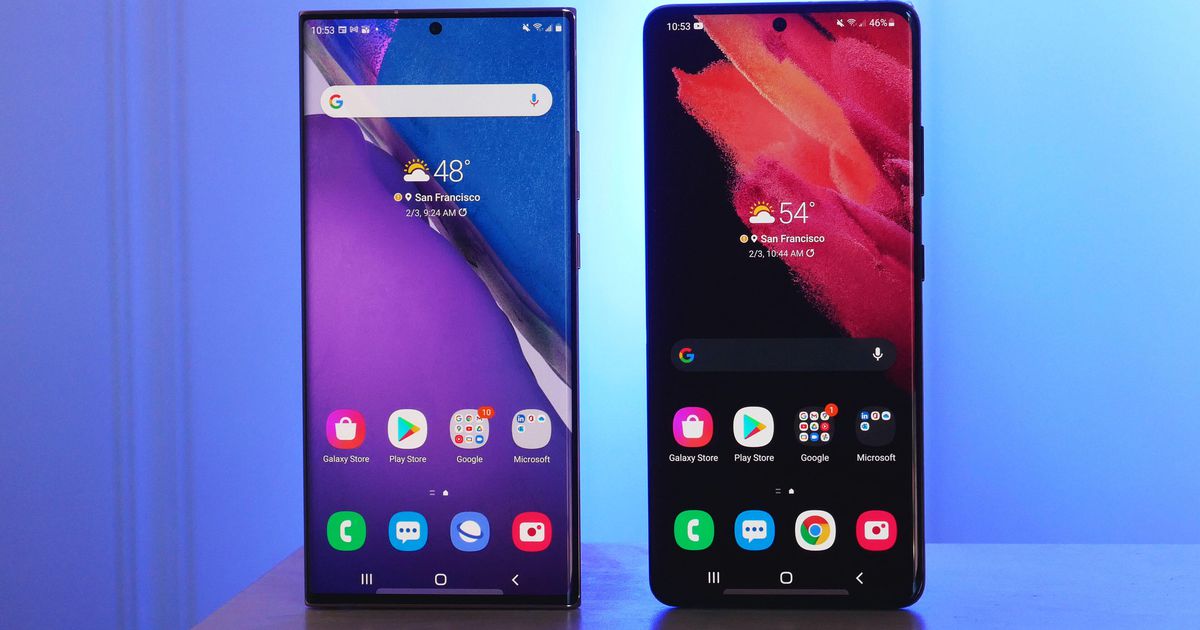 Samsung’s made choosing a premium phone harder than ever with the Galaxy S21 Ultra and the Galaxy Note 20 Ultra, two similarly priced phones with similar specs released within six months of each other. Both have S Pen support, great zoom cameras and 120Hz refresh rate screens, and on paper it’s hard to tell which one is the better buy. To find out, I used them side by side for two weeks comparing them in five different categories: displays, design, cameras, battery and performance.

The S21 is the flagship Android phone to beat. It has a brilliant, 6.8-inch display, Snapdragon’s latest 888 chip and a powerful camera with a 3x and 10x optical zoom. It now has S Pen support like the Galaxy Note, but the stylus doesn’t come with the phone itself, and there’s nowhere to put it if you get one (unless you buy a special case).

This is the phone to buy for those looking for the most fluid S Pen experience as it has low latency and Bluetooth support, so you can use gestures or control your phone with the stylus. And its specs are almost as impressive as the S21’s with a fast processor, great cameras and 8K video recording.

The S21 Ultra feels easier to use one-handed

Both phones have a curved AMOLED screen, with the 6.9-inch Note 20 Ultra just edging out the 6.8-inch S21 Ultra in terms of size. The S21 Ultra is the heavier of the two phones, but I found it easier to use one-handed as the camera is balanced better compared to the domino-style camera module on the Note 20 Ultra.

Both phones are covered in the strongest version of Corning’s glass, Gorilla Glass Victus, but since neither survived our drop test, I’d highly recommend getting a case for them.

For things like gaming, scrolling web pages or watching videos, both displays will look incredible. They have a variable, or adaptive refresh rate of up to 120Hz, which means it’s changing the refresh rate depending on what you’re doing, like a higher rate for gaming, or a lower rate when the phone is standing by. But the S21 Ultra supports the highest WQHD Plus (1440p) resolution in 120Hz while the Note 20 Ultra only supports full HD (1080p) with the adaptive refresh rate. To get the highest resolution on the Note 20 Ultra, you’ll need to drop to 60Hz or the standard refresh rate.

Both phones also have a fingerprint reader hidden under the display, and while I didn’t notice that much difference between the two, anecdotally the S21 Ultra’s sensor felt faster to authenticate and unlock the phone.

The S21 Ultra takes the already super-close zoom on the Note to the next level with two telephoto cameras: One that can optically zoom to 3x and the other 10x, offering more flexibility for photographers who want to get closer to the subject without physically moving closer. The Note 20 Ultra, by contrast, has only one telephoto camera with a 5x optical zoom.

I also noticed that Samsung has improved the image processing of zoom photos taken using hybrid (optical and digital) zoom, which is anything beyond the reach of the telephoto camera. Looking at the same 50x photo taken on both phones, the S21 Ultra’s image is clearer and retains more detail compared to the Note 20 Ultra. You can get up to 100x on the S21 Ultra, but I never found myself using this extreme zoom because the image looks pretty mushy.

General photos of landscapes and scenery look great on both phones and I couldn’t really tell them apart. The main wide-angle camera uses a 108-megapixel sensor on both phones which is useful for cropping after the fact, or making really large prints, but I found the regular 12-megapixel photos were great as well. Both phones use a technique called “pixel binning” on these regular shots that helps to retain lots of detail and good dynamic range.

In low light, I prefer the S21 Ultra, although night mode shots look more processed with greater contrast and less noise than photos taken on the Note 20 Ultra in the same light. Video quality is great on both, especially when filming at 4K. To my eye, the dynamic range is a touch broader on the newer phone, but I’d be very happy with either. The S21 Ultra has an advantage in that it can film on the telephoto camera at 4K/60, whereas the Note 20 Ultra can only use digital zoom at this resolution and frame rate. Both phones film in 8K at 24fps. You can see many more photo and video samples in the video on this page.

S Pen is better on the Note 20 Ultra

Many fans of the Galaxy Note series may have been concerned when they saw the S21 Ultra would support the S Pen, because it could potentially signal the end of the Note family of phones.

The S21 Ultra may be the first non-Note phone with stylus support, but the S Pen doesn’t do quite as much as it can on the Note 20 Ultra, at least not just yet.

Both phones let you draw on the screen, take notes, annotate screenshots, convert handwriting to text or straighten your handwriting in the Samsung Notes app. The S Pen on the Note 20 Ultra also has Bluetooth support, which lets you use air gestures to open the camera or take photos remotely, to name just a few examples. The phone can also ping you if you leave the S Pen behind somewhere. And the Note can also store the S Pen inside the phone, unlike the S21 Ultra — you can buy a separate case with a storage slot for the stylus, but if you’re anything like me, you’d still lose the S Pen regardless of the case.

I couldn’t notice much of a difference in terms of the performance of the S Pen when using it on the two phones side by side, but artists may be able to tell the difference, thanks to the 9ms latency on the Note 20 Ultra. Samsung will release an S Pen Pro later in 2021 that offers Bluetooth support to bring it more in line with the functionality on the Note.

The S21 Ultra has a 5,000-mAh battery compared to 4,500 mAh on the Note 20 Ultra, but a larger capacity battery doesn’t automatically mean you’ll get more juice out of the phone. Usage patterns, 5G connectivity, processing power and display brightness all play a part in overall battery life; I didn’t see a huge difference in battery life between the two phones.

Both phones made it comfortably through a full day of use with juice to spare. At the end of the day of heavy usage running both phones at 120Hz, the WQHD Plus screen (on the S21), filming 4K video and gaming, I was left with anywhere between 10 and 15% battery on the Note, and around 10% on the S21 Ultra. Anecdotally, I felt that the Note 20 Ultra had better standby time overall when I wasn’t using the phone. You can check out our full reviews of the S21 Ultra and Note 20 Ultra for results from our official battery test.

The base storage level on both phones starts at 128GB with the option to go up to 512GB on both, or an intermediate 256GB tier on the S21 Ultra, but only the Note 20 has the option to expand with a microSD slot. The S21 Ultra also misses out on the charger in the box, as well as MST support in Samsung Pay.

Depending on where you live, you’ll either get a Snapdragon or Samsung’s own Exynos processor. I’ve only tested the Snapdragon 888 on the S21 Ultra and 865 Plus on the Note 20 Ultra, so can’t comment on Exynos performance, but both phones never left me wanting when it came to trimming 8K videos, gaming or running a myriad of apps at a time.

The Galaxy S21 wins, but not by much

In the end, I found that these phones share so many of the same features that it doesn’t make sense to upgrade from the Note 20 Ultra to the S21 Ultra if you already have the (slightly) older phone. But improvements in the camera, S Pen support and a more balanced one-handed feel was enough to sway me to choose the S21 Ultra if I was looking for the best overall Galaxy experience.