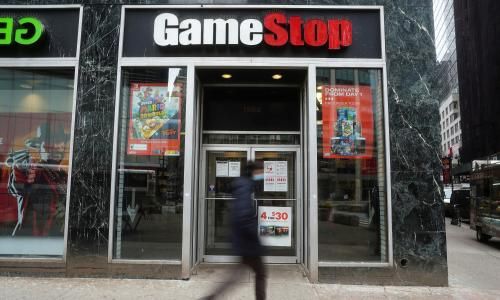 The three largest shareholders in GameStop, the video game retailer at the center of a frenzied dual between Wall Street and small investors, have made more than $2bn from the company’s astronomic recent share rise.

Stock in the company continued its vertiginous rise on Wednesday, hitting a fresh 52-week high of $354.83, making the 13% stake held by Ryan Cohen, 34, GameStop’s largest single shareholder, worth more than $1.3bn.

Over the past two weeks, according to CNBC, Cohen’s net worth increased an average of $90m a day, or nearly $4m per hour, as GameStop stock has surged more than 1,550% this year alone.

Other winners include Donald Foss, the 76-year-old founder and former CEO of Credit Acceptance Corp, a subprime auto lender. Foss bought 5% of GameStop early last year for around $12m. His stake is now worth more than $500m.

GameStop chief executive George Sherman has seen his 3.4% stake jump to a value of about $350m.

But some in Wall Street are also making huge gains. BlackRock, the world’s largest asset manager, owned 9.2m shares in GameStop at the end of December, according to a regulatory filing. If it still holds all those shares, they were worth more than $3bn on Wednesday.

The gains comes as thousands of small investors have poured into the stock and forced Wall Street hedge funds, including Melvin Capital and Citron, which were betting on GameStop’s collapse, to take billions in losses.

The trading frenzy over GameStop drew comment from the incoming Biden administration on Wednesday with the treasury and other regulators announcing they were monitoring the situation.

Cohen was a catalyst in the company’s phenomenal share price rise. Last year the investor and founder of Chewy, an online retailer of pet products, bought a stake in GameStop and launched a campaign for the company to move faster into the digital age to compete with Amazon.

In January Cohen and two allies joined GameStop’s board. Despite the record rise in the company’s share price it is still planning to close up to 450 stores this year.

On Wednesday evening, Reddit chat room that drove the GameStop stock surges was briefly made private. The page also said it had experienced an “unprecedented” scale of interest and was facing technical difficulties.