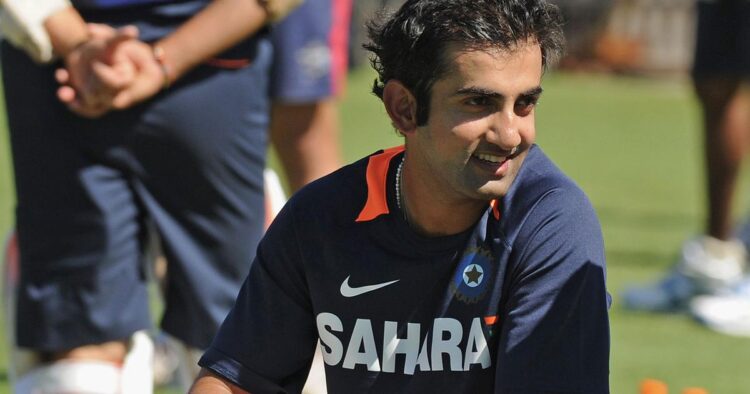 Paddy Upton, India’s Mental Conditioning and Strategic Leadership Coach in 2011, remembered the contribution of Gautam Gambhir in the final as he called him ‘the glue that kept the great batting line-up of that era together.’

The Indian cricket team last lifted a Cricket World Cup in 2011. There were euphoric scenes at the Wankhede Stadium in Mumbai as MS Dhoni-led Team India lifted the World Cup after 28 years of wait.

India chased down Sri Lanka’s target of 274 runs in the 49th over to be crowned world champions. India stuttered at the start but managed to get to the target due to the brilliance of Gautam Gambhir and MS Dhoni. India lost the wickets of Virender Sehwag and Sachin Tendulkar early in their run-chase and it transferred the pressure on the remaining batsmen.

But Gautam Gambhir stuck around to deliver a career-defining knock of 97 to take India close to the target.

“There was that additional pressure and disappointment of having Sehwag and Tendulkar back in the change room. But the reality was, you had two of the best high-pressure players in the team – one of them at the crease – Gautam Gambhir. Gary Kirsten used to call him the rock. He spent most of his career as Sehwag’s sidekick,” Paddy Upton told cricket.com.

Skipper MS Dhoni promoting himself over Yuvraj Singh at a crucial stage of the 2011 World Cup final against Sri Lanka is one of the most intriguing and talked-about subjects in Indian cricket.

Yuvraj Singh had been in great form throughout the tournament, with both bat and ball, but according to Paddy Upton the reasons were both cricketing and the captain’s determination to rise to the big occasion to leave his own indelible mark on the tournament. MS Dhoni’s unbeaten 91 off 79 balls, and the soaring six over long-on off Nuwan Kulasekara that sealed glory, is one of the most memorable images in Indian cricket.

Paddy Upton: Gautam Gambhir Was The Glue That Kept The Great Batting Line-up Of That Era Together

Over the course of the World Cup, the left-handed Yuvraj Singh contributed 362 runs, 15 wickets, four Man of the Match awards, culminating in the Player of the Tournament honour. MS Dhoni’s highest score going into the final was 34 against Ireland.

“Sehwag would be the guy who used to be on the highlights package and play the flamboyant cricket and get the crowd cheering. Gambhir would just squirt the ball with that square drive behind backward point. He wouldn’t get the crowd going and he wouldn’t make it to the highlights package, but Gambhir was the glue that kept the great batting line-up of that era together,” Paddy Upton added.

“Although he had not delivered with the bat for seven games until then, MS Dhoni was at that time, probably still is, the best in the world when it comes to second innings chase in white-ball cricket. So, we really did have, in truth, our two biggest guns or two biggest bullets still in the chamber.”

Gautam Gambhir has made match-winning contributions in two finals he has played in. He top-scored for India in the 2007 World T20 final against Pakistan and also had scored the most runs in the 2011 World Cup final.

The former India opener, who has scored more than 10,000 international runs in 242 games across formats, batted at No. 3 mostly in the 2011 World Cup. The 11 who featured in that final never played together again. That should definitely trigger some nostalgia. For Gautam Gambhir, however, it is more of an unanswered question.