Home News Georgia has a new congresswoman in Marjorie Taylor Greene. Some are embarrassed. Others not so much.

Georgia has a new congresswoman in Marjorie Taylor Greene. Some are embarrassed. Others not so much. 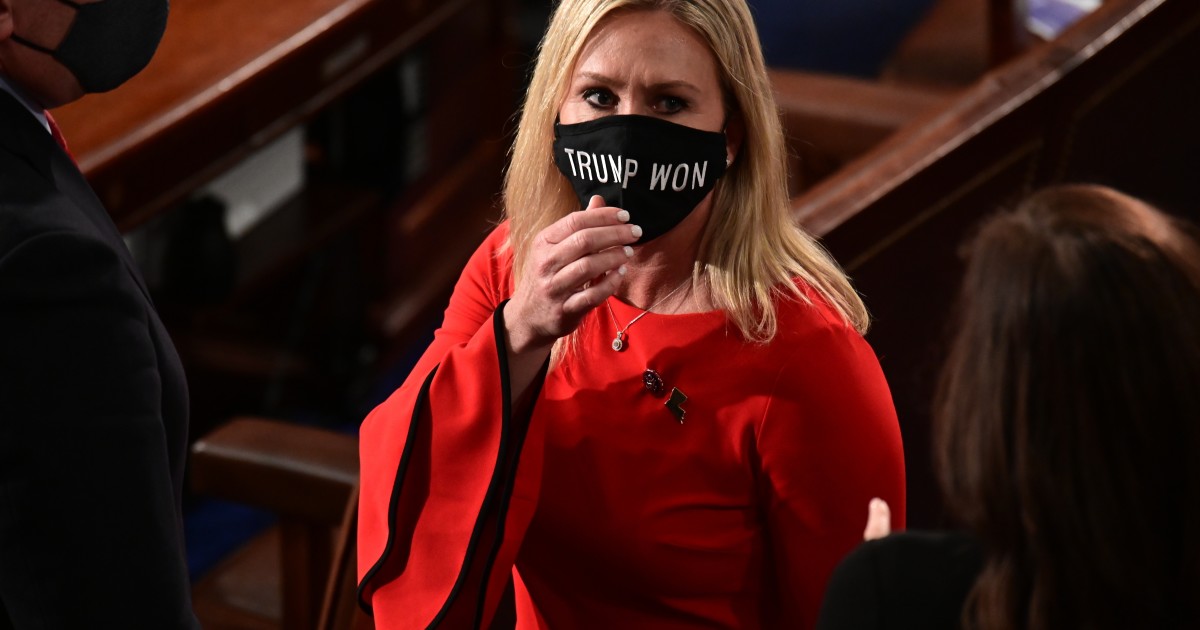 For more than eight months, John Cowan has been something of a lone voice in northwest Georgia, warning fellow conservatives that Marjorie Taylor Greene is an extremist with a dangerous track record of espousing fringe conspiracy theories.

A neurosurgeon who ran against Greene in the 14th Congressional District’s August Republican primary runoff — and lost by a wide margin — Cowan has not been at all surprised to hear mounting calls for her expulsion from the House during the few weeks since she was sworn in to represent the rural northwest corner of the state.

Cowan said voters knew plenty about Greene, a brazen 46-year-old now facing a firestorm of national criticism including accusations of inciting the violent Jan. 6 storming of the Capitol with false claims of election fraud. Her views as seen on social media have included supporting racist, anti-Semitic and anti-Muslim positions.

“A lot of people call me and say, ‘Wow, we didn’t know she was really going to be this way!’” Cowan said. “We knew what we were getting.”

Day after day, media outlets have reported examples of Greene’s embrace of conspiracies in the years before she ran for office.

She has promoted QAnon, the debunked conspiracy theory that imagines former President Trump is leading a fight against a government controlled by a global deep state cabal of Satan-worshiping pedophiles. On social media, YouTube videos and elsewhere, she has said Muslims don’t belong in government, suggested the 2018 Parkland, Fla., school shooting and others were staged, and repeatedly endorsed executing Democratic leaders.

Cowan is clear on what Congress has to do: Expel Greene from the House. That’s what Democratic members of the House are pursuing.

Still, he wondered: “How is the Republican Party going to respond?”

The prospect of expelling Greene, who declined requests to be interviewed for this article, is a thorny issue for Republicans in Washington and Georgia’s 14th District. Privately, many Republicans are critical of Greene, but they are also wary of alienating the Trump base and undermining the popular vote.

“This is not just about Marjorie Taylor Greene, it’s about the fractures within the party nationally,” said Brian Robinson, a GOP strategist and former staffer for former Georgia Gov. Nathan Deal.

“The rest of the delegation cringes,” Robinson said in an interview. “They’re constantly being asked to comment on what she says, and it forces them to take a stand on things that divide their own primary electorate. They don’t want to deal with that headache.”

In a statement Friday posted on Twitter, Greene showed no sign of backing down, noting that the intense media focus on her in recent weeks had allowed her to raise $1.6 million from supporters.

“Every attack. Every lie. Every smear strengthens my base of support at home and across the country,” Greene said. “Because people know the truth and are fed up with the lies.”

A businesswoman who hails from a wealthy family in the Atlanta suburbs, Greene moved to Rome a year ago to run for the seat, positioning herself as a down-home Christian, AR-15-toting Trump loyalist who would fight the “fake news media” and the “DC swamp.”

Most of the local Republican leaders in Rome backed Cowan, but Greene tapped into popular emotions about Trump, threw down more money and utilized her connections with Trump’s former chief of staff, Mark Meadows, and Rep. Jim Jordan (R-Ohio).

During the campaign, Cowan said, a lot of people said: “John, you know, we’ve seen people like you before, smart, whatever, and they’ve just never been able to get anything done. We need somebody who’s going to be a flamethrower up there.”

“I think that’s what they got,” he said. “The problem is she is unable to focus the flames. She’s just kind of like a grenade that goes off.”

After running unopposed in the general election after her Democratic challenger suddenly dropped out of the race, Greene was quick to back Trump’s false claims of election fraud and become a major promoter of “Stop the Steal.”

Greene has taken pains to distance herself from the mob that attacked Congress. But she has also pressed the subject of election fraud, railing against the “fake news” media and filing articles of impeachment against newly elected President Biden.

As Greene returned this week for town hall meetings and other events in the conservative town of 36,000 about 60 miles northwest of Atlanta, some locals were questioning her performance.

State Sen. Chuck Hufstetler, a Republican who represents Rome, called her “extremely irresponsible” and said her “publicity stunts” would rob the 14th District of any power in Congress and make it harder to attract development and new business.

“Enough with the theatrics,” urged an editorial in the the Dalton Citizen newspaper. “Please get to work — for us.”

Even some Republicans who voted for her were rolling their eyes.

“What she says seems so far-fetched,” said Blenda Laird, a 58-year-old laundry room attendant who voted for Greene thinking she was down to earth and would take a stand against crooked, rich politicians. “I don’t know. I think she’s turning a little too radical on me now.”

“It’s embarrassing,” said Jared Hall, a 33-year-old operations manager of a financial equipment company, who voted for her, hoping she would at least try to keep government spending down and help small businesses. “I didn’t think she would do this.”

But even though he was disappointed in her performance, he didn’t think her social media comments posed much risk.

“I think there’s enough checks and balances in place that would prevent her from being able to do anything of permanent significance,” Hall said.

Many Republicans reveled in her performance so far, hailing her as a straight-shooting politician who had the guts to do what she said she would do.

“I think she speaks for the area,” said Brian Crisp, a 49-year-old Baptist pastor from the tiny nearby town of Aragon, as he strode across the parking lot of the Rome Civic Center on Tuesday night to attend Greene’s first town hall meeting.

He rejected the idea that Greene had embraced conspiracy theories.

“I think she’s getting the truth out there,” he said. “I think the media has kept the truth from the people. And I think that the Silicon Valley and the Democratic Party and the media is covering it up.”

Crisp had not heard news reports that Greene had supported executing Democratic politicians. Asked about it, he said: “Oh, wow!”

He paused for a second.

“It’s a shame that on social media everything that people say is being used against people,” he said. “It’s kind of sad to me, because a lot of times people don’t mean anything.”

He was “not real concerned” that Greene had previously espoused violence: “Everybody’s got an opinion,” he said.

Inside the Rome town hall, Greene stepped toward a wooden lectern without a mask and told a cheering crowd of constituents: “I love you!”

“I want to make sure I can see as many people as I can see and get out and answer questions,” she said.

But many members of the public were not allowed in. Dozens of constituents who tried to sign up online were informed they could not register “due to COVID-19 capacity limitations” — a response some found ironic given Greene’s resistance to wearing a mask or social distancing.

After sniping against Democratic House Speaker Nancy Pelosi and the “House of Hypocrites,” Greene took pains to distance herself from the “awful” attack on Congress, insisting that Trump did not incite an insurrection.

Asked by a resident what was the most pressing issue facing the country, she said, “This disgusting Trump derangement syndrome that the Democrats are still afflicted with.”

“We need to take the gloves off,” she urged. “The old Republican ‘be nice and work across the aisle’ playbook doesn’t work anymore.”

After the meeting, Luke Martin, Floyd County GOP chair, said his view of her had “changed in a positive way.” A local district attorney who backed Cowan in the runoff, he said Greene was “taking to the job well” and had “a lot of well thought-out ideas.”

“I never saw her call for violence. I would be very shocked if she did that,” he said.

Later, Martin was asked about a comment Greene made a week before the election saying the way to defend freedom was with “the price of blood.” He said Greene’s local campaign involved “pretty well dialed-down” messaging.

“You know, stop socialism, save America, be strong, have a backbone, stand up not only to the Democrats, but the weak Republicans,” he said. “I think that’s what the people in the district voted for.”

Going forward, many local Republicans said they did not support calls for Greene’s expulsion from the House.

“We’re stuck with her” for at least two years, said Mickey Tuck, the vice chair of the Floyd County Republican Party, who supported Cowan in the runoffs and was not allowed to attend the town hall. “It’s up to the voters here to decide whether she remains in Congress.”

In 2018, Georgia House Speaker David Ralston forced a legislator to resign after he dropped his trousers and repeatedly used the N-word on a TV show. Last year, Ralston stripped a lawmaker of his committee chairmanship after he disparaged late civil rights icon and congressman John Lewis, and this week he booted another from the House chamber after he repeatedly refused to get tested for the coronavirus.

“The Republican Party in Georgia does have a minimum standard of behavior,” Hufstetler said. “I don’t want to tell Congress what to do. But they certainly need to take care of this because it hurts the Republican Party.”