The number of COVID-19 patients in intensive care nationwide has soared from just over 360 in early October to more than 3,500 last week 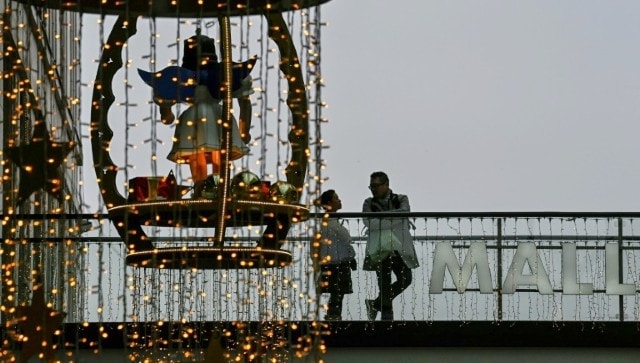 Customers stand on a balcony next to Christmas decorations in a shopping mall in Berlin. Germany plans to ease virus curbs for Christmas. AFP

Germany, once a beacon of hope in Europe’s coronavirus

nightmare, logged its one-millionth case on Friday, as questions emerged over just how much protection is offered by one of the leading vaccine candidates.

Like much of the continent, Germany is battling a resurgence of a pandemic that shows little sign of retreating before the release of several leading inoculations.

But the developers of one of the jabs, British pharmaceutical giant AstraZeneca, said Thursday that further research was needed after mixed results were produced in a late-stage trial.

guidelines, despite the US registering a six-month high of more than 2,400 deaths.

Germany had largely contained the spread of the virus in the spring but has been hit hard by the second wave of infections.

Its Robert Koch Institute for disease control recorded more than 22,000 new daily cases on Friday, pushing the country’s total beyond the 10 lakh mark.

The number of COVID-19

patients in intensive care nationwide has soared from just over 360 in early October to more than 3,500 last week.

But the rules will be temporarily eased over Christmas and New Year to accommodate the celebrations, allowing meetings of up to 10 adults from December 23 to New Year’s Day.

Many nations are pinning their hopes on a vaccine to end the misery, with two jabs on the cusp of approval by authorities after showing about 95 percent efficacy in trials.

But a third candidate by AstraZeneca faced uncertainty Friday after researchers accidentally discovered it performed best when a half dose is given followed by a full one, rather than two full doses.

The vaccine has nevertheless been submitted to Britain’s regulator for approval.

In the meantime, much of the world faces a gloomy winter dampened by lockdowns, economic anxiety, and devastating human loss.

US President-elect Joe Biden however offered a message of hope on Thursday in a Thanksgiving video address that rallied Americans to pull together to defeat the outbreak.

“I know better days are coming, I know how bright our future is. I know the 21st century is going to be an American century,” he said.

Biden said he normally travels to the New England coast for a big family feast but would be staying home in Delaware this year for a small get-together.

“I know this isn’t the way many of us hoped we’d spend our holiday. We know that a small act of staying home is a gift to our fellow Americans,” he said.

But Trump’s White House urged “all Americans to gather, in homes and places of worship” despite the health risk.

Anthony Fauci, America’s top infectious disease expert, said he was expecting “a surge superimposed upon a surge” caused by the holiday festivities despite many being toned down.

The Macy’s Thanksgiving Day Parade in New York, a cherished tradition nearly a century old featuring giant balloons and colourful floats, went ahead in a truncated made-for-TV celebration across just one city block, with no crowds and much of it pre-recorded.

Globally, more than 60 million infections and 1.4 million deaths have been recorded since the new coronavirus

emerged in China late last year, according to a tally compiled by AFP from official sources.

Countries that have seen strong success against the virus are now cracking down on new outbreaks.

South Korea closed bars and nightclubs this week as it braces for a third major wave, with virus cases at their highest level since March.

Britain and France meanwhile are mulling easing lockdowns soon, but authorities have said restrictions will remain.

“Basically what the prime minister is trying to do is save our lives, and I don’t think people understand the seriousness of it,” said David Walker, 75, a care worker in Darlington, north England.

“I think common sense has gone out of the window.”