A poll percentage of 35.80 was recorded till 5 pm. Top BJP leaders including Yogi Adityanath, Home Minister Amit Shah and JP Nadda had taken part in the camapigning 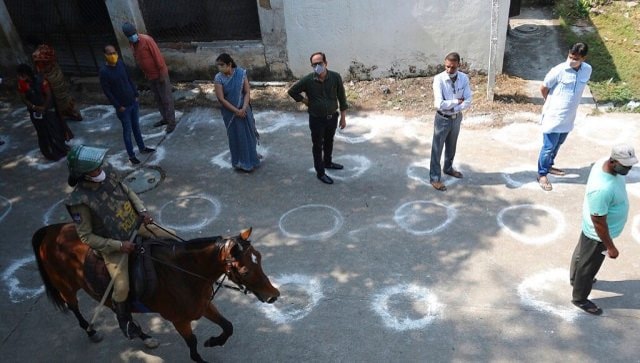 People wearing face masks as a precaution against the coronavirus waiting in a queue to cast their votes during the Greater Hyderabad Municipal Corporation (GHMC) elections in Hyderabad on 1 December. AP

Hyderabad: A high-decibel, no holds barred campaign involving a battery of BJP leaders such as Union Home Minister Amit Shah versus the ruling TRS for the Greater Hyderabad Municipal Corporation (GHMC) election was followed by low voter turnout on Tuesday.

About 35 percent of the 74 lakh-odd voters turned up to cast their votes. Counting of votes will be taken up on 4 December.

Polling passed off peacefully, but not without any glitch, as repoll was ordered in ward number 26 owing to a symbol mix-up involving the two Left parties —CPI and CPM, officials said.

Ballot papers were used in total 150 wards of the corporation.

Aiming to cash-in on its surprise success in the recent Dubbak Assembly bypoll, the BJP seemed to have upped the stakes in the civic polls in the state capital, fielding the “who’s who” of the saffron party, from Shah to UP Chief Minister Yogi Adityanath to Smriti Irani, for canvassing of votes.

While Shah assured development to the southern city and free it from “Nizam Culture” if voted to power, UP chief minister Adityanath, whose administration changed the names of Faizabad and Allahabad in his state to Ayodhya and Prayagraj, respectively, said Hyderabad could follow suit to become ‘Bhagyanagar’ if his party captured GHMC.

The saffron party leaders also targeted AIMIM chief and Hyderabad MP Asaudddin Owaisi during their campaign and accused the ruling TRS of having a tacit understanding with it.

In his lone public address, he alleged some “divisive forces” were trying to enter the city to disturb peace and tranquility, while billing his party as “progressive”.

During the campaign, state BJP president and MP Bandi Sanjay Kumar stoked a row when he said his party would be ready, if necessary, to conduct a “surgical strike” in the old city to send away Rohingyas and Pakistanis.

For its part, AIMIM courted controversy when its leader and Asaduddin Owaisi’s brother Akbaruddin in a poll campaign asked whether the “samadhis” of former Prime Minister PV Narasimha Rao and TDP founder NT Rama Rao, built on the Hussain Sagar lake bank, would be removed as he questioned the eviction drive against “poor people” residing near water bodies.

On Tuesday, a low voter turnout was recorded in the poll though the campaign for the election had been vociferous.

The polling began at 7 am and concluded at 6 pm and went off peacefully without any major incident, a police official said. The voter turnout was 35.80 per cent till 5 pm and the final poll percentage would be released after compilation and as per the procedures, official sources said.

The Telangana State Election Commission (SEC) ordered repolling in all 69 polling stations of Ward number 26 after it was found that the symbol of CPM was printed in the ballot paper instead of CPI, an official release said. The repoll would be held on 3 December.

As many as 74.44 lakh voters were supposed to exercise their franchise while 1,122 candidates were in thefray in a battle between the ruling TRS and the opposition BJP and Congress.

Criticising the ruling TRS over the low turnout, BJP leader and Union MoS (Home) G Kishan Reddy said it should “hang its head in shame.” The TRS used the SEC for its “selfish politics” and indulged in misuse of power, he alleged.

Observing there was time till February to conduct the polls, Reddy said the elections could have been conducted by trying to promote public awareness and making effective arrangements.

Meanwhile, special arrangements were made in view of COVID-19

pandemic and the SEC enabled the virus-infected persons to either vote at polling stations physically or use postal ballot. In case the COVID-19

patients have not used postal ballots, the poll panel allowed them to cast their vote in the final hour — from 5 pm to 6 pm.

However, they were mandated to wear mask, face shield and gloves, the SEC said.