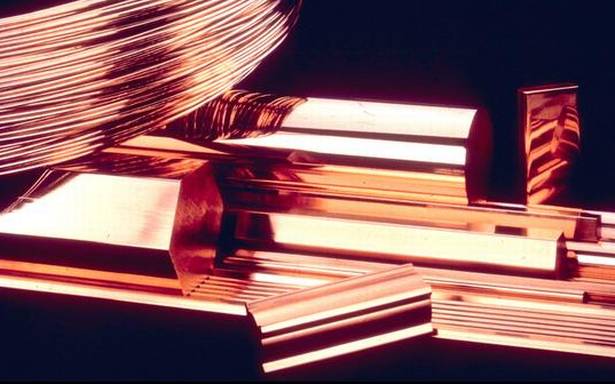 Copper prices in the global market continue to gain with prices topping $9,000 a tonne for the first time in 10 years on Monday.

Reuters reported that prices surged on expectations of a pick-up in demand after the Chinese Lunar New Year last week.

According to the Trading Economics website, copper has gained over 20 per cent since the beginning of 2021.

Expectations of stimulus to help the economy recover from the impact of the Covid-19 pandemic is driving up industrial demand and, in turn, copper.

After having crashed to lows in recent years of $4,500 a tonne in March last year, copper has been on an uptrend since then, thanks to measures undertaken by central banks and governments across the world to shore up the economy.

According to Pankaj Kumar, CEO, Sterlite Copper, the world is seeing a strong recovery as it comes to terms with the pandemic and the commencement of vaccine roll-out.

“The resumption of operations by conventional manufacturers, in addition to growth of emerging sectors such as EVs and renewables as part of decarbonisation efforts globally, is also driving the increasing demand for copper,” he said.

Dutch multinational banking and financial services group ING said in a report that funds have turned enthusiastic on copper in view of a long-term bull narrative rooted in the metal’s increasing usage in electrification.

With European Union leaders deciding at a meeting on December 11 last year to cut carbon emission by 55 per cent before 2030 compared to the levels in 1990 levels, it reinforced the optimism over copper’s medium and long-term outlook, Yao said.

Global investment and financial firm Citibank said increased spending on global infra infrastructure was bullish for copper as there will be a massive build-up in demand.

Kumar said prices have gained also due to a drop in availability of copper scrap due to a pause that lasted for months in production. “Comprising 25-30 per cent of the global copper market, this (scrap) paucity is also impacting prices,” he told BusinessLine.

Supply factors were impacted by the slow resumption of copper mining activities, which also reflected the price spike, the Sterlite CEO said.

The unrelenting march of copper is particularly attributed to the aggressive target fixed by the United Kingdom and other EU nations to replace vehicles running on fossil fuels with electric vehicles (EV).

This will result in higher demand for copper. A car that runs on fuel such as petrol is made of parts that include 25 kg of copper. But at least 80 kg of copper will be required for an EV.

Citibank said that though EVs have got the “most attention recently”, the growing global demand for electricity goes far beyond just EVs.

In addition, China’s quick recovery from the effects of Covid-19 last year and its increased exports of air-conditioners and refrigerators have resulted in higher use of copper for tubes and pipes.

Rating agency Care said that strong demand, especially in China, is expected to hold copper prices on the higher prices.

Sterlite Copper’s Kumar said if the “contributing factors continue in the current state”, copper could be ruling on the higher side in the coming months.

“It will take new sources of copper supply some more time to come online. So, till then the high trend is likely to continue into the first half of FY22,” he said.

The Sterlite CEO said that it would take 5-7 years to develop copper mines and make them part of the global supply chain.

“A clear deficit is emerging in between the burgeoning demand we are seeing for copper from conventional and emerging sectors, and the ability of copper miners to meet that demand due to Covid-related complications,” he said.

Rating agency Care said copper concentrate supply was disrupted due to the pandemic and adverse weather in Peru, Australia, Mexico and the US.

“World refined copper balance in the first ten months of last year indicates an apparent deficit of about 4.80 lakh tonnes due to strong Chinese demand. Chinese apparent usage increased by 14 per cent offsetting usage declines in other regions of the world,” it said.

Analysts also point out to dropping inventories in copper, while demand is expected to remain strong this year. Most analysts see copper touching $9,500 and even $10,000 a tonne. Some even see a bullish case for the metal to hit $12,000.

“On the one hand, you have increased demand boosted by economic recovery and, on the other, you have copper manufacturers struggling to meet the supply requirements,” he said.

As regards how the copper price spike will impact India, Kumar said India is not in the best place right now, in terms of the copper market.

“As a developing economy, copper is critical to its continued growth. However, with copper prices rising at the levels we are seeing now, there is bound to be an impact on economic activities utilising the metal,” he said.

“Domestic copper industry has been operating at almost half of its capacity since the last two financial years due to closure of Vedanta’s four lakh tonnes copper smelter at Thoothukudi,” the agency said.

The domestic copper industry has been operating at half the capacity of eight lakh tonnes per annum since May 28, 2018, after the Sterlite Copper plant in Thoothukudi was ordered shut on May 28, 2018, by the Tamil Nadu government.

The orders were issued after protests demanding the unit be closed turned violent on May 22, 2018. In the police firing to control a violent mob, 13 persons were killed.

Vedanta Resources, the UK-based group which owns Sterlite Copper, has petitioned the Supreme Court against the closure after the Madras High Court upheld the State government’s order shutting the unit down.

Kumar said current exchange rates were also “disadvantageous to the import-dependent economy”, while the Union Government was taking some positive measures with a new scrap policy.

In the Budget presented on February 1, Finance Minister Nirmala Sitharaman pared import duty on import of copper scrap to 2.5 per cent from 5 per cent.

“But till these are widely adopted, there will be a market slowdown in copper-related manufacturing,” he said, adding that sectors depending on copper would pare down any activities until prices cool down to more conducive levels.

The increase in price could also affect the quality of production in sectors using copper since producers could look out for efficient alternatives.

“This is going to affect the longevity of products and perhaps translate into higher maintenance costs for consumers as well,” the Sterlite CEO said.

India could spend 30-35 per cent more on importing copper as demand for the metal could increase due to higher spending on infrastructure development, he said.

“India has missed the bus in terms of meeting increasing demand domestically and is now forced to import increased quantities of copper at the prevalent high prices,” he said, pointing out India could continue to be a net importer this year too.

Back to Top
Close Add post
X
From escape mutations to wild strains: Here’s everything you need to know about Covid variants…BusinessThis transmission electron microscope image shows SARS-CoV-2—also known as 2019-nCoV, the virus that causes COVID-19. isolated from a patient in the U…