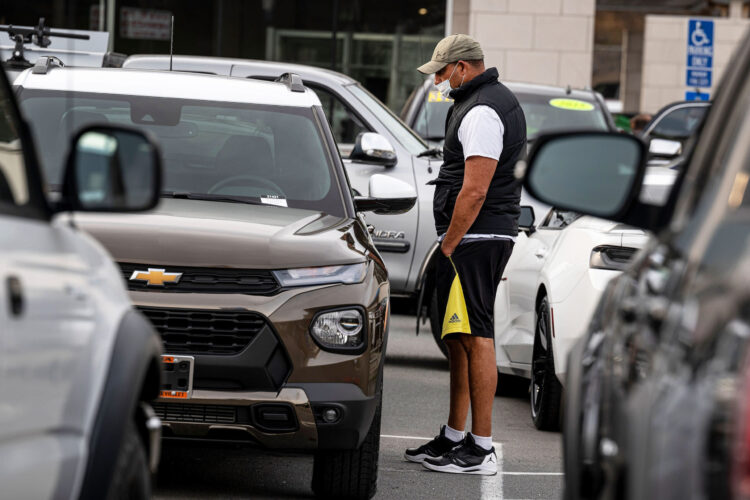 A customer looks at a General Motors Co. Chevrolet vehicle for sale at a car dealership in Colma, California, on Monday, Feb. 8, 2021.

The Detroit automaker said Thursday it sold 642,250 vehicles during the first three months of the year, up 3.9% compared with a year earlier, when Covid-19 started forcing dealerships and auto plants to shutter in March.

GM and the majority of other major automakers in the U.S. are scheduled to report first-quarter sales on Thursday. Analysts expect sales across the industry to be up about 8% or 9% compared with the first quarter of 2020 despite automakers reeling from a shortage of semiconductor chips.

GM said retail sales to individual consumers increased 19% in the first quarter, while fleet sales to corporate and government clients declined 35% from a year earlier. The automaker expects consumer demand to remain resilient throughout this year.

“Consumer confidence and spending will continue to increase due to stimulus, rising vaccination rates and the progressive reopening of the economy,” GM’s chief economist, Elaine Buckberg, said in a release. “Auto demand should remain strong throughout the year.”

GM’s Buick, Cadillac and GMC brands saw double-digit sales increases during the first quarter, while Chevrolet – its largest brand – declined 1.7%. Chevrolet’s drop was due to a 12.5% decrease in sales of its Silverado full-size pickup trucks, which the automaker attributes to a lack of inventory due to production and shipping disruptions from the coronavirus and chip shortage.

Automakers that are traditionally less reliant on fleet sales in the U.S. had better sales than GM in the first quarter. They include: Volkswagen, up 21%; Toyota Motor, up 21.6%; Hyundai Motor, up 28%; and Kia Motors, up 22.8%. While Stellantis – the merged automaker of Fiat Chrysler and France-based Groupe PSA – reported a 5.1% increase in sales, including a 25% increase in retail sales. Ford Motor said its first-quarter sales were up 1%.

Hyundai’s sales were particularly impressive. For the quarter, the South Korean automaker’s results were led by a 38% increase in retail sales, including its best monthly retail and total sales ever in March.

“We had a terrific month. All-time records, I mean almost unexpectedly,” Jose Munoz, CEO of Hyundai North America, said Thursday on CNBC’s “Squawk on the Street.” “I have to be optimistic, however there are a lot of challenges these days in the automotive industry.”

Automakers and parts suppliers began warning of a semiconductor shortage late last year after demand for vehicles rebounded stronger than expected following a two-month shutdown of production plants last spring due to the coronavirus pandemic.

Semiconductor chips are extremely important components of new vehicles for infotainment systems, power steering and brakes, among other systems. The parts can contain several sizes and different types of chips.

“This chip shortage is impacting everybody. We’re not an exception,” Munoz said. “We hope that if in the next four to five months, the situation gets better, perhaps Q3, Q4 will see a recovery. But for the time being we have to manage very carefully and try to optimize as we are doing so far.”

Hyundai has been less impacted by the chip shortage than others such as the Detroit automakers, each of which has announced substantial production cuts to domestic plants.

Most recently, Ford announced plans Wednesday to cut production at six plants in North America due to the problem, including facilities that produce highly profitable pickup trucks.

Consulting firm AlixPartners estimates the chip shortage will cut $60.6 billion in revenue from the global automotive industry this year.