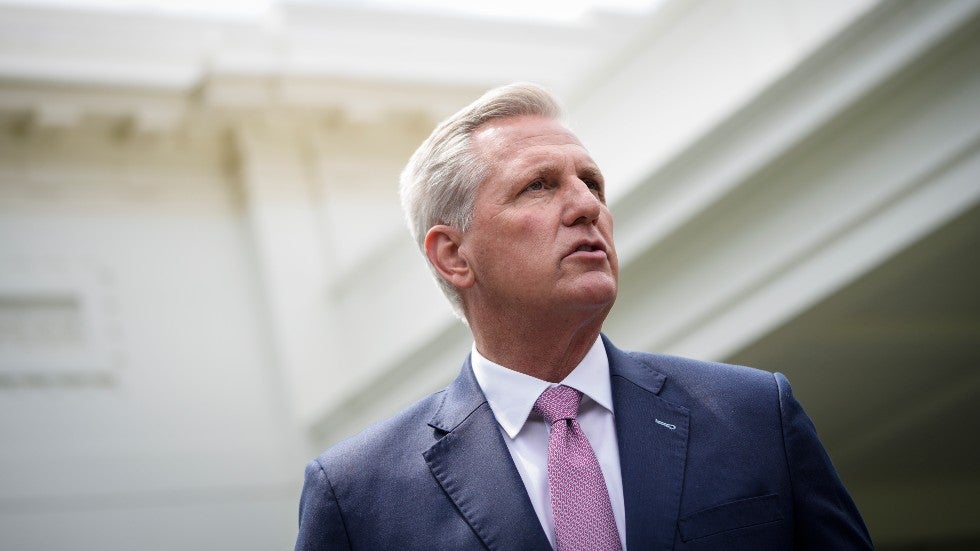 The House Republican leader not only has his eyes set on the Speakership after next year’s midterms, he was also the only lawmaker to speak directly to President Trump

Those seemingly unrelated facts are in fact related in the context of the debate over the Jan. 6 commission. The dynamics make McCarthy unique among Republicans — and leave him with an equally unique dilemma.

To achieve the Speaker’s gavel, he’ll likely need the blessing of Trump and his loyalists in Congress. But revealing details of the Jan. 6 phone call could put McCarthy in the doghouse with the former president, whose outsize popularity with Republican voters has kept him a kingmaker, even from self-exile at his Mar-a-Lago resort.

McCarthy insists that he’d testify about the events of Jan. 6 if called to do so by an independent investigative commission. “Sure,” he succinctly told reporters Thursday. But he’s also opposing the creation of such a commission, which makes moot any claims to cooperation.

“I just think a Pelosi commission is a lot of politics,” said McCarthy, explaining his opposition to the commission.

Shortly after the attack, McCarthy was one of the first congressional leaders to call for a bipartisan 9/11-style commission to probe the Jan. 6 attack. And weeks later, he gave Rep. John Katko

But when Katko and Thompson unexpectedly announced last week they had struck a bipartisan deal, McCarthy appeared cool to the idea. By Tuesday, one day before the House vote on the measure, the GOP leader announced his formal opposition to the bipartisan deal, arguing that the panel should have a broader scope and examine political violence that happened both before and after the Jan. 6 attack.

The passage of several months meant that GOP lawmakers felt less urgency to act on a commission. Republican leaders and rank-and-file members also realized during that time that Trump — sequestered in Florida and still booted off Twitter — wasn’t going away, that he was still the single-most powerful force in the party, and that he was threatening to back primary challengers to fellow Republicans he viewed as disloyal.

The vote to create the Jan. 6 commission represented just the latest test of GOP loyalty to Trump; just 35 Republicans joined all Democrats in voting to pass the Jan. 6 legislation.

In the eyes of his colleagues, McCarthy was simply reading Trump and his conference when he came out against the commission.

“If you look at the 212 members we have, you have to look at where members were at. Where’s your conference at?” said one House GOP lawmaker, a McCarthy ally. “As you saw, the vast majority of the conference was not supportive of it, and those are the people that he represents.”

Privately, some GOP members have ripped McCarthy, either for his handling of Rep. Liz Cheney

Elizabeth (Liz) Lynn CheneyTrump’s ‘big lie’ is just a ploy The Hill’s Morning Report – Presented by Facebook – Republicans seek to sink Jan. 6 commission Michigan judge rejects one of last challenges to 2020 election results MORE’s (R-Wyo.) ouster from leadership last week or his decision to oppose the Jan. 6 deal cut by Katko. But publicly, even some lawmakers who broke with McCarthy praise his efforts to manage all the competing factions in the party.

“Kevin McCarthy is in great shape,” said Rep. Dusty Johnson (R-S.D.), who backed the commission. “Clearly, in any given day there are going to be disagreements in any large diverse conference like Republicans have, but Kevin McCarthy has done a lot of things right and the overwhelming bulk of the membership acknowledges that.”

The Jan. 6 legislation now faces an uncertain future in the 50-50 Senate. But if it ever gets established, the 10-member independent commission would almost certainly focus on a now-infamous phone call between McCarthy and Trump as the Capitol was under siege by a pro-Trump mob.

The GOP leader was the first to reach Trump and alert him to the riots, and according to McCarthy the two closed out the call with an agreement for Trump to “put something out” to quell the riot.

But recounting from other members of Congress relayed a much more desperate plea from McCarthy as the Capitol — and even his own office — came under attack.

Jaime Lynn Herrera BeutlerCheney set to be face of anti-Trump GOP Uninvited Trump is specter at GOP retreat McCarthy defends Trump response to deadly Jan. 6 riot MORE (R-Wash.), one of the 10 in her party to vote to impeach Trump, told a local paper, The Daily News.

She later wrote in a statement that became evidence in Trump’s impeachment trial: “That’s when, according to McCarthy, the president said: ‘Well, Kevin, I guess these people are more upset about the election than you are.’”

The deal struck between Thompson and Katko addressed several GOP demands: It calls for an evenly split panel, with five Democrats and five Republicans; co-equal subpoena power for both parties; and a Dec. 31 deadline for the commission to submit their report — an effort to keep the work of the commission from seeping into the 2022 election cycle.

Trump doesn’t care about any of those details; he flat-out opposes any investigation into the attack or his role in it. And in a statement Thursday, the former president warned he could seek retribution against the nearly three dozen Republicans who went against his wishes.

“See, 35 wayward Republicans — they just can’t help themselves,” Trump said. “We have much better policy and are much better for the Country, but the Democrats stick together, the Republicans don’t. They don’t have the Romney’s, Little Ben Sasse

“Sometimes there are consequences to being ineffective and weak.”

Still, some Republicans argued that McCarthy could benefit from such a commission; it would allow him and other Republicans to testify about what they heard and saw on Jan. 6, and resolve unanswered questions.

“I don’t think that Leader McCarthy has anything to hide from the conversations that he had with the President on January the sixth where he was pretty straightforward that the president needed to engage and call this off,” said former Rep. Zach Wamp, a Tennessee Republican who lobbied for the 9/11 commission while in Congress and served with McCarthy.

“We need to know exactly what happened,” Wamp said, “and I think it’s in his best interest to kind of clear the air over what did happen.”