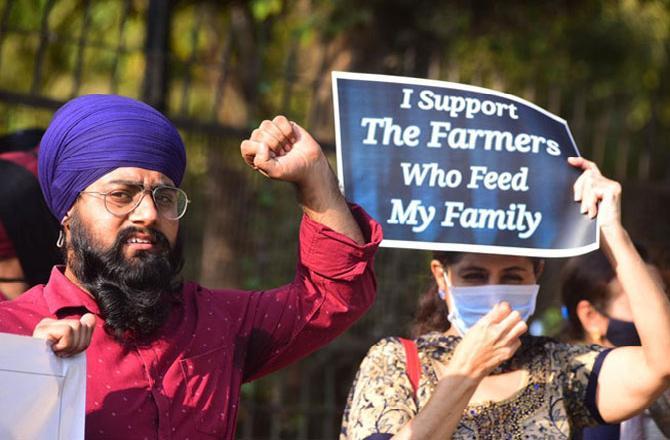 Union Agriculture Minister Narendra Singh Tomar on Thursday said that the government is open for more discussions with farmers and they should give a date for the same and leave their agitation.

The minister said at a press briefing that the government had sent proposals to farmer unions. He said the government is ready for open-minded discussion on provisions farmers have an objection against.

“We gave a proposal to farmers. We have expressed ourselves. If they want to discuss further, we are ready to talk to them. I had asked that they should leave agitation. And when discussions are on they should not have called further agitation,” he said.

“We sent a proposal to farmers. They wanted the laws to be repealed. The government is ready for open-minded discussion on provisions they have an objection against. Laws do not affect Agricultural Produce Marketing Committees (APMCs) or MSP. We tried to explain this to farmers,” he added.

The minister said that the Minimum Support Price (MSP) will not be affected by the farm laws recently enacted by the Centre.

“The entire country has witnessed that Swaminathan Commission report came in 2006 and the recommendation about giving MSP at 1.5 times the cost of production remained pending till Modi government implemented it. MSP has got nothing to do with the farm laws. They do not affect MSP at all. Prime Minister Narendra Modi and I have explained and assured the farmers that MSP will continue,” he said.

Tomar said that the law provides that processors will have to dismantle the infrastructure set up on the farmer’s land after the agreement between them concludes.

“The law provides that if farmer and processor enter into an agreement and the type of crop is such that some infrastructure has to be set up on the farmer’s land, then the processor will dismantle his infrastructure from thereafter the agreement concludes,” he said.

“If the processor does not do it, then the owner of that infrastructure will be the farmer himself. This has been provided in the law,” he added.

He said the government, under the leadership of Prime Minister Narendra Modi, is committed to increasing the income of farmers.

“Before 2014 there was an immense shortage of urea during the sowing season and chief ministers of the states used to conduct dharnas in the national capital to demand their states’ quota of urea.”

The Agriculture Minister said that the government intends to liberate the farmers from shackles of mandi so that they could sell their produce at their own price.

“It is being projected that the land of farmers will be occupied by industrialists. Contract farming has been going on for long in Gujarat, Maharashtra, Haryana, Punjab, Karnataka but there has never been such an experience,” he added.

He said Acts provide that there will be agreement only be between processor and farmer. “There is no provision for any lease or agreement over farmers’ land.”

Union Minister for Railways and Commerce Piyush Goyal said the government is keen to find an amicable solution “in the interest of our annadatas”.

“There were some concerns that farmers will be forced to sell their produce in the private market. This is completely erroneous. There is absolutely no provision in the law which brings an element of compulsion on any farmer,” he said.

Farmer unions had on Wednesday rejected the government’s proposals for changes in three farm laws and said they will intensify their protest for the repeal of these laws.

The farmer unions had called a Bharat Bandh on Tuesday in support of their demand which was supported by several political parties.

The farmers are protesting against the Farmers’ Produce Trade and Commerce (Promotion and Facilitation) Act, 2020; the Farmers (Empowerment and Protection) Agreement on Price Assurance and Farm Services Act, 2020 and the Essential Commodities (Amendment) Act, 2020.