Home News Govt willing to continue talks with genuine farm unions; MSP will continue as it is: Narendra Singh Tomar

Govt willing to continue talks with genuine farm unions; MSP will continue as it is: Narendra Singh Tomar 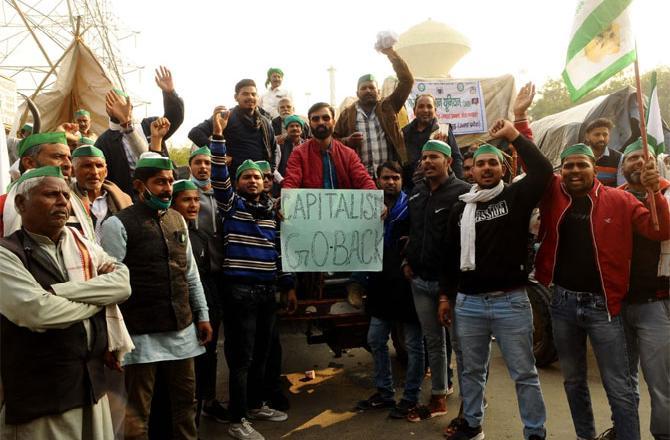 As a standoff continue between the government and groups of protesting farmers over three new farm laws, Agriculture Minister Narendra Singh Tomar on Tuesday said the Acts have been welcomed in various states across the country but the Centre is willing to continue its talks with “genuine farm unions” to find a solution with an open mind.

He also said that the Minimum Support Price (MSP), at which the government commits to procure the produce from farmers, is an administrative decision and it “will continue as it is”.

Tomar”s comments followed a meeting with members of the Bharatiya Kisan Union (Kisan) from Uttar Pradesh, who submitted a memorandum to the minister with suggestions regarding the Farm Acts and the MSP.

Bharatiya Kisan Union (Kisan) has also decided to end for now its protest, which it was holding at district levels in Uttar Pradesh. They have not been part of nearly 40 farmers” groups that have been protesting on various borders of the national capital and had attended the recent rounds of talks with the Centre without any breakthrough.

According to the ministry”s statement, Tomar thanked the BKU (Kisan) leaders for coming out in support of the Farm Acts and said these laws have been welcomed in various states across the country.

“He (Tomar) further added that the Government is willing to continue dialogue with genuine farm unions and is willing to find a solution with an open mind,” the statement said.

The BKU (Kisan) leaders suggested that farmers be given an option of going to civil courts in case of a dispute. They also suggested that the Panchayat head should be accorded the same importance as the head of the mandi to safeguard the rights of the farmers in small towns and villages.

In the case of the Essential Commodities Act, they suggested that it should prevent hoarding and black marketing.

The union leaders also suggested that electricity rates for irrigation should be reduced and electricity should be available for longer hours in Uttar Pradesh.

They also proposed that standards for crops should be decided at the procurement centres so that farmers do not face any problem in selling the produce.

After the meeting, BKU (Kisan) President Pawan Thakur told reporters, “The minister explained the laws in detail and we realised the laws are really good. We had some doubts, he cleared them all. …The minister said he will look into our demands.”

He also said the union stop its protest for the time being in Uttar Pradesh and Uttarakhand.

“If our demands are not met, we will protest again,” he added.

“The minister listened to our key amendments carefully. He said the government is discussing these issues already. We suggested six issues to make the laws more effective. We are happy with talks with the minister. We believe that the government is working positively,” said Acharya Ram Gopala Dixit, BKU (Kisan) Patron since 2009.

According to a memorandum earlier given by the union members, they pressed for a separate legislation to ensure guaranteed MSP for crops, saying the middleman buy crops at lower rate from farmers and sell it to government at MSP.

“We want a law on MSP so that crops outside mandis can not sold below that rate. Farmers incurred losses this kharif season as they were forced to sell below the MSP. If our demand is accepted we are ready to support the laws. We don”t know at what rate crops will be sold. Ideally, our crops should be sold above MSP but it is sold below that rate,” Thakur had said before his meeting with Tomar.

Tomar and some other ministers including Rajnath Singh have been meeting various farmer unions in the past few days who have extended support to the new laws.

However, several other farmer unions, particularly from Punjab and Haryana, are continuing to protest for more than two weeks against the three farm laws, saying the new legislation will lead to the dismantling of the MSP and mandi systems and leave them at the mercy of corporates.

Some ministers have also said that a few anti-social elements and Maoists are misusing the platform of farmers” protest to further their own agenda.

Speaking in Gujarat, Prime Minister Narendra Modi said separately that “a conspiracy is afoot to confuse farmers who have gathered near Delhi at present.”

The Centre announces MSP for more than 20 Kharif and Rabi crops. It mainly procures wheat and paddy to fulfil commitment under the National Food Security Act and to create buffer stock.

The government, under the food law, provides 5 kg of wheat or rice per person per month at Rs 2-3 per kg to over 80 crore people through ration shops. Of late, the Centre also procures pulses and oilseeds under different schemes such as the Price Stabilisation Fund.

In its proposal to farmers on Wednesday last week, the Centre had said it will give a written assurance that the MSP system will remain and also redress their other key concerns. The unions, however, are demanding complete rollback of the central laws and have threatened to intensify their agitation.