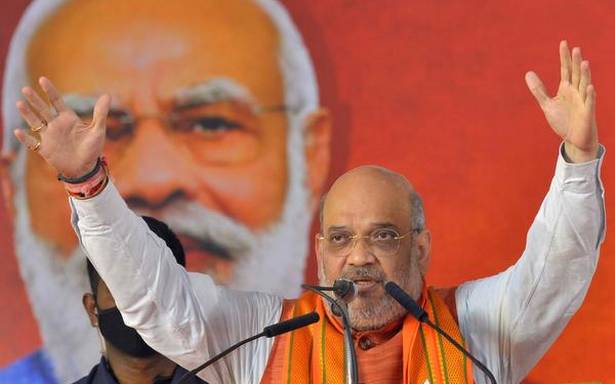 BJP leader and Union Home Minister Amit Shah on Thursday said the coming election on April 6 in the State is a fight between corruption and development, and appealed to the electorate to make the right choice.

Addressing a public meeting of the National Democratic Alliance (NDA) at Tirukovilur near here, he said the people should vote for the NDA if they wanted development or progress in the State.

On the other hand, corruption and dynasty rule were the hallmarks of the DMK-Congress combine, he said. Describing former Chief Minister MGR as a real ‘Makkal Thilagam’, Mr. Shah said the AIADMK founder, through his practical policies for the betterment of the poor and the underprivileged, had earned a reputation in every nook and corner of the country.

The policies that MGR cherished were successfully followed and implemented by his successor and AIADMK supremo Jayalalithaa and the present Chief Minister Edappadi K. Palaniswami, he said.

He dubbed the DMK as “anti-women” and called upon the women in the State to teach a fitting lesson to the party.

Mr. Shah said it was really amusing that DMK president M.K. Stalin had been making tall statements against corruption. Everyone knew that the DMK had distinguished itself as a corrupt party in the 2G scam.

The NDA was committed to developing Tamil Nadu and Prime Minister Narendra Modi was keen on the progress of the State while the DMK-Congress combine was encouraging corruption and development of its family members and was not bothered about the State, he added.

Mr. Shah said the DMK and the Congress were now making tall claims that they were the champions of jallikattu. This was really unacceptable and was an attempt to hoodwink the people.

“The Congress in its election manifesto in 2016 had promised to ban jallikattu. I thank Lord Murugan for not letting them come to power in the State in 2016 since they would have banned the traditional sport,” he said.

Stating that the BJP-AIADMK alliance was the only front that stood for development, Mr. Shah urged voters of the State to boycott the “corrupt” DMK-Congress alliance.

The Central and State governments, led by Prime Minister Modi and Chief Minister Palaniswami and the Deputy Chief Minister O. Panneerselvam, had spent time and energy to implement a number of welfare projects in the State. It was with the aim of taking the agenda of development to the next level that the Centre had allocated funds to the tune of ₹1,60,000 crore to the State, he said.

Mr. Shah said the BJP, which had spearheaded the agenda of development all over the country, would work further for the growth of the State.

He said Mr. Annamalai had a great track record as an honest police officer. Hence, the voters should reward him by electing him to the Assembly.