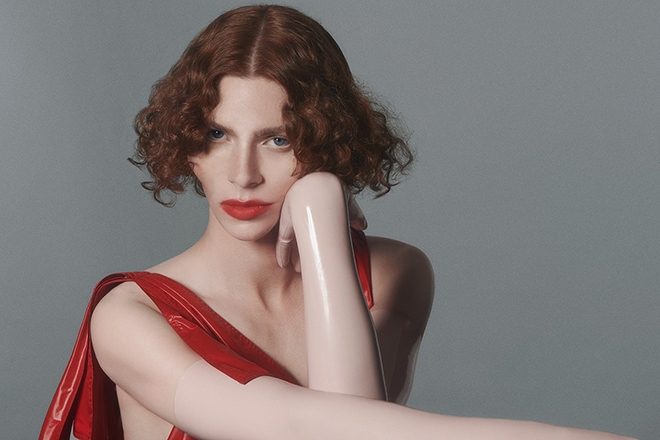 The electronic music community was shaken Saturday morning by the news that Sophie, a trailblazing experimental pop artist and producer who’d worked with Madonna, Nicki Minaj, Camila Cabello, Charli XCX, Vince Staples, Kim Petras, and many others, had died in a “terrible accident.”

According to statements by both the Sophie’s record label, Transgressive, and publicist, Ludovica Ludinatrice, Sophie was in Athens, Greece, and “climbed up to watch the full moon” and then “slipped and fell,” dying at 4 a.m. local time. A police spokesperson confirmed to the Associated Press that Sophie fell from the balcony of an apartment and that no foul play was suspected in the artist’s death. The visionary British musician — who made history as one of the three first openly transgender women to be nominated for a Grammy, and according to Pitchfork preferred not to use gendered or nonbinary pronouns — was 34 years old.

Sophie Xeon was born Sept. 17, 1986 in Glasgow, Scotland, and started in a band named Motherland before going solo in 2013, soon garnering buzz on SoundCloud and acclaim from critics for the singles “Nothing More to Say” and “Bipp”/“Elle”; the latter placed No. 17 on Pitchfork’s year-end list and No. 1 on XLR8’s list. Sophie’s major professional breakthrough came in 2015, with the placement of the track “Lemonade” in a McDonald’s commercial, the launch of a fruitful artistic partnership with Charli XCX, and high-profile production work on Madonna’s Rebel Heart single “Bitch I’m Madonna.” In November of that year, Sophie also released the official debut album Product.

Sophie spent the next couple years focusing on production, writing, and remix work for other artists, but returned in 2017 with the anthem “It’s Okay to Cry”; the video for that track was the first to feature the previously reclusive and largely anonymous artist’s face, and served as Sophie’s well-received coming-out statement as a member of the trans community. Sophie’s full-length sophomore effort, Oil of Every Pearl’s Un-Insides, later earned a nomination for Best Dance/Electronic Album at the 61st Annual Grammy Awards.

Sophie was heralded for a signature surrealist, warp-speed sound that bridged the mainstream and the underground, incorporating elements of Japanese and Korean pop, Eurodisco, U.K. garage, Y2K pop, and ‘90s house and hip-hop. Sophie often eschewed samples, instead using Elektron Monomachine and Ableton technology to build instrumentals from waveforms that mimicked the unorthodox found sounds of metal, water, and plastic. “Sophie was a pioneer of a new sound, one of the most influential artists in the last decade. Not only for ingenious production and creativity but also for the message and visibility that was achieved. An icon of liberation,” the artist’s publicist’s statement read.

Upon hearing the shocking news of Sophie’s death, many famous colleagues and admirers took to social media to pay tribute.

Heartbreaking news. The world has lost an angel. A true visionary and icon of our generation. Your light will continue to inspire so many for generations to come. Thinking of Sophie’s family and friends at this hard time ❤️ pic.twitter.com/7qr4aI0DDi

Sophie was a stellar producer, a visionary, a reference. She rebelled against the narrow, normative society by being an absolute triumph, both as an artist and as a woman. I can’t believe she is gone. We need to honor and respect her memory and legacy. Cherish the pioneers. pic.twitter.com/3kyRl1KabY

it is rare that we get to live at the same time as an artist so truly singular. if it’s the actual sound of her work which is the definition of new, or the feeling behind it … it was legendary during her life and will continue to be after.

Thinking about the last time I saw Sophie in France. I remember her getting off stage as I was going on. She was wearing patent leather. I never remember what anyone was wearing but I remember that and how beautiful she was in every way.

I’m heartbroken.
Thank you Sophie Rest In Power!
You will always be remembered as a true game changer, powerful presence and an incredibly original producer ! Your music and production brought me so much joy! pic.twitter.com/VZ1v9UNSb5

RIP SOPHIE. her work never failed to blow my mind and she sounded like a wonderful person. truly tragic news.

My heart breaks to hear about the tragic loss of our dearly loved SOPHIE. She was a true visionary and inspiration, a phenomenal producer, and pioneer of pop experimentation. May she rest easy with the angels <3

Our hearts go out to the family, friends & fans of #SOPHIE. A true innovator, Rest In Peace.

wow. i’m in shock. my heart is broken for the loss our earth has just suffered. RIP SOPHIE. she had so much more to give.

cherish every moment of your life and the lives of those you love. existence is so fragile.

What a rare & beautiful gem we lost today. Thank you for your stunning, badass and astronomically one-of-a-kind work SOPHIE. Rip to one of the greatest artists & producers of our time.

I’ll link some of her stellar work in a thread below if you haven’t had the pleasure 💕 pic.twitter.com/o9eshj9DdF

Back to Top
Close Add post
X
Sarah Jessica Parker says COVID-19 will ‘obviously’ be part of the ‘Sex and the Ci…Entertainment(L to R): Sarah Jessica Parker, Kristen Davis, Kim Cattrall and Cynthia Nixon starred in the beloved franchise "Sex And The City." (Photo: Rune Helles…