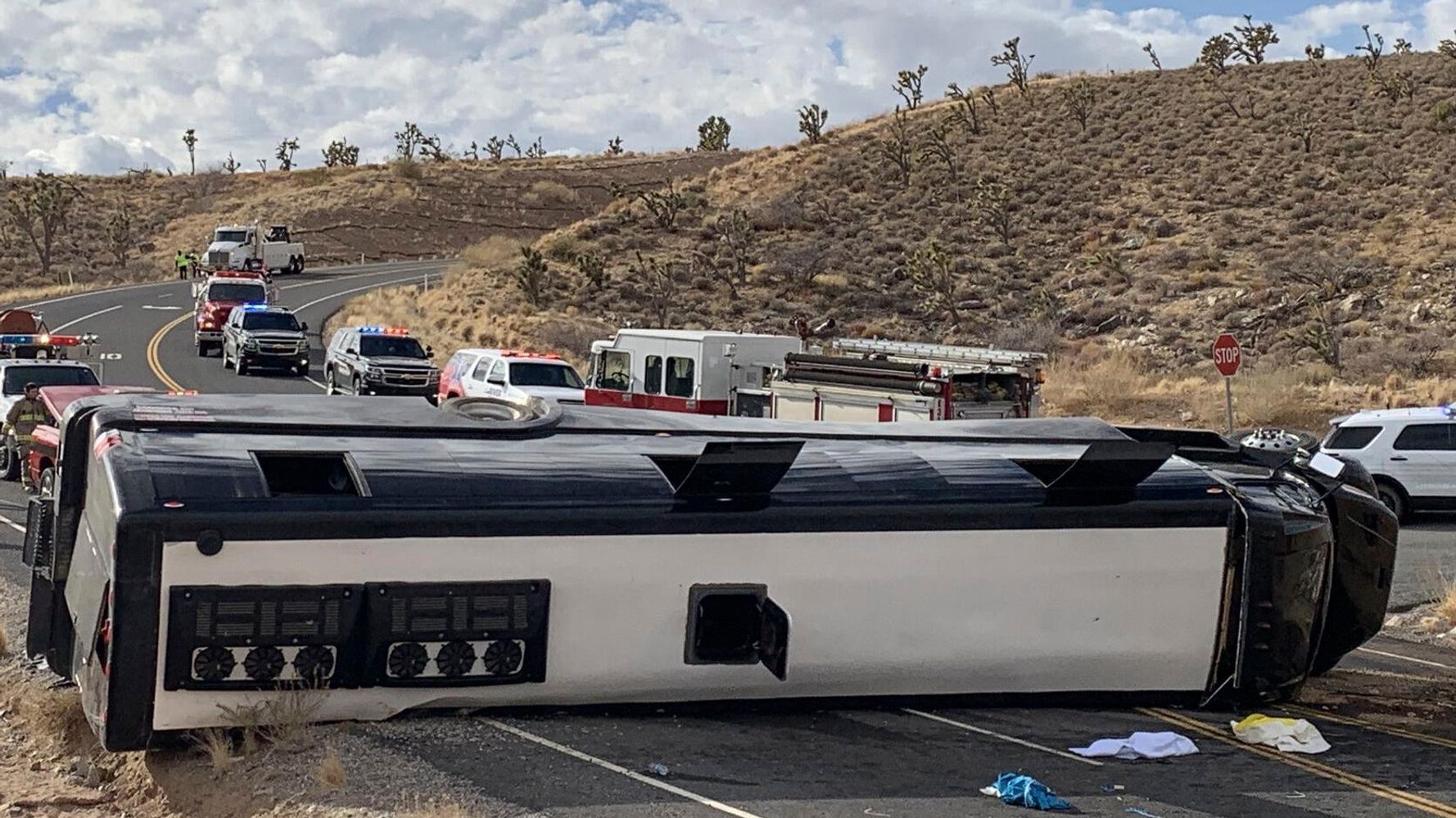 PHOENIX (AP) — A Las Vegas-based tour bus heading to the Grand Canyon rolled over in northwestern Arizona on Friday, killing one person and critically injuring two others, authorities said.

A spokeswoman for the Mohave County Sheriff’s Office said the cause of the Friday afternoon wreck was not yet known, but a fire official who responded said speed appeared to be a factor. No other vehicles were involved.

“It was a heavily damaged bus. He slid down the road quite a ways, so there was a lot of wreckage,” said Lake Mohave Ranchos Fire District Chief Tim Bonney. “Just to put it in perspective, on a scale of zero to 10, an eight.”

None of the passengers was ejected from the vehicle but they were all in shock, Bonney said.

“A lot of them were saying the bus driver was driving at a high rate of speed,” he said.

A photo from the sheriff’s office showed the bus on its side on a road that curves through Joshua trees with no snow or rain in the remote area.

There were 48 people on the bus, including the driver, authorities said. After the crash, 44 people were sent to Kingman Regional Medical Center, including two flown by medical helicopter, spokeswoman Teri Williams said. All the others were treated for minor injuries, she said.

The bus was heading to Grand Canyon West, about 2 1/2 hours from Las Vegas and outside the boundaries of Grand Canyon National Park. The tourist destination sits on the Hualapai reservation and is best known for the Skywalk, a glass bridge that juts out 70 feet (21 meters) from the canyon walls and gives visitors a view of the Colorado River 4,000 feet (1,219 meters) below.

RELATED:  Payrolls barely grow to start 2021 even as the unemployment rate fell to 6.3%

Before the pandemic, about 1 million people a year visited Grand Canyon West, mostly through tours booked out of Las Vegas. The Hualapai reservation includes 108 miles (174 kilometers) of the Grand Canyon’s western rim.

In addition to the Skywalk, the tribe has helicopter tours on its land, horseback rides, a historic guano mine and a one-day whitewater rafting trip on the Colorado River. Rafters who are on trips through the Grand Canyon also can get on and off the river on the reservation.

In a statement issued late Friday, the Hualapai Tribe and its businesses said they were saddened by the rollover and that safety is the highest priority for guests, employees and vendors.

“As a people, our hearts go out to those so deeply affected,” the statement read. “We wish speedy recoveries to those requiring medical attention.”

National Transportation Safety Board spokesman Keith Holloway said he didn’t immediately have more details about the crash. The agency doesn’t send investigators to all bus crashes.

Other, deadly crashes have happened before in the area.

Four Chinese nationals died in 2016 when their van collided with a Dallas Cowboys staff bus headed to a preseason promotional stop in Las Vegas.

In 2009, a tour bus carrying Chinese nationals overturned on U.S. 93 near the Hoover Dam, killing several people and injuring others. The group was returning from a Grand Canyon trip.

Federal investigators cited driver inattention as the probable cause of that crash. The bus driver was attempting to fix a problem with airflow through his door before the crash and became distracted, then veered off the road and overcorrected before crossing a median and overturning. Most of the passengers were ejected.

Bryan Sykes, Who Saw the Ancient Past in Genes, Dies at 73

Joe Biden Calls For Unity In Inauguration Speech: ‘We Must End This...

‘We not only dream, we do’: U.S. Vice President Kamala Harris delivers...