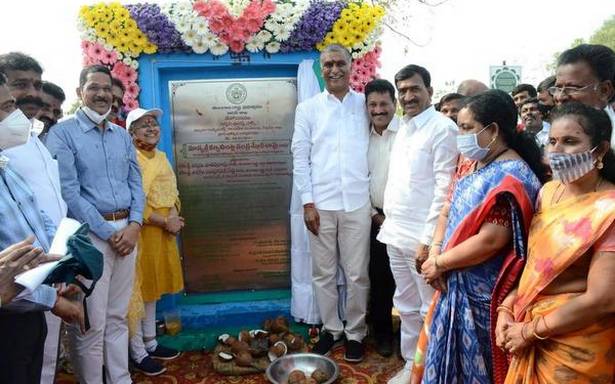 Finance Minister T. Harish Rao said the green cover in the State has increased by 3.5% after the formation of Telangana.

Addressing a gathering after inaugurating Tejovanam Urban Forest Park on the outskirts of the district headquarters on Thursday, Mr. Rao said the increase of green cover would offer fresh air and environment, in addition to reducing stress. He suggested planting and nurturing saplings should be part of one’s life.

“Telangana is the only State that has been sparing about 10% of budget from the local bodies for greenery. Increase of greenery was made possible with proper plan of action and implementing it. This was established on about 500 acres at a cost of ₹4.5 crore. As many as 109 urban parks are proposed in the State, and already 35 parks, including the latest one in Siddipet, were inaugurated,” said Mr. Rao adding that about 100 acres at this place was specially allotted for oxygen park. Facilities for cycling track, walking, yoga and meditation were also established in the park.

Stating that Chief Minister K. Chandrasekhar Rao has been focusing on increasing the green cover from the very beginning, the Finance Minister said that this is as good as offering an asset to the future generations. He called upon people to make sapling plantation and protecting them a part of their social responsibility.

Meanwhile, Mr. Rao said that the damaged pipelines due to railway work at Gajwel will be repaired with Mission Bhagiratha funds. He said that these roads were damaged due to Road Over Bridge works. The Minister held a review meeting with the South Central Railway Chief Engineer Sudharma, Mission Bhagiratha Superintendent Engineer Srinivasa Chary and Gajwel Area Development Authority (GADA) special officer A. Muthyam Reddy.

Back to Top
Close Add post
X
Belgian Malinois, Dog Breed that Helped Kill Osama Bin Laden, to be Part of Indian Army: Report…IndiaFile photo of Indian Army soldiers marching beside their dogs during the Army Day parade in New Delhi. (For representation/REUTERS)The canines will be…

Green cover in Telangana up by 3.5%, says Harish Rao