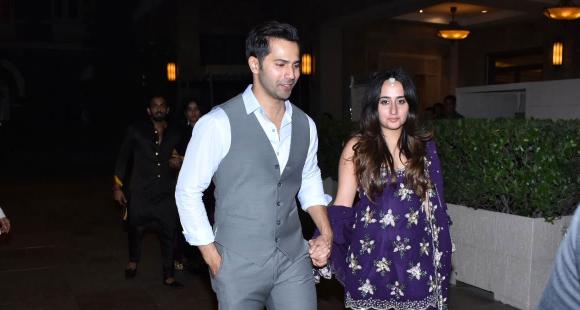 Varun Dhawan married ladylove Natasha Dalal in a private ceremony in Alibaug and according to media reports, the groom made a smashing entry on his big day.

After creating a lot of speculations about their wedding, one of Bollywood’s much loved couple Varun Dhawan and Natasha Dalal are married now. Yes! The couple has tied the knot in a traditional ceremony in Alibaug’s five star hotel The Mansion House. It has been an intimate ceremony with only limited guests in attendance. While we all have been waiting for the newlyweds to make their first appearance as man and wife, the dreamy decoration of the wedding venue has been leaving everyone mesmerised.

Amid this, a recent update stated that Varun made a stunning entry as a groom on his big day. According to media reports, the Student of the Year actor had entered on Salman Khan’s popular song Tenu Leke from the movie Salaam-E-Ishq. Isn’t that a perfect song for the groom’s entry. On the other hand, several other Bollywood songs were also heard at the wedding venue which including Saddi Gali from Ayushmann Khurrana starrer Nautanki Saala and Akshay Kumar’s Bhootni Ke. Needless to say, the baraatis will be setting the dance floor on fire with these peppy tracks.

Take a look at a video from Varun Dhawan and Natasha Dalal’s wedding venue:

Meanwhile, several special measures have been taken at the wedding venue be it in terms of COVID 19 forms and maintaining a strict no phone policy. On the other hand, according to media reports, newlyweds Varun and Natasha will be hosting a grand wedding reception in Mumbai’s five-star hotel on February 2 which will be attended by the couple’s friends and celebs from the film fraternity.