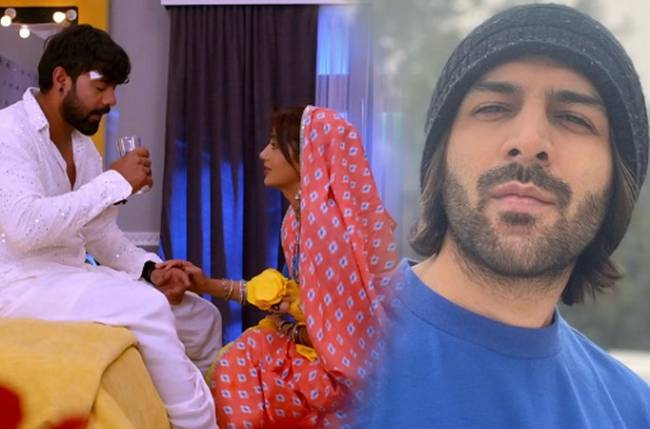 MUMBAI: Zee TV’s popular fiction show, Kumkum Bhagya has been an audience favourite with its intriguing plot and the authentic portrayal of relatable characters like Abhi (Shabbir Ahluwalia), Pragya (Sriti Jha), Rhea (Pooja Banerjee), Ranbir (Krishna Kaul) and Prachi (Mugdha Chapekar). In fact, Pragya’s heartwarming struggle in protecting Abhi, who has lost all his memory and become child-like, has kept the viewers on the edge of their seats. While Pragya donning a househelp’s avatar to get into the Mehra house and help treat her husband may have won the audience’s hearts, Ridhi Dogra’s appearance as Astha (character from ‘The Married Woman’) in the show was also immensely loved by the audience. With Kumkum Bhagya being showered by love from countless fans across the globe, it looks like Zee TV’s primetime drama has another fan as well and this one’s an A-list Bollywood actor.

Yes, we’re talking about the one and only, Kartik Aaryan. The actor, who recently tested positive for COVID-19, has been in quarantine since a couple of days and he made a rather interesting post recently. While sharing a picture where he is doing a handstand, he wrote, “Covid ke baad se sab ulta dikh raha hai (After COVID, I am seeing everything inverted).” TV czarina and producer of Kumkum Bhagya, Ekta Kapoor, who is also Kartik’s friend, wished him a speedy recovery on the post. But the conversation didn’t stop there! Kartik made a surprising revelation as a reply to Ekta’s comment. He mentioned how Kumkum Bhagya has come to his rescue during the quarantine, as Kartik replied, “Ghar baithe Kumkum Bhagya dekh raha hu and getting better (I am watching Kumkum Bhagya at home and getting better).”

This reply has got fans of Kartik as well as the show’s viewers very excited, as they dropped comments after comments on this reply. Clearly, Kartik is having a great time watching how Pragya goes all out to help Abhi get better by taking up a househelp’s avatar. But will Pragya be successful? Or will the Mehras find out about Gayatri’s hidden identity?

To know all this and more, tune in to Kumkum Bhagya, every Monday to Friday at 9 pm, only on Zee TV