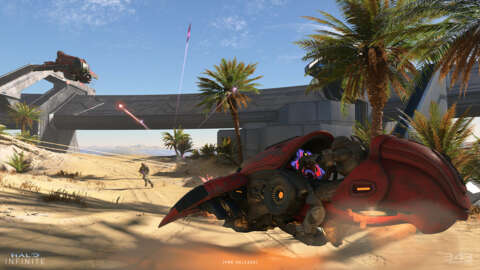 It appears Halo Infinite will bring back the Elimination mode first seen in the original Halo: Combat Evolved and then brought back for Halo 2. One of Halo Infinite’s achievements is called “MEDIC!,” and it’s rewarded to those who successfully revive three allies in a matchmade Elimination game.

This is no surprise, though, as Monday’s Halo Infinite Season 1 trailer showed a Spartan soldier reviving a downed ally. The voiceover then says, “On your feet, Spartan.” You can see this at about 50 seconds into the Season 1 trailer. The big change from Elimination mode in Halo and Halo 2 is that Halo Infinite will let players revive allies, as the Achievement text states and the video shows (via GamesRadar).

Being a live-service game, Halo Infinite will receive ongoing updates over time that add new content, and this includes modes. Community director Brian Jarrard said on Twitter recently that, “More modes are definitely coming.” The first of this will come during Halo Infinite’s Fracture: Tenrai event, which begins next week. The name of the mode, however, has not been announced.

It’s been a big week for Xbox, as November 15 was the 20th anniversary of Xbox and Halo. Microsoft celebrated with a special video broadcast that included 70+ more games for backwards compatibility, a new Halo TV show trailer, and the surprise-launch of Halo Infinite’s multiplayer beta. Days later, Microsoft expanded cloud streaming to consoles for more users.

GameSpot may get a commission from retail offers.