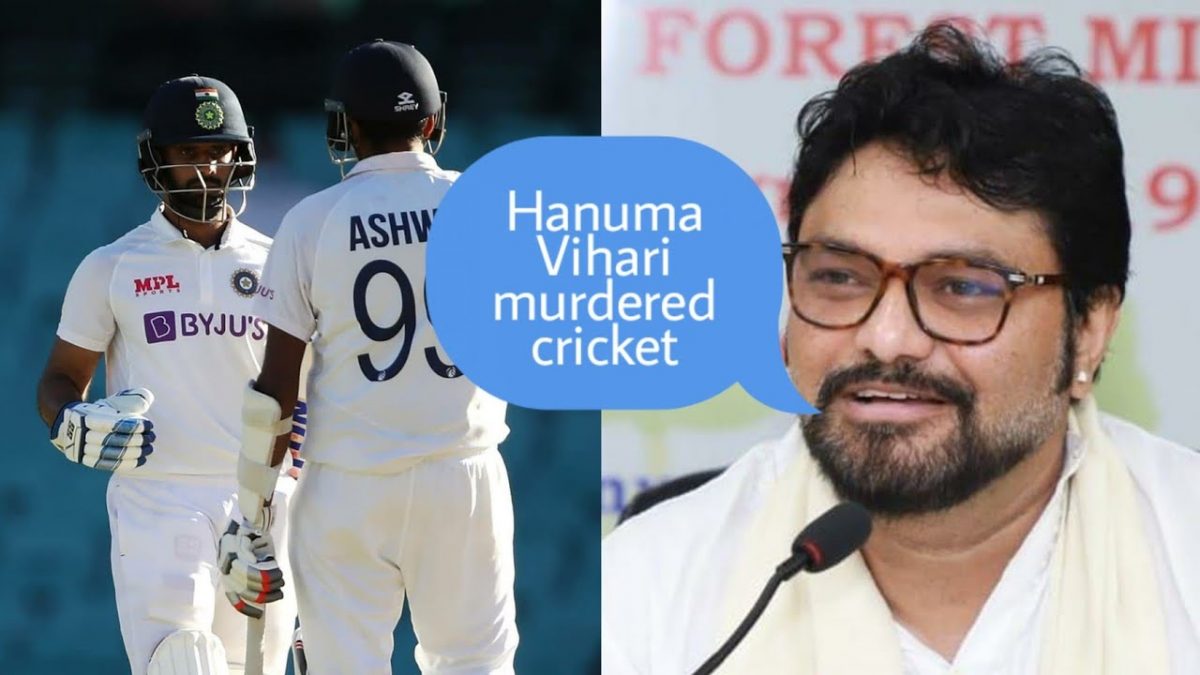 Star from the Sydney Test, Hanuma Vihari recently shut down BJP MP Babul Supriyo who criticised his knock stating that his sluggish innings took India away from the victory. Incidentally, the visitors secured a draw in the last outing from an odd position to keep the Border-Gavaskar Trophy tied at 1-1.

Meanwhile, Hanuma Vihari came in the middle at the cost of Rishabh Pant, who scored a blistering 97 runs before returning to the hut. His innings gave India some hope of winning the Test match but it soon faded away after Josh Hazlewood removed Cheteshwar Pujara with a ripper of a delivery.

With Ravindra Jadeja all but out with a dislocated finger, India were staring at a defeat with two sessions to go. Things turned worse after Vihari suffered a hamstring injury and was not being able to run and Ravichandran Ashwin copped up a few bruises in his ribs. At one point, it looked like it was only time that India lose the match but Vihari and Ashwin defied all the odds to bat two sessions and 258 balls before both sides shook hands for a draw.

RELATED:  Microsoft shuts down the Cortana app on Android and iOS

While their fights earned plaudits from all quarters, BJP MP Babul Supriyo seemed not pleased with Hanuma Vihari’s intent. He called him out on Twitter saying that he not killed India’s chances of winning the Test match but also murdered the game.

Playing 109 balls to score 7 !That is atrocious to say the least•Hanuma Bihari has not only killed any Chance for India to achieve a historic win but has also murdered Cricket.. not keeping win an option, even if remotely, is criminal. PS: I know that I know nothing abt cricket,” Bablu Supriyo tweeted.

Playing 109 balls to score 7 !That is atrocious to say the least•Hanuma Bihari has not only killed any Chance for India to achieve a historic win but has also murdered Cricket.. not keeping win an option, even if remotely, is criminal.
PS: I know that I know nothing abt cricket

RELATED:  Australia vs India 2020-21: Really Concerned About Steve Smith: Former Australian Pacers Warns CA To Look After The Mental Health Of The Batsman After Sydney Controversy

Soon after he tweeted, it went viral with a  lot of flak coming Babul Supriyo’s way. However, the ultimate came from the cricketer himself as Hanuma Vihari in the comment section wrote the correct spelling of him which was misspelled by the BJP MP. With a two-word reply, Vihari shut down the singer-turned-politician which was perceived as the tweet of 2021 by his fans.

Franchise Wise One Player Who Is Likely To Be Released Ahead Of...

Cheteshwar Pujara Bats With A Higher Backlift At CSK Nets Preparing For...

IPL 2021: 3 Teams Who Can Bid For All-Rounder Chris Morris