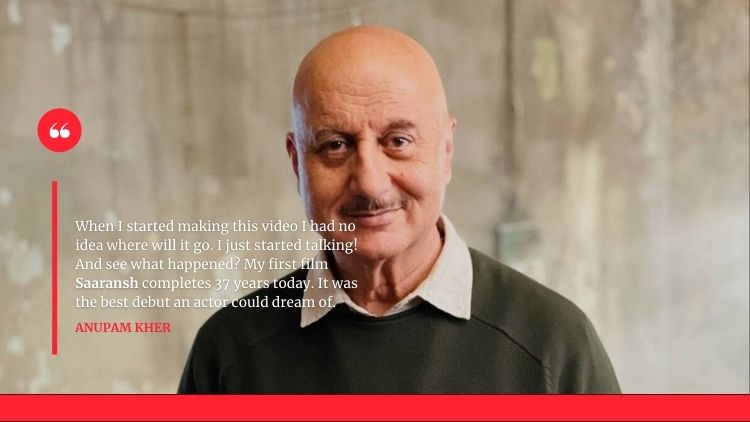 Yesterday, actor Anupam Kher shared a video with his fans where he showed the opening titles of his debut film ‘Saaransh’.The actor told everyone that seeing his name in the opening title of the film still gets him choked. Today marks 37 years of the release of this film and with this it is Anupam Kher’s 37th Birthday in Cinema.

On 25th May 1984, Indian Cinema got its one of the most talented and versatile actor. As he completes 37 years in the industry today, he shared a video with his fans and wrote a heartfelt emotional note, “When I started making this video I had no idea where will it go. I just started talking! And see what happened? My first film #Saaransh completes 37 years today. It was the best debut an actor could dream of. I was 28 playing a 65 year old teacher named #BVPradhan. Certain scenes are still part of my soul. I had no idea what will my fate afterthis film!! I just wanted to give my everything to it. If I am still around it is because #Saaransh was my first film. Thank you #BhattSaab for your faith and courage. Thank you @rajshrifilms for your belief. And most of all thank you my dearest audiences for your trust. Love and prayers always!

In the video, he thanked everyone for their support in these 37 years . He also enacted one of the scene from the film ‘Saaransh’ which is closest to his heart. As per him, the  scene in the film where he goes to collect the ashes of his son from the custom office gave him the acceptance amongst the audience.

We congratulate the actor for this great milestone! May he continue to entertain us!