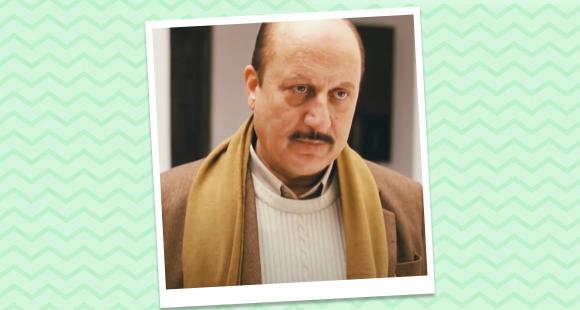 Today, on the occasion of Anupam Kher’s 66th birthday we bring to you his five terrific on-screen performances that have left a lasting impression. Check it out.

Anupam Kher, the name that truly deserves no introduction. His impressive body of work is enough to speak volumes about his versatility as an actor. In a career spanning over three decades, the senior actor has done over 500 films. Be it be a comic role, a serious role or playing a loving father or a villain, if any actor in Bollywood who can nail any given character in a film, then it is none other than Anupam. Needless to say, give him any genre and the actor hits the ball straight out of the park.

Born on 7th March 1955 in Shimla, Himachal Pradesh, Anupam made his acting debut with Aagman in 1982. But it was Mahesh Bhatt”s Saaraansh in 1984 which rose him to prominence and changed the game for him. The Ram Lakhan actor essayed the role of a 65-year-old who has lost his only son in Mahesh Bhatt directorial, Saransh. The stellar performance won him many laurels. With many memorable and blockbuster films to his credit, Anupam is the recipient of two National Film Awards and eight Filmfare Awards. The powerhouse actor has proven his mettle as one of the most established and celebrated actors of India. His stint in Hollywood flicks such as ‘Silver Linings Playbook’, ‘Lust, Caution’, ‘Bend It Like Beckham’ has also gained him global recognition.

He holds the record for winning the Filmfare Award for Best Comedian five times for Ram Lakhan (1989), Lamhe (1991), Khel (1992), Darr (1993) and Dilwale Dulhaniya Le Jayenge (1995). He won the National Film Award for his performances in Daddy (1989) and Maine Gandhi Ko Nahin Mara (2005).  Over the years, the actor pulled off serious, comic and negative roles in films and became a force to reckoned with. Even in his 60’s the talented star is unstoppable in terms of his pathbreaking performances and is continuing to win hearts with his acting prowess. To note, the Government of India honoured the actor with the Padma Shri in 2004 and the Padma Bhushan in 2016 for his contribution in the field of cinema and arts.

Today, Anupam Kher is celebrating his 66th birthday today and to celebrate it we bring you his five best performances which have left a lasting impression. Take a look.

Anupam Kher portrayed a 65-year-old retired middle-class teacher who loses his son. The actor was 28-years-old when he played the role of a retired stubborn old man. Though, the movie was a moderate box office success, Kher’s performance earned him widespread praise. He won a number of awards for his portrayal of the old father, including the Filmfare Award for Best Actor. Saaransh is one till date the best one of Anupam Kher’s career.

Directed by Jahnu Barua, the 2005 release saw Kher in the role of a Hindi professor Uttam Chaudhary who falls victim to dementia. His condition worsens because an old incident that happened during his childhood makes him believe that he is responsible for the assassination of Mahatma Gandhi. The actor’s performance received critical acclaim and won a Special Jury Award at the National Film Awards. He also received awards at several international film festivals.

Remember Dr. Dang in Subhash Ghai’s Karma. Anupam Kher made his presence felt with his sheer acting prowess and proved that he can pull off even a negative role quite well. The film saw the actor playing antagonist who successfully runs from prison and kills the entire family of Rana Vishwa Pratap Singh played by Dilip Kumar, except his wife. Thereupon, Singh decides to embark on a mission to nab Dang and his terrorist and it achieves his mission with help of Baiju Thakur (Jackie Shroff), Johnny/Gyaneshwar (Anil Kapoor), and a former terrorist Khairuddin (Naseeruddin Shah). The film was a huge success at the box office.

Neeraj Pandey’s directorial Special 26 was based on the 1987 Opera House heist where a group posing as CBI officers executed an Income Tax raid on a jeweller in Mumbai. It had an ensemble cast of Akshay Kumar, Kajal Aggarwal, Manoj Bajpayee, Jimmy Sheirgill, Anupam Kher and Divya Dutta in lead roles. Kher was seen in a powerful role laden with various emotions, authority and vulnerability. His performance as the fake CBI officer PK Sharma was noteworthy.

Mahesh Bhatt’s semi-autobiographical film ‘Daddy’ saw Anupam Kher in the role of an alcoholic father who struggles to get over his addiction. The television film that was made for Doordarshan marked the acting debut of Pooja Bhatt. In an earlier interview with the Hindustan Times, Anupam had said that not all films can teach us about life but Mahesh Bhatt’s Daddy is one of his favourites. The emotional journey that he went through for the character of Anand was tremendous. He also mentioned that the film made him learn that no matter what, there is always a reason to get up and fight back.

Also Read: Women’s Day 2021: English Vinglish to Chhapaak; Movies that took ‘Of the women, by the women’ to next level