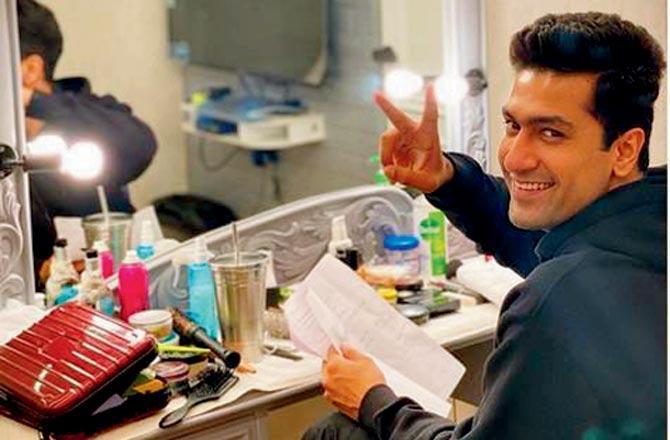 On Wednesday, Vicky Kaushal resumed work after months due to the pandemic. He took to Instagram to share that he has started shooting for his new project. Posting pictures from the green room with what appears to be a script in hand, Vicky appeared ecstatic to be back on the set.

Without disclosing details about the shoot, “Shubh aarambh,” he wrote in Instagram post. In the first picture, the actor is seen holding a paper and sitting in front of a dressing table. The second image has a side profile of Vicky Kaushal as he smiles away from the camera.

Kaushal is slated to be part of a Yash Raj comic caper with Manushi Chhillar. Has he begun work on it?

Also Read: Ashwatthama will roll by April, says the director of Vicky Kaushal-starrer

Fans were left gushing on seeing his latest pictures. A user wrote: “You are so so delicious.” Another said: “That smile just made my day.” A netizen tagged the actor as “super cute”. “Hayyyyyyy me mar jawann (I will die)”, said a fan.

The National Award-winning star was last seen in Bhanu Pratap Singh’s Bhoot Part One: The Haunted Ship. He will next be seen in Shoojit Sircar’s Sardar Udham Singh, where he plays the titular revolutionary.