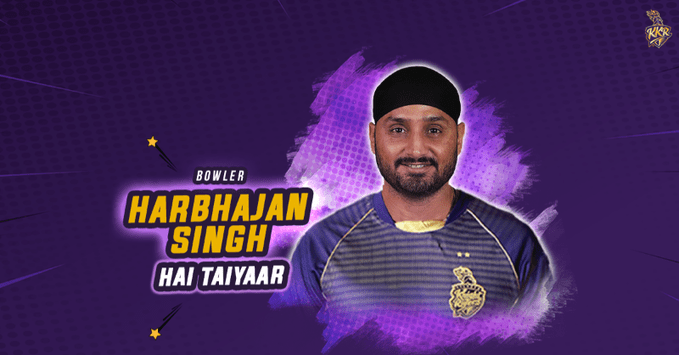 Veteran Indian spinner Harbhajan Singh has joined the Kolkata Knight Riders ahead of IPL 2021. The off-spinner joined the team on March 27 and is currently at the team hotel. Bhajji is also currently undergoing his 7-day quarantine period before resuming practice with the side. The off-spinner was snapped up by the Shahrukh Khan-owned franchise in the second round of the IPL 2021 player auction. He went unsold in the first after which KKR bagged him for 2 crores.

Meanwhile, Harbhajan Singh in an interaction with PTI, opened up on his plans about yet another IPL season, this time for Kolkata Knight Riders. Bhajji is the only off-spinner in the KKR ranks. KKR will be the third IPL franchise for the veteran spinner who has previously played for Mumbai Indians and Chennai Super Kings.

Harbhajan is not bothered about the questions of his doubters and the veteran bowler is only keen on recording another successful season in the cash-rich league. He is only interested in helping the Eoin Morgan led-side to win their third IPL title.

Harbhajan will join the likes of Varun Chakravarty, Sunil Narine and Shakib Al Hasan as it forms a spin quartet for KKR. Kolkata has been a side that has been heavily reliant in the past on spin. They will be playing in Chennai and Delhi where the [itches have been suiting spin.

Harbhajan Singh further said that he has nothing to prove to anyone and he is just looking forward to have a good season with KKR and enjoy his time with the franchise.

I Have Nothing To Prove To Anyone: Harbhajan Singh

“I have got nothing to prove to anyone. My intention is to play well, enjoy my stint out there in the middle and playing cricket still gives me that satisfaction. I have set a standard for myself and if I don’t meet that, I don’t need anyone else but I will blame myself. I need to ask myself, did I put in the optimum effort that was required,” Harbhajan added.

Harbhajan Singh has bagged 150 wickets in 160 IPL matches. Harbhajan was roped in by the Shah Rukh Khan co-owned franchise at his base price of INR 2 crores.