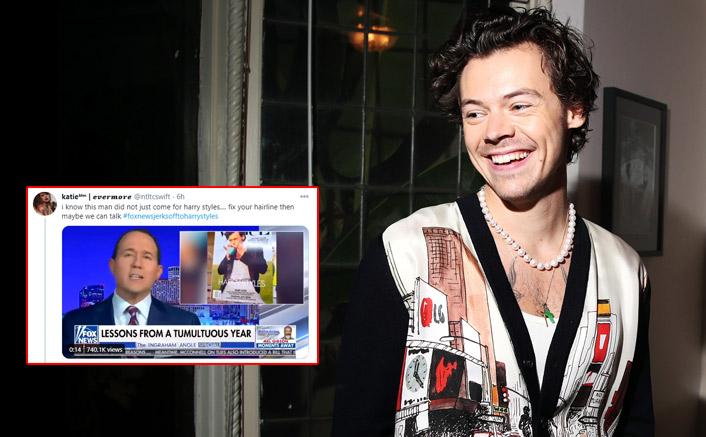 Harry Styles have been trending on social media ever since his Vogue cover shoot went viral on the internet. The Golden singer wore a powder blue suit and captioned it ‘Bring back manly men’ and later Fox News anchor slammed him for the same and now netizens are trending #FoxNewsJerksOffHarryStyles in anger.

It so happened that a Fox News anchor called out Harry for wearing a dress for the cover shoot and hence the social media ruckus began.

Harry Styles fans have been trending #FoxNewsJerksOffHarryStyles and social media are filled with reactions in anger on the news channel. One user tweeted, “i know this man did not just come for harry styles…. fix your hairline then maybe we can talk #foxnewsjerksofftoharrystyles”.

Another user tweeted, “me @ fox news right now because nobody insults h and gets away with it #foxnewsjerksofftoharrystyles”.

Take a look at some of the Twitter reactions here:

That’s indeed ridiculous to troll someone based on what they’re wearing.

Meanwhile, One Direction’s reunion has been the talk of the town for a while now.

During a radio show, Liam Payne was asked if he would ever try and get the other One Direction boys on a Zoom chat for a Christmas get-together. “I’d love that, honestly, I would. I was recently on the phone with Louis for a good hour and I think we just need a proper catch-up,” he replied.

Liam Payne, “It was nice to catch-up for the 10-year anniversary, I’m hoping we’ve got a lot more to come from us – I sound like I’m talking about a football club, ‘I played really well in defence’ – I think we’ve got a lot more to come and it’s tough out there singing these songs on your own. Some of them area really difficult, there was a reason there was four or five people out there to overtake sometimes. I definitely miss them, and I hope we catch up.”

What are your thoughts on Fox News trolling Harry Styles for his Vogue cover? Tell us in the comments below.