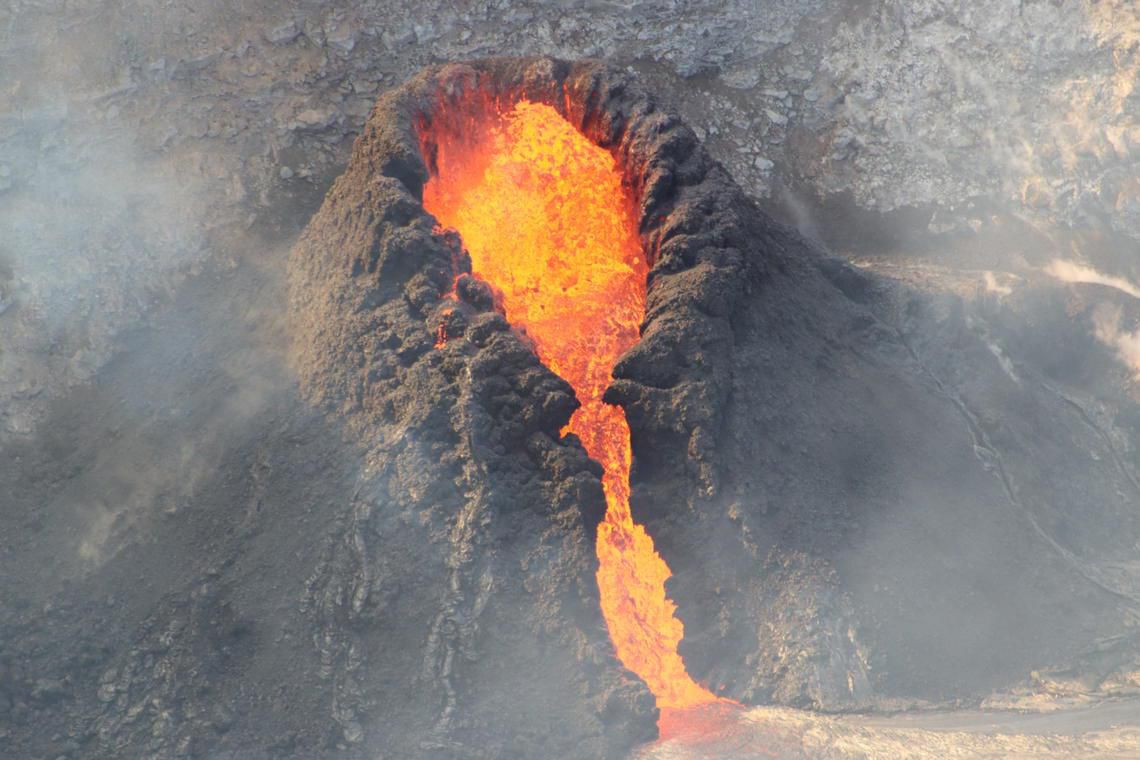 More than a month after it unexpectedly woke up from its slumber, Kīlauea, the volcanic crown jewel of the Hawaiian archipelago, is continuing to light up the night with its glorious displays of fire fountaining and cascades of incandescent lava. Since December 20th, 2020, the Island of Hawai‘i’s restless shield volcano has been erupting molten rock out of its bowl-shaped summit, from the Halema‘uma‘u pit within, like lava’s going out of fashion. It’s seriously impressive to see and, thanks to its confinement in that rocky coliseum, the pyrotechnics remain far from the people living on its sizeable slopes — making the eruption a delight for volcanologists rather than a cause for (major) concern.

Not known for sitting on their hands, scientists at the U.S. Geological Survey’s Hawaiian Volcano Observatory have been out in the field, pointing scientific instruments at the eruption and grabbing bits of freshly cooled lava. And in doing so, they’ve already answered a key question about the new eruption: where’s all that lava coming from?

I know, it sounds like a silly question. Of course the lava’s coming out of the fissure in the side of the Halema‘uma‘u pit, right? Yes, you’ve nailed it, but that’s not what I mean here. Working out what’s making that magma matters. Volcanoes don’t just have an infinite supply of magma, so finding out what’s making new magma and driving an eruption helps us better understand why it erupts in the ways it does.

It was long presumed that, when a volcano like Kīlauea stops erupting, it’s because it ran out of fuel. But the volcano’s 2018 eruption sequence threw a wrench into the works. The paroxysm, which began in late-April/early-May, was producing an enormous amount of lava, volcanic gases and seismic activity when, on August 4th of that year, everything abruptly shut down. Why would it have done so right at the peak of its lava-making production?

Using the amount of lava clocked coming out of its eastern flanks, and comparing that value with the changing topography of the volcano, scientists worked out how the shape – and, roughly, the volume – of the magma cache responsible altered over time. They found that, at most, just a third of the magma was erupted, with the rest still stored up ready to go. It’s not yet understood why the eruption suddenly ceased on August 4th, but it became clear that volcanoes don’t have to exhaust their fuel sources to stop setting the world on fire.

Saying that, the eruption in 2018 was so prolific that there was expected to be a delay of several years before Kīlauea began erupting again in earnest. That it did so just two-and-a-half years after what was essentially the epic finale of a 35-year-long eruption came as a surprise to volcanologists. Immediately after the 2018 eruption gave up the ghost, seismic grumblings were heard emanating from the summit, indicating that the magma reservoir was already filling up. A future eruption was inevitable. But the volcano’s December 2020 reawakening seemed to suggest it was in a right hurry, making new magma at an extraordinarily fast pace and introducing it to the surface world before the 2018 scientific post-mortem had been completed.

Volcanologists have been grabbing bits of newly forged volcanic debris being flung out of the fissure filling up the new Halema‘uma‘u lava lake. They aren’t just doing this for fun (although it definitely is); they’re taking the rocks back to their laboratories and peering at the chemical compositions of its menagerie of minerals.

Different types of lava or magma has distinct chemical fingerprints. They already have those of the 2018 eruption’s lava on record, so by looking at this contemporary molten rock they can determine if 2021’s lava is new and delicious soup or if it’s old, stale borscht being mischievously repackaged as something novel.

As reported on a recent entry on the Survey’s Volcano Watch blog, it looks like it’s the latter. The lava’s cooled matter features chemical concoctions typical of older and colder magma, while lacking anything suggesting hot new magma has dropped. In other words, it looks like this recent eruption is the consequence of Kīlauea coughing up some pyro-phlegm stuck in its lithic oesophagus — for the time being.

Volcanic eruptions are frequently unpredictable. This eruption could come to an end any day now, or it could continue apace, perhaps eventually erupting new lava. It may remain confined to the summit, or it may start erupting lava from its flanks. No-one knows, which is why the Survey’s keeping watch 24/7, using a plethora of forensic scientific techniques – including geochemistry – to get a better grasp of the past, present and possible futures of one of the world’s coolest volcanoes.

Back to Top
Close Add post
X
Why Kids Matter in the Quest to Stamp Out Covid-19…ScienceLast December, when Caleb Chung, a 12-year-old in Durham, North Carolina, first heard from his dad that he might be eligible for a local clinical tria…