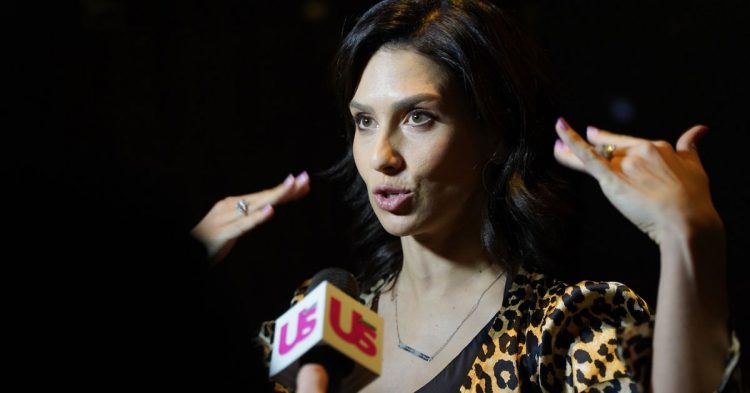 I’m not entirely sure I’d ever consciously thought about Hilaria Baldwin until this week. She occupies a level of fame slightly above social influencer but below TV actress. A podcaster and a former yoga instructor, she’s best known as the glamorous, mysterious woman to whom Alec Baldwin is married. I suppose I assumed she must be foreign; “Hilaria” sounds too breathy to be American.

Recently, though, I learned, along with the rest of the world, that the Hilaria Baldwin I barely knew is actually an aspirational European illusion created by a Bostonian named Hillary Hayward-Thomas.

The idealized Hilaria was born in Mallorca, speaks with an accent, doesn’t know the English word for “cucumber,” jogs for fun, does flamenco, loves speedboats, drinks hemp milk, eats lentils and paella, and does a plethora of workout classes. Hillary was born in Massachusetts, went to NYU, and has a brother named Jeremy.

How did there come to be two Hilarias Baldwin? Why do we suddenly know all about this? Well, it never would have come to light if not for her inability to take a joke.

Why are we talking about Hilaria Baldwin?

Hilaria/Hillary’s ever-changing Spanish ancestry was revealed and scrutinized thanks to the Streisand effect.

On December 21, Hilaria Baldwin, who has been married to actor Alec Baldwin since 2012, posted a picture of herself in fancy underwear, holding her 3-month-old son Eduardo, a.k.a Edu. She looked very fit and slim, which is often why people put photos on social media. The post caught the eye of comedian Amy Schumer, who took a shot at Hilaria on Instagram in a now-deleted repost of the image that read: “Gene and I wanted to wish everyone a happy holiday season. Enjoy it with whatever family members are talking to you this year.”

Hilaria caught Schumer’s snarky post and then responded in a four-minute video saying that Schumer was attacking Edu and body-shaming her. “We’re getting into a place of body-shaming,” she said in the video. “There’s this whole thing of ‘moms don’t look like that’ — some moms do. This mom” — pointing at herself — “does, and I am included in the inclusivity.”

This kerfuffle with Schumer brought Hilaria’s name back into the pop culture sphere. People enjoy watching rich, famous people fight. But that was just the beginning.

That’s when Twitter user @lenibriscoe pointed out a long-simmering concern about Hilaria: that her much-touted Spanish heritage is, in their assessment, totally fake.

They included a clip of Hilaria on the Today show not knowing the word for cucumber:

“I had no idea about Schumer,” @lenibriscoe told me, explaining that they had observed Hilaria’s accent for the past nine years and that it was a well-known joke in New York City. “The thing that really made me mad is that it’s so offensive to pretend to be an immigrant and struggle with English. You can just be a hot American influencer come on now.”

Someone from Spain not knowing the English word for cucumber is understandable. But someone who grew up in the Greater Boston area acting like they don’t know the word for cucumber? That raises all kinds of questions, not just about Hilaria’s Spanish heritage but about what she gains from faking it.

The simple observation of Hilaria’s accent and weird backstory prompted investigation. The most comprehensive one I found is from Tracie Egan Morrissey, a writer, producer, host of Pot Psychology, and infamous celebrity lying expert, known for taking down Jameela Jamil’s knotty anecdotes about almost dying multiple times.

In a series of Instagram stories, Morrissey explains that Hilaria’s Spanish origin story began from Hilaria stating in multiple features with Hola! USA that she was born in Spain and Spanish was her native language. Baldwin’s bio on her CAA speaking engagement site states that she was born in Mallorca. The bio has changed since Morrissey’s reporting and now has been scrubbed of Hilaria’s supposed birth country.

Hilaria also stated in a previous interview that she moved to America at 19 to attend NYU. Morrissey debunks these claims, pointing out that Hilaria is actually the Hillary Hayward-Thomas who graduated high school from the Cambridge School of Weston in Weston, Massachusetts. Her parents are Dr. Kathryn Hayward, whose family is from Massachusetts, and David Thomas, whose family has deep roots in Vermont. Thomas, Hilaria’s father, studied Spanish literature in undergrad, and he and Hayward moved to Spain in 2011.

As the story went viral, social media users on Twitter and Instagram began digging into Hilaria’s past, uncovering past interviews where she speaks with an accent and how different her voice sounds compared to her Instagram video. There’s also this video of her mother, Kathryn Hayward, who commenters pointed out seems to stumble over her daughter’s name when talking about when she decided to start a family:

here’s hilaria/hillary’s mom being interviewed about having her kids in the US during med school – notice how she stumbles over her daughter’s name pic.twitter.com/oq2YHwK6AB

A search for “Spain” or “Spanish” from Hilaria’s Twitter account yields multiple results, many of them reposts from her linked Instagram accounts. They include reminders to her followers that May 3 is Mother’s Day in Spain, an account of how her parents made a macrobiotic dinner in Spain and how that was a sign that Spain’s attitude toward health was improving, Spanish proverbs, an assertion that if you bring Spanish women (referring to herself and her mother) to a nail salon they will sing flamenco songs, references to herself as a Spanish yoga teacher, and tweets about her childhood in Spain.

The curious thing about Hilaria’s public mentions of Spain and being Spanish is that most of them seem to include very well-known Spanish touchstones, like a Westworld version of Spain where everyone just eats paella, listens to flamenco, and loves the Spanish flag. As some of Hilaria’s critics have pointed out, she used this claim of Spanish heritage for personal gain.

In response to the ongoing scrutiny about her past and what parts of her life were fabricated, Hilaria posted a seven-minute video explaining that she “is a white girl.” Her accent sounds different from the videos in which she doesn’t seem to remember the word cucumber.

In the video, Hilaria doesn’t really explain why she didn’t correct the various articles that focused on her supposed Spanish origins nor the podcasts or interviews she did where she claimed she was born in Spain. She does not clarify whether she has any Spanish ancestry. She says she spent time in Spain as a child and grew up amid the two cultures. This seems to obscure her critics’ concerns.

In 2013, Glamour launched a supplemental magazine and website called Glam Belleza Latina. Its goal was to spotlight Latinos and Latin culture, and how they’ve shaped American culture. The initial issue focused on Jennifer Lopez, designer Narciso Rodriguez, and TV anchor Natalie Morales. Also included in that issue was Hilaria Baldwin, who was touted as the magazine’s “natural beauty expert.”

It’s possible that Hilaria was just a random add to the magazine. But it sure seems like the magazine was intent on amplifying Latinx and Hispanic people, like Rodriguez, whose parents are of Spanish Cuban descent. It certainly appears that Hilaria was picked because she touted her Spanish roots.

Her critics argue that, knowing what we now know about her real American roots, Hilaria accepting offers and publicity from magazines and outlets geared toward Spanish and Latinx people was a conscious decision. That decision meant taking up space from actual Spanish and Latinx people. I’ve contacted Glamour, which folded the quarterly supplemental magazine in 2015, and will update if and when I receive a response.

Hilaria also has posted on social media about being the victim of casual racism. In 2016, she posted on Instagram about how often she’s stopped and asked if she’s a nanny because she speaks Spanish.

I have no doubt that Hilaria could have been stopped by people hearing her speak Spanish and assuming she is a nanny. These kinds of microaggressions plague people of color in predominantly white, affluent circles. But it’s bizarre that a white woman from Boston who may or may not be pretending to be a Spanish immigrant would try to co-opt that experience and post it on Instagram for clout.

Hilaria denies that she wanted to muddy the waters. “I tried to be very clear,” she says in the response video, explaining that it was various journalists and not herself, who said she was born in Spain. “I’m like, I was born in Boston. That’s the first thing I told my husband. I’m a different kind of Bostonian.”

She continues, clumsily explaining that she is ethnically a white person and that she’s culturally diverse. Being white doesn’t preclude her from being Spanish, she argues. “Europe has a lot of white people in there,” she says. “My family is white. Ethnically, I am a mix of many, many, many things; culturally, I grew up with the two cultures. So it’s really as simple as that.”

This does not clarify her own ancestry, but it is true — as we were reminded by the controversy around 2020 Best Actor Oscar nominee Antonio Banderas being referred to as a person of color — that white European Spaniards are not considered people of color.

“I’m a different kind of Bostonian”

Hilaria followed that up with another video, this one six minutes long, that again claims it’s mostly everyone else that got it wrong. She again blamed her Spanish origin story on everyone but herself.

“We’ve gotten calls from some different outlets that are planning to do different stories, and what’s frustrating is that they’ll say things that I’ve never said,” she says in the video, explaining that her interviews are a game of telephone and claims it wasn’t her who started her Spanish immigrant origin story. She doesn’t explain why she accepted the publicity from outlets like the supplemental Glamour insert.

In recent days, her husband Alec Baldwin and her stepdaughter Ireland Basinger Baldwin have defended Hilaria’s character and honor.

The odd, maybe unintended effect of those defenses and Hilaria’s videos about the controversy is that they, like her initial response to Amy Schumer, just bring more attention to this identity fiasco. Every time Hilaria and her family try to shift blame to various journalists and publications where her Spanish heritage is discussed, those interviews resurface and are examined again and again.

In these waning days of 2020, with most people just trying to get through to New Year’s Eve and taking their entertainment where they can find it — such as in the discovered potential grifts of rich white women — Hilaria is now exponentially more famous, trending on social media and Google searches. More people are interested in her story than ever before. It’s just that she’s now known for being the woman who lied about being Spanish.