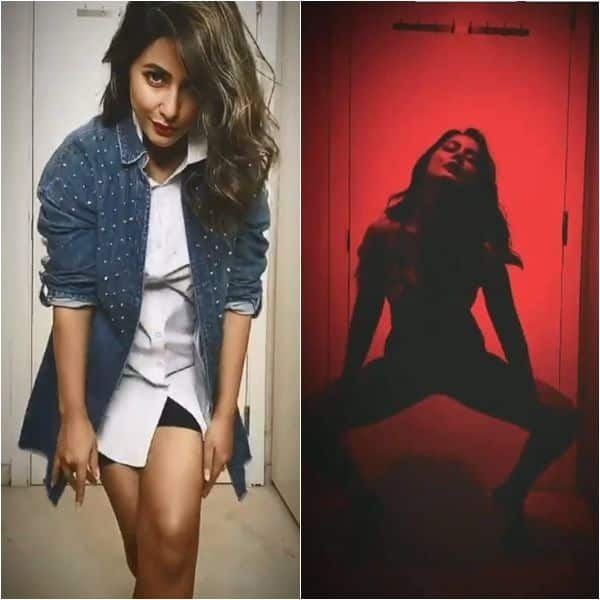 Hina Khan, who became household with her role of Akshara Singhania in Yeh Rishta Kya Kehlata Hai, is the latest celebrity to join the viral Silhouette Challenge. And her steamy video has left her fans gasping for breath. The trend was started to empower people offering them a way to feel sexy in their bodies by wearing less clothing, lingerie or nothing at all. And you have to move to the tunes of Paul Anka ‘Put Your Head on My Shoulder’ mashup with Doja Cat’s ‘Streets’. Also Read – Hina Khan’s ravishing ethnic look will set your heart on fire – view pics

In the first half of the video, Hina is seen wearing a denim jacket, white shirt and booty shorts letting her long locks down. She flaunts a cherry lips and looks at the camera seductively. As soon as the red filter begins, Hina is seen killing it with her sensuous moves wearing nothing but a bra and booty shorts. She shows off her enviable curves leaving a little to the imagination. Also Read – Bigg Boss 14: How much did Rubina Dilaik, Rahul Vaidya, Sidharth Shukla, Hina Khan, Jasmin Bhasin and others get paid for this season?

Her steamy video has blown everyone’s mind and her fans are unable to resist themselves from leaving fire emojis in the comment section. They can’t stop gushing about her hotness. The video has got over 4mn views, 450K likes and 5k comments. It was no less than a surprise treat to the fans who adore her a lot. Also Read – Hina Khan celebrates beau Rocky Jaiswal’s birthday in the most romantic way

Hina had recently shared a racy picture on social media and the plan, she said was to distract her fans. “Let me distract you,” she wrote as the caption, with a monochrome picture on Instagram, where she is seen sporting fishnets paired with shorts, knee length boots and an overcoat.

Last year, Hina’s show Yeh Rishta Kya Kehlata Hai completed 12 years. In the show, she was seen playing the title role of Akshara. Over the past 12 years, she has walked the Cannes red carpet, been a reality TV star on Bigg Boss and Khatron Ke Khiladi, had her brush with Bollywood and has also cemented her status as one of the highest paid stars on Indian television.