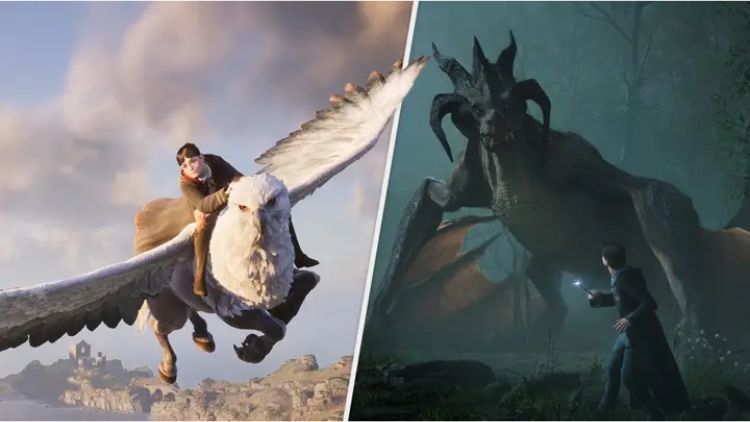 There’s a lot of mythical creatures and fantastic beasts that will be available for us to tame, mount, ride and fight in Hogwarts Legacy. Here is a list of 10 magical beasts and creatures that you will encounter in the game.

From what we’ve been shown so far, we can confidently deduce that the dragon or dragons we’ll be coming in contact with within the game will be the Hebridean Black dragon. The dragon itself is noted for having rough scales, brilliant purple eyes, razor sharp ridges on its back and an arrow shaped spike tail. It is also widely considered to be much more aggressive than its Welsh Counterpart, that being the Common Welsh Green Dragon. The Official Hogwarts Legacy account on Twitter recently posted a little teaser for us regarding dragons, it asked, Friend or Foe? Foe quickly being followed by a clip of a dragon.  So even though we’ve been informed that we’ll be able to tame beasts, we are not sure if we’ll be able to get a Hebridean black under our control just yet.

Hippogriffs are iconic with Harry Potter and its really pleasing to see them included in the game. It’s clear we’re going to be able to ride them as it’s been visually shown multiple times in the gameplay trailer. Game Director Alan Tew officially stated that “we’ll be able to soar into the sky on the back of a friendly hippogriff”. However, what’s not yet clear is how we tame these half horse, half eagle creatures that are immensely proud and extremely dangerous.

Avalanche also confirmed that we will be partaking in “Beasts” class in the game. So I wouldn’t be surprised if we tame our friendly hippogriff there, or perhaps out in the wild and outside the Hogwarts grounds. But maybe only after we’ve taken the appropriate Beasts class. Hippogriffs also are known to have different color    feathers, so it is quite possible that we may get a choice to tame our preferred color of Hippogriff.

Thestrals are a breed of winged horse with a skeletal body, reptilian features with leathery wings that are noted as resembling bats. They are a domesticated flock who are responsible for pulling the carriages that lead older students from Hogsmeade station to the gates of the castle. You can only see them if you’ve seen someone die. This means that in the gameplay reveal we were shown, our character has seen death before arriving at Hogwarts in our 5th year. On top of that, they’re well known for having a fantastic sense of direction. A Thestral can understand exactly where you want to go, even if it’s never been there before itself just by the name of the location. Thestrals may work as an option to fast travel in the game.

Avalanche tells us that Poachers outside the Hogwarts grounds lay traps in an attempt to capture, kill and sell the various properties by certain magical creatures, Mooncalves being one of them. To stop that from happening, we’ll be able to rescue creatures like this. Our suitcase or bag in-game allows us to capture Mooncalves and then transport them back to our base to heal them back to full health. But the interesting thing about these Mooncalves is that they only appear in a full-moon. And because Avalanche have officially stated that there will be seasonal weather changes throughout the game, we’ll have to wait until we actually get a full moon to see them.

We’ve seen quite a lot of Graphorns so far in all manner of reveals of the game. Mountain trolls also tried to mount them according to the books, which potentially means that after we tame our own, we can bring them back to our base and potentially ride them ourselves outside the Hogwarts grounds. Maybe we can charge around on a Graphorn firing off spells, that could be pretty fun.

Mountain Trolls are in the game from what we saw in the gameplay trailer. Game Director Alan Tew has also stated that we may be involved in a side quest where we’ll need to “Protect innocents from a dangerous troll”. As fearsome as they may be and weighing over a tonne, they are incredibly stupid, which makes them even more violent and unpredictable. There’s actually 3 types of trolls: mountain, forest and river. We seem to be getting all 3 of those different types of terrain in the game. Thus, there’s a potential to see a variety of trolls.

Goblins and House Elves are important magical creatures that will be playing a substantial role in the game. We know thanks to Avalanche that the main antagonist of this game is Ranrok, leader of the goblin rebellion. He is leading a faction of goblins against the wizarding world who they believe, have been subject to continued discrimination and prejudice. They’re highly intelligent and skilled with money and finances. They control the wizarding economy to a large extent. They run the only wizarding bank, Gringotts, which we will also be visiting in-game from the mine cart teasers that we also see in the films. They can perform magic without wands. They’re going to be a big obstacle for us in this game.

Goblins and House Elves are important magical creatures that will be playing a substantial role in the game. We know thanks to Avalanche that the main antagonist of this game is Ranrok, leader of the goblin rebellion. He is leading a faction of goblins against the wizarding world who they believe, have been subject to continued discrimination and prejudice. They’re highly intelligent and skilled with money and finances. They control the wizarding economy to a large extent. They run the only wizarding bank, Gringotts, which we will also be visiting in-game from the mine cart teasers that we also see in the films. They can perform magic without wands. They’re going to be a big obstacle for us in this game.

These all look like they may be available for us to keep as pets in this game even though it hasn’t officially been stated as such. It’s rather hinted at, as owning pets at Hogwarts is commonplace. Let’s start with Nifflers, they’re fluffy, mischievous and have an intense predilection for anything glittery, just like a magpie. They’re in fact, often kept by goblins and curse breakers who use them to burrow deep into the earth, looking for treasure, bypassing all magical protection enchantments but they can also be destructive to belongings and houses which is why they’re not great pets.

Kneazle is a cat-like creature which is incredibly intelligent, independent and occasionally aggressive to those it deems suspicious with ulterior motives. We can also see an owl on our luggage way back from the announcement trailer a few years ago. An owl cage tucked away in our base as well as being able to clearly see the Owlery building in the official poster. Speaking of that poster, in the bottom right hand corner you’ll see some colorful birds called Fwoopers. They are brightly coloured African birds that will eventually drive the listener to insanity if listening to their songs for too long. The twitter post from Hogwarts legacy around the menagerie, we can see hippogriffs, a niffler and what looks like a Phoenix

Centaurs were clearly shown within the reveal, even with a flutter of dialogue. So they might be involved in some sort of questline or side quest. Centaurs intelligence is known to rival that of humans. They live in herds from 10 to 50 and are predominantly forest dwelling, with a well known colony existing in the Forbidden Forest at Hogwarts. Which might be the place we come across them in the game. They’re also notorious for not being fond of humans generally, and will proactively avoid contact with witches, wizards and muggles through their own methods of concealment.

The trailers up to now have solely revealed smaller Acromantula’s scurrying round as frequent enemies for spell follow, however don’t be shocked to see a a lot bigger model tucked away as a boss combat.

Inferi and Dementors are technically not beasts. They’ve been presented to us quite a lot so far in the reveals. The Inferius is a corpse that has been reanimated by a Dark Wizard’s Spell, it’s not alive, it’s merely used like a puppet to do the wizard’s bidding. So they are similar but intrinsically distinct from a zombie as they are immune to bodily damages such as slashing, have great physical strength and are very quick to engage those around them. They fear light and warmth, Fire in particular and we can see from the reveal that fire spells such as Incendio will be a perfect offense and defense against them in-game.

We also see Dementors appear in the footage so far. It is not confirmed that we’ll be visiting Azkaban where they are commonly found. But if Dementors are in the game then we’ll need to conjure a Patronus spell to disperse them as no one has ever Demonstrated the ability to kill a Dementor in the wizarding world. Will we be able to conjure a patronus, if we can, will we be able to choose its form or will it be randomly given to us, just like the wizarding world?