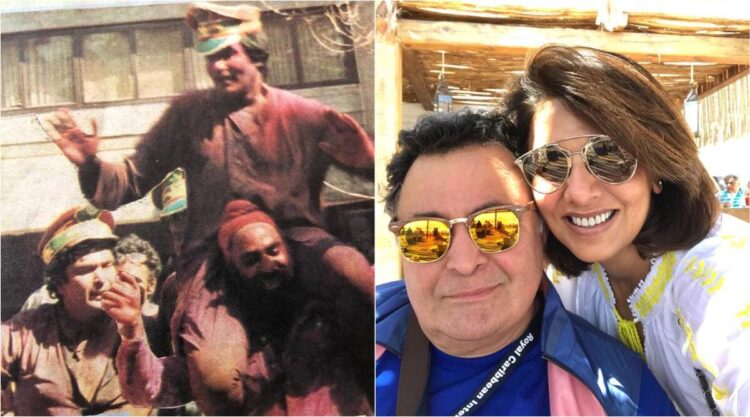 The spike in Covid-19 cases across the country has dampened the celebratory mood. However, fans have been relishing memories through throwbacks shared by many celebs on social media. After Riddhima Kapoor posted her childhood photo with brother-actor Ranbir Kapoor, mother Neetu Kapoor got nostalgic as she shared a candid photo of Rishi Kapoor from one of their Holi celebrations.

Rishi Kapoor passed away last year on April 30, after battling cancer for two years. Seeing the photo of the actor in a merry mood, joined by good friend Amitabh Bachchan, fans got quite emotional. Drenched in colours, the actors seemed to be having a gala time together.

Sharing the photo, Neetu Kapoor wrote, “Feel blessed to experience the times when HOLI was enjoyed and celebrated with colours of true love and happiness 💜💚❤️💛.” Soni Razdan commented on the photo, “Those really were the days na! ❤️❤️❤️,” while daughter Riddhima and designer Manish Malhotra also showered heart emojis on the post.

Good friend Pinkie Roshan, mother of Hrithik Roshan, joined the throwback club as she posted a photo with Neetu. Reminiscing old times, she shared the picture where the two ladies looked pretty and ravishing, smiling at the camera. Wrote Pinkie Roshan, “#happy holi# from my memories album# I think it’s like maybe 30 years ago# at Chintu Neetu’s house #missyou bhaiya #love you Neetu.”

The photo definitely brought back happy memories for Neetu as she replied, “Awww pinks,” with a love-struck emoji. Neetu’s daughter Riddhima also dropped a heart emoji on the post.

Neetu Kapoor recently graced the Indian Idol 12 show, which dedicated its Sunday episode to Rishi Kapoor and Neetu Kapoor. On the stage, for the first time, Neetu opened up about her love story, and revealed how she was Rishi’s ‘wingwoman’ before they started dating. Ranbir Kapoor and Riddhima Kapoor also shared some heartfelt messages for their mother. Her daughter shared how her father couldn’t do without Neetu for even a moment. “Even when mummy (Neetu) would go to the bathroom, he would be like, ‘kahan gayi Neetu?’ He could not do without my mother. He was so much in love with mummy.” While left in tears, Neetu smiled as her daughter called her ‘iron lady’ and a true ‘Indian Idol’.