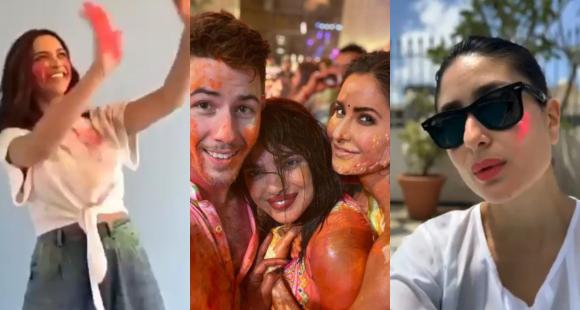 Holi, the festival of colours, is here but due to the rising COVID 19 cases, several restrictions have been imposed this year too. Hence, amid this, even celebs might skip celebrations. Here’s a throwback to celebrations in 2020 where stars like Kareena, Priyanka, Deepika & more let their hair down.

Every year, festivals are something that everyone including Bollywood celebs look forward to. Talking about festivals, Holi over the years in Bollywood has been a fun and colourful affair. With big names throwing bashes and get-togethers, Bollywood stars gear up to party in style and with lots of colour. However, like last year, COVID 19 rising cases have put a damper on the celebration this year too. Amid this, here”s a complete look back at how stars like Priyanka Chopra Jonas, Nick Jonas, Katrina Kaif, Kareena Kapoor Khan, Deepika Padukone and others celebrated the festival last year.

Priyanka Chopra and Nick Jonas brought hubby with her all the way from the US to let him experience the magic of Indian Holi and while she did celebrate privately too, it was her presence with Katrina Kaif and Vicky Kaushal at a Bollywood bash in 2020 that grabbed eyeballs. Last year, Priyanka, Katrina, Vicky, Nick and other stars got together and partied the night away on Holi. Photos and videos from the night were all over social media and even gave all a glimpse of the rumoured duo Katrina and Vicky having fun at the bash.

Nick and Priyanka celebrated Holi with the stars as well as privately with the latter’s close family members and friends too. Videos of little kids at a farmhouse running behind Priyanka and Nick with a bucket filled with colour surfaced on social media and left fans in awe of how ‘National Jiju’ enjoyed his first Holi in India with Priyanka and her family members.

Last year on Holi, Deepika stayed in and celebrated with family. She shared a video of dancing and doing the hook step of her song, Balam Pichkari and left netizens in complete awe. She was seen drenched in colours in a white top and jeans as she beamed with joy on the festival of colours.

Shahid Kapoor had got a special surprise last year on Holi from wife Mira Rajput as she had gotten initials of his name ‘SK’ painted with colour on her neck. Mira had shared the photo on social media and gave all a glimpse of her Holi celebrations.

Last year, right before Holi, Kareena had made her Instagram debut and well, on the festival of colours, the gorgeous star shared a glimpse of their rooftop celebration. Dressed in all white, Saif, Kareena and Taimur were papped making their way for celebrations and later, Kareena had even shared a photo of Taimur covered with a bit of pink colour. She herself shared a selfie where we could see a line of pink colour on her face.

Inaaya along with her other little friends joined Kunal and Soha to celebrate the festival of colours. Photos of Inaaya picking colour from a plate and applying to her friends’ face went viral on social media. Dressed in cute and vibrant clothes, the cutie patootie was a sight to behold.

7. Karisma Kapoor and her kids’ fun holi with water and colours

Karisma Kapoor and her son Kiaan Raj celebrated the festival of colours at home. A photo was shared by Karisma where she along with kids was standing on the balcony and water was splashed on them.

Last year, prior to the lockdown, Sara was in Varanasi as she was shooting for Atrangi Re with Dhanush. There, she celebrated Holi with her best friend Sara Vaisoha and shared a video where we could see the besties twinning in pink outfits and showering flowers on each other.

Aishwarya along with daughter Aaradhya posed in front of the backdrop of the bonfire on Holika Dehan as they together wished everyone on Holi. With her post, Aishwarya gave all fans a glimpse of how Bachchan’s celebrated a low key Holi last year.

Sunny Leone and Daniel Weber also hosted a small bash for very close friends on Holi last year where their little ones Noah, Asher and Nisha let their hair down and had a blast. Photos from the party were shared by Sunny and Daniel on social media and it gave us the cutest Holi feels last year as her kids Nisha, Noah and Asher were smeared with colour.

Kangana Ranaut had shared a selfie on Instagram where she was seen covered in colour with brother Aksht and other family members. The Thalaivi star had a blast last year only among her close family members and her selfie with them took over the internet.

Hardik and Natasa had shared photos from their intimate Holi celebration last year on social media. In the photo, Hardik along with Natasa, Krunal Pandya and Pankhuri Sharma could be seen dressed in white with colour on their faces as they beamed with joy on the festival of colours.

Also Read| Holi 2021: 4 Traditional and healthy snacks with expert tips from a dietician to make at home