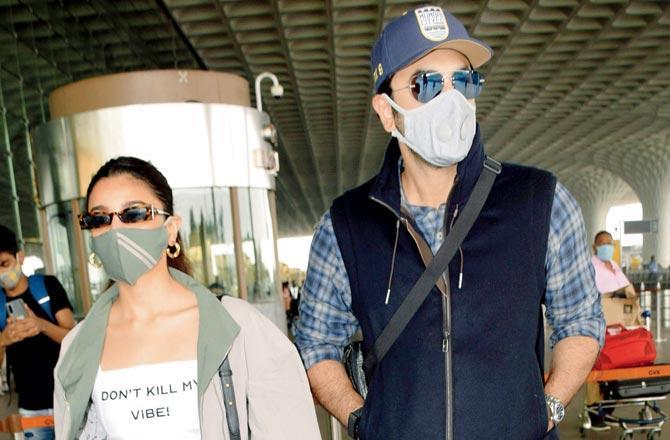 Barely a day after Alia Bhatt returned from the shoot of SS Rajamouli’s RRR in Hyderabad, she boarded an aircraft again. On Monday, she and beau Ranbir Kapoor were papped at the airport reportedly on way to Goa. The couple is headed for a year-end break by the beachside. Bhatt’s statement T-shirt read: ‘Don’t kill my vibe’. Point noted.

The duo will share the screen space in Ayan Mukerji’s Brahmastra. This is the first time Alia Bhatt and Ranbir Kapoor will be seen together by their fans. The film also stars Amitabh Bachchan, Nagarjuna, Dimple Kapadia, and Mouni Roy. This film was earlier titled Dragon and was slated to release on Christmas 2016. However, due to the massively mounted scale, the makers needed more time to shape and enhance it.

Speaking about her professional journey, Alia Bhatt will be next seen in Sanjay Leela Bhansali’s Gangubai Kathiawadi. The actress also has a series of the interesting line-up including SS Rajamouli’s RRR, which is slated to release on January 8, 2021, and Karan Johar’s Takht, which will arrive on December 24, 2021. This period drama also has Anil Kapoor, Kareena Kapoor Khan, Ranveer Singh, Bhumi Pednekar, Vicky Kaushal, and Janhvi Kapoor.

On the other hand, Ranbir Kapoor has Shamshera, apart from the fantasy drama. In a media interaction, the actor shared, “Shamshera is exactly the film I was looking for. While growing up watching Hindi commercial cinema, I had an image of what a film hero should be doing. Shamshera allows me to do everything that I had imagined and it’s a very exciting project for me.”