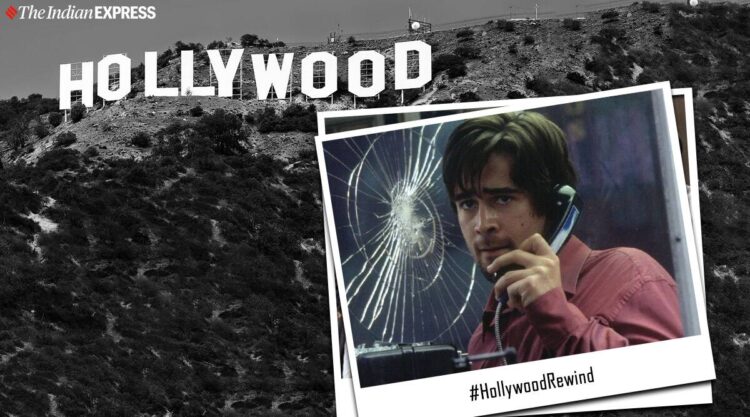 There are a lot of ways to write and direct a thriller. Usually, to heighten the suspense, people play with spaces, add more cast members to thicken the plot etcetera. But that was not the case with the 2002 Joel Schumacher directorial Phone Booth. The Colin-Farrell-starrer was, in many ways, ahead of its time.

Most of the film featured a phone booth with a frantic Colin Farrell on a call. For the uninitiated, the storyline follows a man named Stuart Shepard (Colin Farrell) who places a call to his lover Pam (Katie Holmes) from a booth in central New York. Once he is done, the phone starts ringing again. Stuart picks up the call and his life changes. An unnamed caller with a gun, who knows intimate details about his personal and professional life, threatens to kill Stuart if he decides to hang up on him. The rest of the story forms the crux of the plot.

The sniper (voiced by a very convincing Kiefer Sutherland) decides to play god as he taunts, sneers and reminds Stuart of his misdeeds and failings. But the whole thing would have come undone had a person with less talent than Farrell played Stuart. Imagine multiple close-ups of your sweat-drenched face, trying to act off someone you cannot see throughout the whole length of the movie. The actor’s every expression, every twitch, every movement was under a microscopic lens. Definitely no easy feat. But Farrell rose to the occasion and how.

The fashion in which Stuart’s voice grew louder when he tried to sound more confident and when it whimpered as he struggled to keep his emotions under control, the widening of the eyes when he realised how he could no longer lie to people, and surely not to the sniper — everything was excellent, almost infallible.

And then there is that scene, the climax of the movie, when everything comes crashing down in one big blow for Stuart as he gets out of the booth and confesses his crimes to cops, his lover, his wife and the bystanders at large. Such an emotionally-charged scene, which could have been transformed into a more sentimental and cringe-inducing act, was taken in one shot. Apparently, Farrell was greeted with a round of applause after concluding the take. And rightly so!

Here is another trivia about Phone Booth. According to IMDB, Transformers director Michael Bay had considered helming the movie, and one of the first things he had asked the writers and producers was, “How can we get him out of the phone booth?” Bay is famously known for his over-the-top actioners, which he wouldn’t have been able to get on screen with his hero trapped in a phone booth. All I can say is, thank heavens it was Schumacher who ended up directing the film. As it turns out, we have our own version of Phone Booth. An Indian remake of the movie, called Knock Out, released a decade ago. It featured Kangana Ranaut, Irrfan Khan and Sanjay Dutt in pivotal roles. Unfortunately, it didn’t do very well at the box office, unlike the original. Phone Booth minted USD 98 million against its humble budget of only USD 13 million upon its release.

You can watch Phone Booth on Google Play.