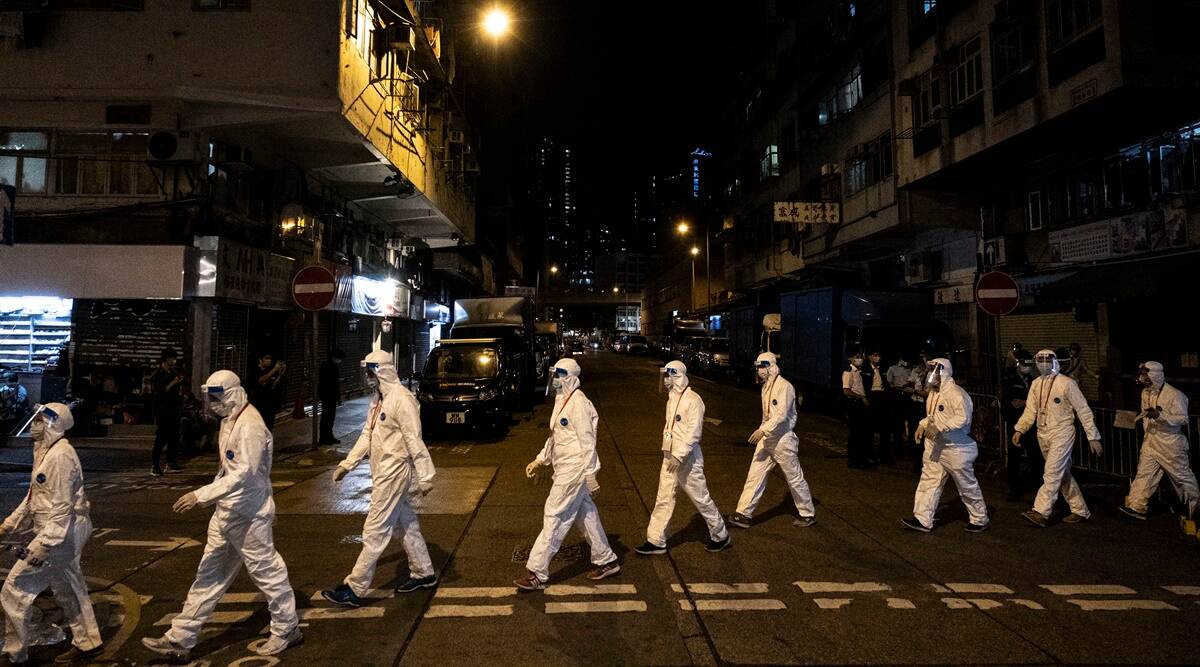 Written by Vivian Wang and Tiffany May

When Shirley Leung, 60, woke up enclosed in Hong Kong’s first coronavirus lockdown, she surveyed the tiny room she shares with her adult son, which fits a single bed and cardboard boxes and plastic tubs for storing clothes.

She tried to ignore the smell of the ceiling and walls, which were blanketed with mold. She rationed out the fresh vegetables she had at home, dissatisfied with the canned foods and instant noodles the government had provided when it imposed the restrictions Saturday. She considered the cramped, interconnected nature of her apartment building.

“If one room is infected, then how is it possible for cases not to spread among subdivided flats?” Leung said in a telephone interview. “How can it be safe?”

Hong Kong has long been one of the most unequal places on Earth, a city where sleek luxury malls sit shoulder-to-shoulder with overcrowded tenements where the bathroom sometimes doubles as the kitchen. In normal times, that inequality is often concealed by the city’s glittery surface. But during the coronavirus pandemic, its cost has become unmistakable.

More than 160 confirmed cases were found in the neighborhood of Jordan from Jan. 1 to the end of last week, out of about 1,100 citywide. The government responded by locking down 10,000 residents in a 16-block area. More than 3,000 workers, many in hazmat suits, descended on the area to conduct mass testing.

Hong Kong’s chief executive, Carrie Lam, said Tuesday that the lockdown had been a success and added that more could be forthcoming; officials announced one in nearby Yau Ma Tei soon after.

A resident in Jordan, a working-class neighborhood of Hong Kong, is tested for COVID-19 on Saturday, Jan. 23, 2021. (Lam Yik Fei/The New York Times)

Officials suggested that the dilapidated living conditions of many residents in Jordan had fueled the virus’ spread. A densely packed neighborhood known for a lively night market, aging high-rise apartments and plentiful eateries, Jordan is home to some of the city’s highest concentrations of tenements, the subdivided flats that are created when apartments are parceled out into two or more smaller ones.

More than 200,000 of the city’s poorest residents live in such units, where the average living space per person is 48 square feet — less than one-third the size of a New York City parking space. Some spaces are so tiny and restrictive that they are called cages or coffins.

The same conditions that may have led to the outbreak also made the lockdown particularly painful for many residents, who worried about missing even a day of work or feared being trapped in poorly ventilated hotbeds of transmission. Officials admitted that they did not know exactly how many people lived in the subdivided apartments, complicating efforts to test everyone. Discrimination against low-income South Asian residents, many of whom are concentrated in the area, also caused problems.

Some have blamed the government for allowing the conditions for an outbreak to fester and then imposing heavy-handed measures on a group that can least afford to bear them. Wealthy Hong Kongers have caused outbreaks of their own or flouted social-distancing rules, without similar consequences.

“If they did anything wrong, it is to be poor, to live in a subdivided flat, or to have a different skin color,” said Andy Yu, an elected official in the lockdown area.

Since the pandemic started, the subdivided apartments have been a source of concern.

Leung, the retiree, and her son have just one bed, which she sleeps in at night and her son sleeps in during the day, after returning from overnight shifts as a construction worker. A roof beam was showing cracks, but the landlord had put off fixing it, she said. The mold has also been a consistent problem, because of dirty water dripping from a neighboring unit.

The plumbing in subdivided flats is often reconfigured to allow for more bathrooms or kitchens, but the installation is frequently faulty. During the SARS outbreak in 2002-03, more than 300 people in one housing estate were infected, and 42 died, after the virus spread through defective plumbing.

The government promised reforms after SARS but has acknowledged that the situation remains perilous.

“Many of the buildings in the restricted area are older and in disrepair,” Sophia Chan, the secretary for food and health, said on Saturday. “The risk of community infection is very high.”

The lockdown ultimately lasted just two days, until midnight Sunday, when the government said it had successfully tested most of the area’s residents. Thirteen people tested positive.

But experts said the government had failed to address the underlying issues.

Wong Hung, the associate director of the Institute of Health Equity at the Chinese University of Hong Kong, said the government did not adequately regulate subdivided flats.

“They’re afraid that if they do anything, there is no place these kinds of lower-income families can find accommodation,” Wong said. Hong Kong’s real-estate market is consistently ranked as the world’s least affordable.

Income inequality in Hong Kong is also tightly interwoven with ethnicity, and the pandemic has exacerbated long-standing discrimination against South Asian residents, who make up about 1% of the city’s population. Nearly one-third of South Asian families with children in Hong Kong fall below the poverty line, almost double the proportion for all families citywide, according to government data.

Many South Asians live in and around Jordan, including in subdivided flats, and as the virus spread, some locals began making sweeping accusations of unhygienic behavior.

Raymond Ho, a senior health official, stoked outrage last week when he suggested that Hong Kong’s ethnic minorities were fueling transmission because “they like to share food, smoke, drink alcohol and chat together.” Lam, the city’s leader, later said the government was not suggesting that the spread of the disease was linked to ethnicity.

Sushil Newa, the owner of a brightly painted Nepalese restaurant in the lockdown zone, showed screenshots on his phone of commenters online comparing his community to animals and suggesting they were alcoholics.

“We’re just working hard here, paying taxes, so how come we are isolated from Hong Kong?” said Newa, referring to the discrimination, as an employee scooped containers of takeout biryani.

Still, Newa said he supported the lockdown. Though he had lost money, controlling the outbreak was more important, he said.

Other business owners agreed but also demanded compensation from the government.

Low Hung-kau, the owner of a corner stall, Shanghai Delicious Foods, said he was forced to discard ingredients he had prepared in advance for steamed buns — an extra blow on top of the drop in business since the neighborhood outbreak began.

He spent the day after the lockdown rallying neighboring business owners to call on the government to pay at least part of their losses over the weekend. Government officials have dodged questions about compensation, saying only that they hoped employers would not deduct the salaries of employees who had missed work.

Activists have criticized the government throughout the pandemic for its relief efforts, noting that it did not offer unemployment assistance. In addition, much of the government’s aid has been targeted at employers rather than employees. Some companies have applied for subsidies in return for keeping employees on the payroll, then reneged on that pledge.

Some had little choice but to work through the lockdown, despite the risks.

Ho Lai-ha, a 71-year-old street cleaner, said she had swept roads and cleared sewers over the weekend, just days after they were cited as potential sources of contamination.

“I’m a bit scared, but there’s no other way,” she said as she dunked a duster into an open grate Monday. “The area was locked down, but our work continues.”