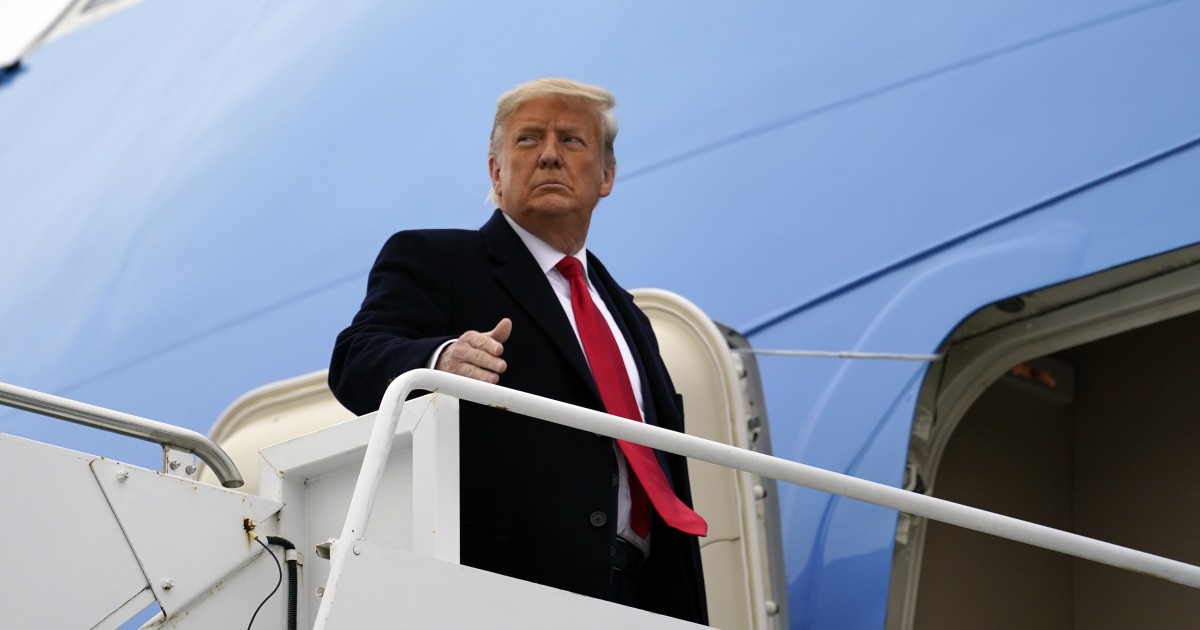 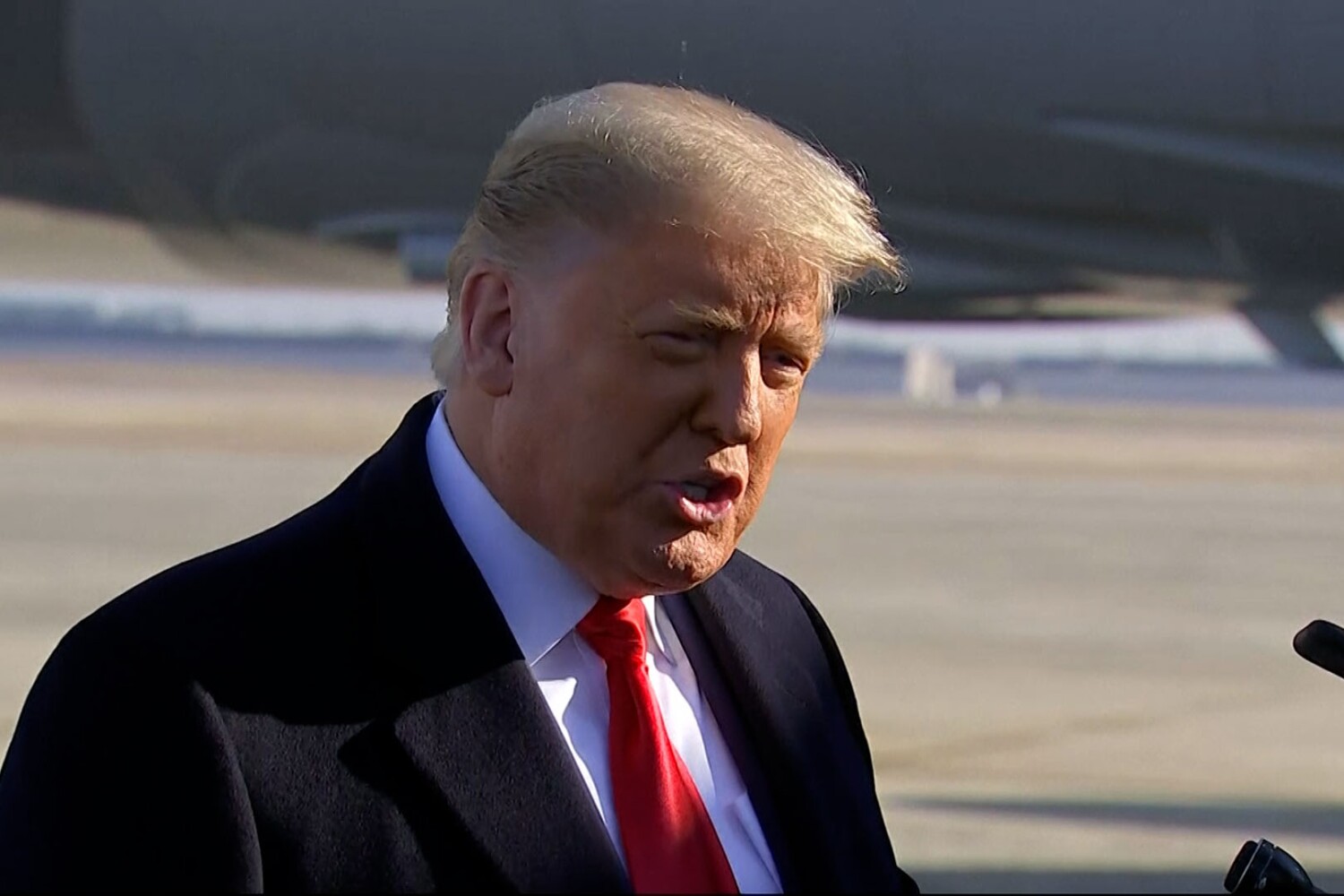 As President Trump denied responsibility for the U.S. Capitol assault that left five people dead, the FBI vowed Tuesday to prosecute hundreds of his supporters who took part in the attack, and several House Republicans — including the No. 3 GOP leader — announced they would vote for impeachment.

It marked the starkest Republican defection yet and could open the door for other GOP House members to join Democrats in Wednesday’s historic impeachment vote.

Vice President Mike Pence — responding for the first time to Democratic calls that he take constitutional steps to remove Trump from office — declined to do so, and implored House Speaker Nancy Pelosi (D-San Francisco) and House Democrats not to pass a resolution urging him to invoke the 25th Amendment.

“I urge you and every member of Congress to avoid actions that would further divide and inflame the passions of the moment,” Pence said in a letter. “Work with us to lower the temperature and unite our country as we prepare to inaugurate President-elect Joe Biden as the next president of the United States. I pledge to you I will continue to do my part to work in good faith with the incoming administration to ensure an orderly transition of power.”

But the House passed the resolution anyway by a vote of 223 to 205, with the support of one Republican, Rep. Adam Kinzinger of Illinois.

“The facts are very clear,” Pelosi said in a floor speech. “The president called for this seditious attack…. He and his family cheered and celebrated the desecration of the Capitol.”

Earlier in the day, Trump, making his first public appearance since the Jan. 6 attack, denied inciting his supporters and denounced the move to impeach him a second time.

“The impeachment hoax is a continuation of the greatest and most vicious witch hunt in the history of our country,” Trump said in Alamo, Texas, where he visited the border wall. “It’s causing tremendous anger, division and pain, far greater than most people will ever understand, which is very dangerous for the USA, especially at this very tender time.”

He insisted his speech to supporters shortly before the melee was “totally appropriate.”

It was not the contrition some Republicans had hoped to hear, and seemed to accelerate Trump’s loss of power and influence in the final days of his presidency.

By late afternoon, Rep. John Katko, a moderate Republican from upstate New York, became the first in his party to announce he would vote to impeach Trump. Cheney became the second, followed by Rep. Adam Kinzinger of Illinois. Rep. Fred Upton of Michigan said in the evening that he would also vote to impeach, declaring that “enough is enough.” Washington Republican Rep. Jaime Herrera Beutler also said she would vote yes.

Nearly a dozen others are thought to be considering a vote for impeachment.

That’s a stark contrast from 2019, when no House Republican dared vote to impeach Trump for his pressuring of Ukrainian officials to investigate then-presidential rival and now President-elect Joe Biden and his son Hunter Biden. That unity was long a source of pride for Trump.

Even Republicans who side with Trump have avoided defending his actions. They instead have warned that punishing him could further divide the nation.

Rep. Jim Jordan (R-Ohio) portrayed efforts to remove Trump as politically motivated. “Continuing calls to impeach the president or remove him with the 25th Amendment … one week before he is set to leave … is, I don’t think, very healthy,” Jordan said during a House committee meeting earlier in the day.

Democrats lambasted Jordan for continuing to cling to the false claims of widespread election fraud that inspired the violent mob.

Democratic lawmakers have prepared a single article of impeachment, accusing the president of inciting an insurrection. With Democratic control of the House and the GOP defections, Trump is all but certain to become the only U.S. president to be impeached twice.

Amid heightened security concerns, metal detectors were installed at the entrance to the House chamber Tuesday night. Lawmakers were also subject to scanning with metal-detecting wands, yet another ignominious first in the Capitol in response to widespread concern of renewed violence surrounding the vote and next week’s inauguration.

The new security procedures became a point of partisan tension itself, with some Republican members expressing outrage. At least a dozen of the lawmakers pushed past the police or walked around the detectors, including Colorado Rep. Lauren Boebert, who refused to let the police search her bag after she set off the metal detector.

“I am legally permitted to carry my firearm in Washington, D.C. and within the Capitol complex,” Boebert later tweeted, even though House rules specifically prohibit firearms in the chamber. “Metal detectors outside of the House would not have stopped the violence we saw last week — it’s just another political stunt by Speaker Pelosi.”

The FBI warned Monday that Trump supporters were planning armed protests at all 50 state capitols and the U.S. Capitol in the coming days.

Federal prosecutors said Tuesday they had opened a broad investigation of possible sedition and conspiracy in connection with the attack on the Capitol. More than 170 case files have been opened by the FBI, with charges already filed against over 70 people.

Michael Sherwin, the acting U.S. attorney in Washington, said at a news briefing that the number of people charged would probably “grow into the hundreds.”

“We’re looking at significant felony cases tied to sedition” and conspiracy that could carry prison terms of up to 20 years, Sherwin said.

In an extraordinary message to all members of the armed forces Tuesday, the military’s top leadership called the Jan. 6 Capitol attack “a direct assault on the U.S. Congress, the Capitol building and our constitutional process.”

The email message, signed by Chairman of the Joint Chiefs of Staff Mark A. Milley and the uniformed heads of the Army, Navy, Air Force, Marine Corps, Space Force and National Guard, emphasized that Biden would be inaugurated next week and become commander in chief.

The military leaders told troops that their job was to “support and defend the Constitution,” adding that “any act to disrupt the constitutional process is not only against our traditions, values, and oath; it is against the law.”

During his brief public appearances Tuesday, Trump insisted that “we want no violence.” He said there was nothing wrong with his speech at the rally outside the White House last week, when he urged his supporters to march on the Capitol as Congress was conducting the ceremonial counting of the electoral votes to formalize Biden’s victory.

“They’ve analyzed my speech and my words and my final paragraph, my final sentence, and everybody just thought it was totally appropriate,” Trump falsely claimed.

Sen. Rob Portman (R-Ohio) released a statement blaming Trump and saying the president would also bear responsibility for further violence in Washington and at state capitols if he does not explicitly and unambiguously address the nation and urge his supporters to stand down.

As lawmakers worried about the prospect of more violence, they also struggled with exposure to the coronavirus. The attack on the Capitol threatened to become a super-spreader event, as lawmakers were forced together in close quarters in safe rooms where some refused to wear masks. By Tuesday, several House members had tested positive for the virus that causes COVID-19.

The outbreak moved House leaders to impose rules during Tuesday’s debate that included fines for failing to comply with their mask requirement on the House floor. Lawmakers could be slapped with a $500 fine for a first offense and $2,500 for a second offense. The mask rule touched off further anger and protest from some Republican lawmakers.