House Managers Deliver Article Of Impeachment To Senate, Setting Stage For Another Trial Of Donald Trump 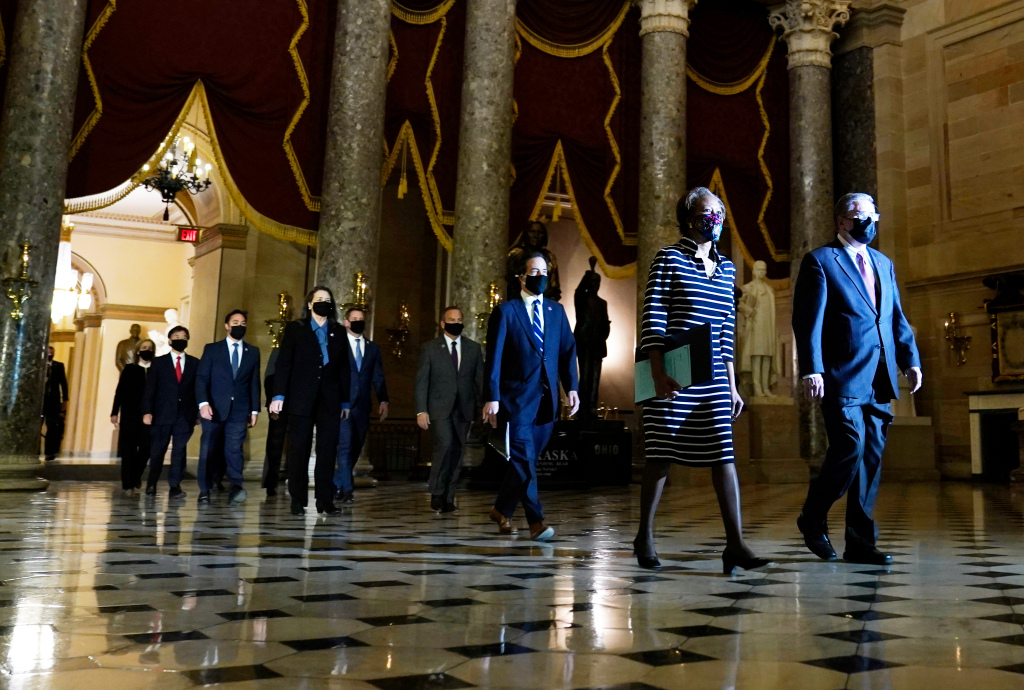 A delegation of House members delivered an article of impeachment against Donald Trump to the U.S. Senate tonight, a ceremony that triggers a process for a trial on charges that the former president incited the Jan. 6 attack on the Capitol.

News networks and some of the broadcasters carried the walk to the Senate chamber, led by acting Sergeant at Arms Tim Blodgett and Clerk of the House Cheryl Johnson. Following them was lead impeachment manager Rep. Jamie Raskin (D-MD), who along with other managers will be tasked with prosecuting the case against Trump. A trial is scheduled to begin the week of Feb. 8.

Raskin read the charge against Trump, for inciting the insurrection at the Capitol. Pro-Trump rioters overran police barricades and stormed into the complex as lawmakers met to certify the electoral votes in favor of Joe Biden. Raskin cited Trump’s statement at a rally before the riot in which he said, “if you don’t fight like hell, you’re not going to have a country anymore.” Five people died in the attack.

It was just over a year ago that Trump faced other impeachment charges, for abuse of power and obstructing Congress. He was acquitted.

On Jan. 13, Trump became the first president to be impeached twice. He also will be the first to face a trial after leaving office. Raskin made clear that if convicted, the House is seeking to bar Trump from running for future office.

It will take 2/3 of the Senate to convict Trump, or 17 Republicans joining all 50 Democrats and independents. If that happens, then it would take a simple majority to bar Trump from holding office again.

The trial will be different than that of last year, as Chief Justice John Roberts will not preside. Instead, Sen. Patrick Leahy, as the president pro tem of the Senate, will sit in that chair.

The House voted 232-197 to impeach Trump, with 10 Republicans joining all Democrats in favor.