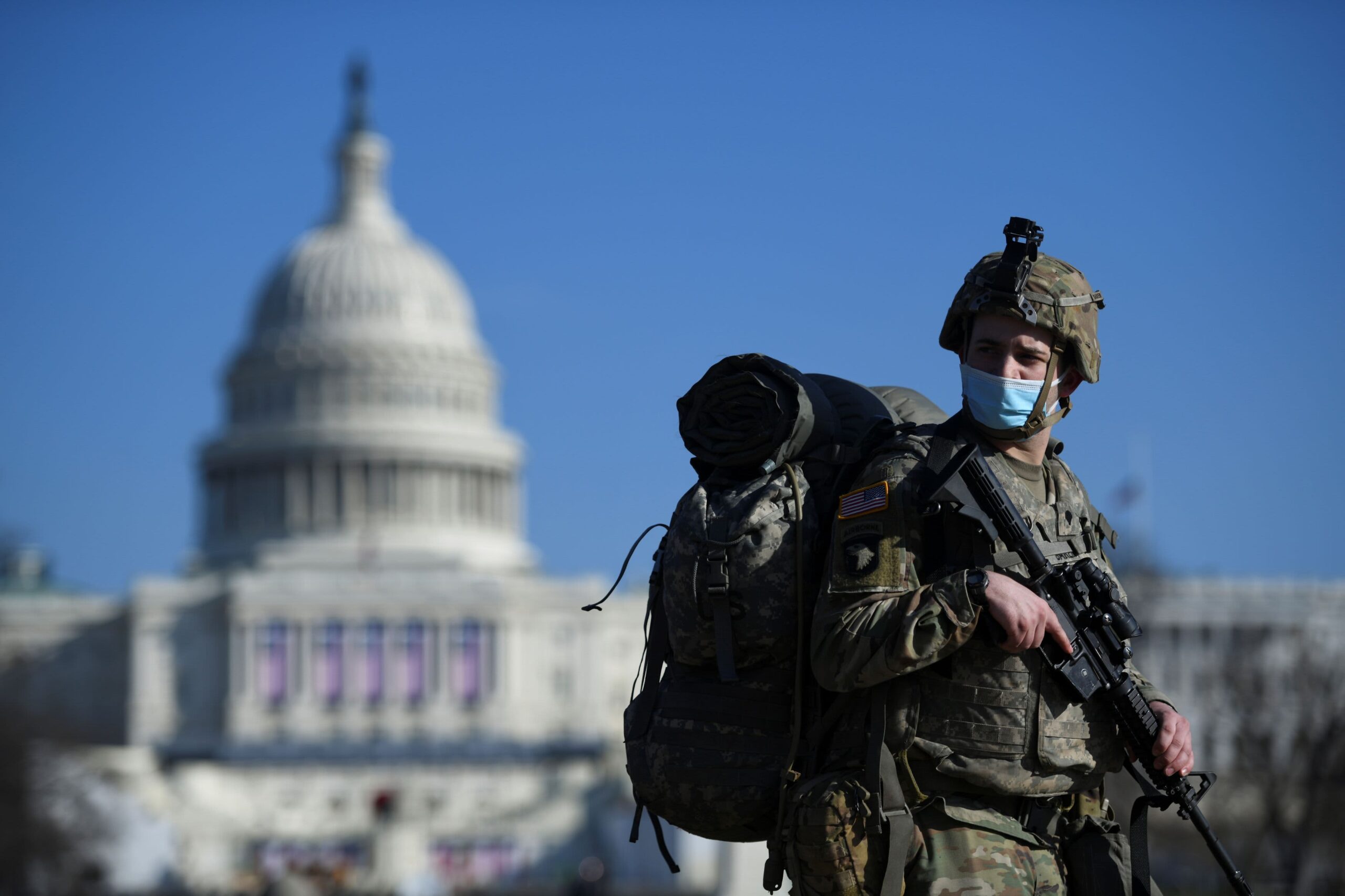 A member of the National Guard mounts guard near the U.S. Capitol building, as the House of Representatives debates impeaching U.S. President Donald Trump a week after his supporters stormed the Capitol building in Washington, U.S., January 13, 2021.

The Democratic-led House of Representatives on Saturday sent a letter to FBI Director Chris Wray and other agency chiefs seeking information on the intelligence and security failures that led up to the breach of the U.S. Capitol on Jan. 6 that forced lawmakers into hiding.

Four House committee chairs signed onto the letter, which called for documents and briefings from the FBI, the Department of Homeland Security, the National Counterterrorism Center and the Director of National Intelligence on what was known ahead of the attack.

“This still-emerging story is one of astounding bravery by some U.S. Capitol Police and other officers; of staggering treachery by violent criminals; and of apparent and high-level failures — in particular, with respect to intelligence and security preparedness,” the committees wrote.

The probe comes as lawmakers — and Democrats in particular — are clamoring for more information on how a mob of President Donald Trump supporters was able to break into the so-called “People’s House,” which has its own police force, and delay the certification of President-elect Joe Biden’s Electoral College victory by several hours.

The inspectors general of the Department of Justice, Defense, Homeland Security and Interior have launched reviews of their agency’s actions connected to the attack.

In the letter, lawmakers cited press reporting that the U.S. Capitol Police had been warned that Trump supporters would attempt to violently enter into the Capitol.

NBC News reported on Jan. 10 that the FBI and the New York Police Department passed information to the Capitol Police about threats of violence directed at the counting of the Electoral College votes.

The Washington Post reported on Jan. 12 that an FBI field office in Virginia had warned ahead of the attack that extremists headed to Washington were planning for “war.”

“Security and logistical preparations before January 6 were not consistent with the prospect of serious and widespread violence. Yet, according to media accounts that have surfaced in recent days, federal and other authorities earlier on possessed — and may have shared with some parties — intelligence and other information forecasting a dire security threat against the Congress’s meeting to certify the election results,” the committee chairs wrote.

U.S. Capitol Police are seen with “less lethal” weapons as they face a mob of supporters of U.S. President Donald Trump as they storm the U.S. Capitol Building in Washington, U.S., January 6, 2021.

“These latter reports, if acted upon, might have prompted more extensive planning for the event, and the infusion of far greater security and other resources,” they added.

Capitol Police officials have said they did not see FBI intelligence ahead of the attack.

The committee chairs lay out three broad lines of inquiry that they will pursue.

The first is what was known by the intelligence community and law enforcement ahead of, during and after the attack. The lawmakers also said they will be probing whether any foreign powers played a role in exploiting the crisis.

The second prong the committees are examining is whether any current or former holders of national security clearances participated in the insurrection.

The committees are also asking for information on government policy in response to the attack, including measures to prevent those implicated in crimes from traveling.

“The Committees expect and appreciate your full cooperation with this matter – while of course recognizing that resources appropriately and immediately must be allocated to efforts to counter any continuing threats to the transfer of power, including the presidential inauguration and related activities,” the committee chairs wrote.