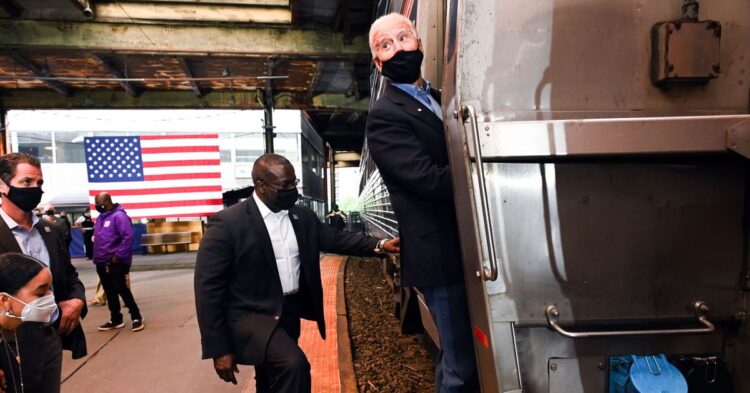 From boosting public transit to funding new research and development in breakthrough clean energy technologies, the measures that could help cut greenhouse gas emissions add up to more than $1 trillion over eight years — larger than the total recovery package Obama passed to tackle the Great Recession.

Yet, Democrats and advocates for the clean energy transition are split over whether the investment package is big enough to tackle the climate crisis. Josh Freed, the head of the climate and energy program at center-left think tank Third Way, told Vox that the plan’s scale is appropriate because it will also spur further investment from the private sector. But some progressives are pushing for up to trillions more in spending.

On Tuesday, a coalition of labor and environmental groups called for $4 trillion in climate investments, and the Congressional Progressive Caucus has proposed $1 trillion per year in spending over the coming decade.

Varshini Prakash is the founder of the Sunrise Movement, which backs the latter proposal. “The priorities and approach are right — this contains the frameworks of the Green New Deal — but as of now this plan could only be considered a beginning of that truly transformative vision,” she said in a statement.

But even at its current size, the plan would be a major break from the past. “We’re finally going to see comprehensive climate legislation, really for the first time, out of Congress,” said Leah Stokes, a political scientist at University of California Santa Barbara.

In its effort to address the diverse sources of heat-trapping gasses in the US, the plan spans a dizzying array of climate solutions. Here are some of the key proposals that could play the biggest role in slashing emissions.

The climate ideas in the American Jobs Plan are an extension of Biden’s campaign pledges to make major cuts to US greenhouse gas emissions a top priority of his presidency.

Transportation is the first big plank of the plan. The sector has become the nation’s top source of carbon emissions. To change that, the Biden proposal would speed up the transition to electric vehicles by funding states and the private sector to build 500,000 electric vehicle chargers — a plan originally introduced by Sen. Chuck Schumer (D-NY).

It will also build off of the American Rescue Plan to revive the nation’s struggling public transit, which will help keep polluting cars off the roads. $85 billion will be put toward repairing existing buses, light rail, and other transit lines. Not all of the plan’s transportation investments will be explicitly green, though; a chunk of the funds will also go to maintaining roads and highways.

For the second-largest contributor to the US carbon footprint — the power sector — the plan proposes establishing a Clean Electricity Standard. The policy would mandate utilities across the country to increase their share of clean electricity. Along with the expanded 10-year tax credits for renewable energy in the plan, it would be a key tool to get the nation to Biden’s goal of 100 percent carbon-free electricity by 2035.

“This is something that Biden has been talking about since the campaign trail and since he took office, but it’s really important to see it central to the plan,” said Stokes, who recently co-authored a report with Evergreen Action and Data for Progress explaining how the Clean Electricity Standard could be passed through budget reconciliation.

Another headline item from the plan is a huge increase in research and development investment to promote new clean energy technologies and make existing technologies more efficient. “The American Jobs Plan is the biggest increase in our federal non-defense research and development budget spending on record,” Biden said during his Pittsburgh speech.

Typically, only $8 billion in the federal research budget has gone toward energy, as David Hart, a professor of public policy at George Mason University who focuses on energy innovation, explained on Twitter. The plan would pour $35 billion into research for climate technology breakthroughs and $15 billion for pilot projects in critical areas from energy storage to hydrogen.

These research investments reflect a Biden philosophy that is woven into the whole plan: bringing innovation back to America and shortening the road to a clean energy future. Throughout the plan and his speech, Biden also said increasing R&D investment would be essential for the US to outcompete China. “The rest of the world is closing in and closing in fast. We can’t allow this to continue,” he said.

Another theme that has extended from Biden’s campaign to this plan is racial and economic justice. Specific measures include a call for funding to increase transportation access for communities that have historically been cut off from cities due to unjust urban planning. Julian Brave NoiseCat, vice president of policy and strategy at Data for Progress, highlighted some of the other main environmental justice proposals.

Environmental justice provisions like replacing every single lead pipe in the country, investing in and retrofitting public and affordable housing, as well as directing 40% of investments to disadvantaged communities are all included—a testament to the movement’s influence.

The plan’s future in Congress

In the coming weeks, the Biden plan will be subjected to lengthy negotiations in Congress. In his Pittsburgh speech, Biden once again committed to a bipartisan process, inviting Republican members of Congress to discussions in the Oval Office. But Democrats are prepared to pass the bill through budget reconciliation, which only requires the slim Democratic majority.

Keeping the Democratic caucus together is bound to be difficult. “The process of drafting and passing an infrastructure bill and a pay-for structure that the White House, the Senate, and the House all agree on will likely be drawn out through the summer and into the fall,” Vox’s Ella Nilsen reported.

But for climate advocates, the Biden plan is largely a good sign that the administration is committed to keeping climate solutions at the center of the process.