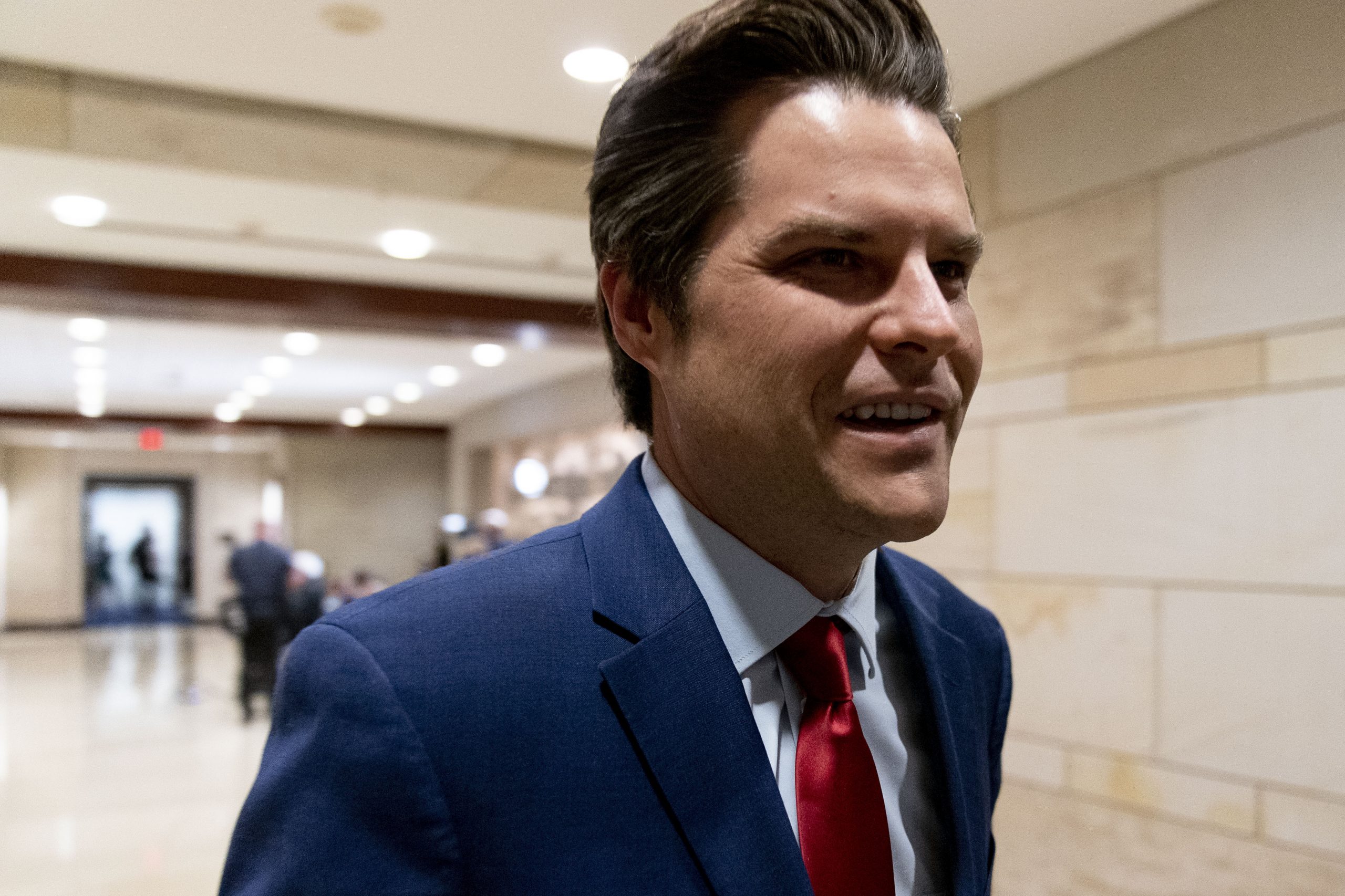 Want the best of VICE News straight to your inbox? Sign up here.

Rep. Matt Gaetz is in a lot of trouble.

That’s because his former wingman, Joel Greenberg, just struck a sweeping agreement to cooperate with federal criminal investigators as part of a guilty plea to serious crimes, including sex-trafficking a minor.

And former prosecutors who reviewed the details of the arrangement said it looks a lot like the investigation is coming for Gaetz.

“Prosecutors would not make a deal like this unless they had bigger fish to fry, and given public reporting, it’s hard to imagine who else Greenberg might be implicating,” said Rebecca Roiphe, a former New York prosecutor and expert on prosecutorial ethics at New York Law School, told VICE News. “It’s not yet certain, but it sure looks like Gaetz is facing a tough legal road ahead.”

Greenberg, the former tax collector of Florida’s Seminole County, pleaded guilty to six criminal charges on Monday morning in an Orlando courtroom, including stealing from the tax collector’s office.

Federal officials are reportedly investigating whether Gaetz and Greenberg paid underage girls for sex, or offered them gifts, according to press reports. They’re also investigating whether Gaetz may have tried to secure government jobs for some of those women, the Associated Press reported on Monday, citing two unnamed people familiar with the probe.

Greenberg now faces extraordinary pressure to cooperate fully with the investigation, under the potential penalty of decades more in prison. His cooperation deal slashed 27 counts from the charges against him, and those could be reinstated if he balks. Now, he’s facing a mandatory 12 years in prison, although that could be shortened if he provides robust assistance.

Greenberg’s plea deal does not mention Gaetz or any other individual, so it remains unclear exactly how prosecutors might seek to use his cooperation. Gaetz has dismissed the investigation against him as groundless, and repeatedly denied ever having sex with a minor or ever paying for sex.

“But what it does mean is that they are trying to build a case against him, and have now secured a major witness against him,” Ohlin said.

Greenberg’s deal is notable, legal experts said, in part because prosecutors don’t like showing leniency to a defendant accused of sex-trafficking a child.

That reticence suggests officials had a strong reason to want his cooperation.

“Prosecutors are generally disinclined to use child sex traffickers for cooperation because their own conduct is so egregious that they don’t want to reduce his punishment,” said Barbara McQuade, the former top federal prosecutor in Detroit and eastern Michigan.

Greenberg admitted Monday to engaging in a commercial sex act with a minor at least seven times, and to giving her ecstasy, after meeting her on a web site that connects “sugar daddies” with “sugar babies.”

In Greenberg’s court documents, Greenberg admitted paying her to have sex with him as well as “other adult men.” He admitted to paying $70,000 for “commercial sex acts” with multiple other women, too, in 150 transactions between 2016 and 2018.

Some details in the plea deal suggest the former 17-year-old at the center of the investigation may already be cooperating with officials. The document states, for example, that when she first met with Greenberg, on his boat, the two did not have sex. Prosecutors might be disinclined to take Greenberg’s word for that detail alone.

The Daily Beast has reported that Greenberg wrote a letter claiming that he and Gaetz paid for sex with multiple women, including one who was 17 years old at the time. Greenberg reportedly gave the letter to former President Trump’s longtime associate and former political advisor, Roger Stone, last year in hopes of securing a pardon, which he did not get.

Prosecutors’ willingness to strike a cooperation agreement with Greenberg indicates that are targeting someone else for serious charges, former prosecutors said.

“Because of these drawbacks, it seems likely that the misconduct that is the topic of Greenberg’s cooperation is significant and more egregious than his own conduct,” McQuade said.

It also suggests that written records exist that could back up Greenberg’s oral testimony. Greenberg’s “despicable” crime makes it harder to put him on the witness stand, said Harry Sandick, a former prosecutor for the Southern District of New York. And that means they would want to make sure that they can also get hard evidence to back up his claims.

“The government would be unwise to build a case like this that depended entirely on the word of an admitted child sex trafficker,” Sandick said.

The lengthy records in Greenberg’s plea deal paperwork suggest that prosecutors are already pretty far down that path, Sandick added.

“The detailed factual allegations in the cooperation agreement’s appendix suggests a robust and mature government investigation, with the prosecutors knowing a great deal about the crime and the activities of co-conspirators,” Sandick said.

If the case ever goes to trial, Gaetz’s legal team might try to use Greenberg’s admissions against him to discredit his claims, or accuse Greenberg of saying what prosecutors want to hear in an attempt to reduce his own prison time.

That’s what happened when Paul Manafort, former President Trump’s onetime campaign chairman, went on trial for tax crimes. Manafort’s legal team attempted to cast him as a blameless and disengaged boss, who simply failed to notice rule-breaking by Rick Gates, Manafort’s former sidekick. Gates entered a guilty plea and took the stand against his former boss.

“Like all cooperators, Greenberg has something to gain and that makes him an unreliable witness and an easy target on cross examination,” said Rebecca Roiphe, a former New York prosecutor and an expert on prosecutorial ethics at New York Law School. “His credibility is especially at issue because he faces a number of criminal charges, including fraud. If he lied in the past what’s to say he’s not lying now.”

And that’s why supplying documents to back up Greenberg’s claims will be so crucial.

“The best solution to that problem is to present corroborating evidence that backs up the testimony, including cell phone records, financial transactions, and other records,” Ohlin said.

Get the latest from VICE News in your inbox. Sign up right here.

By signing up to the VICE newsletter you agree to receive electronic communications from VICE that may sometimes include advertisements or sponsored content.

How Doomed Is Matt Gaetz?