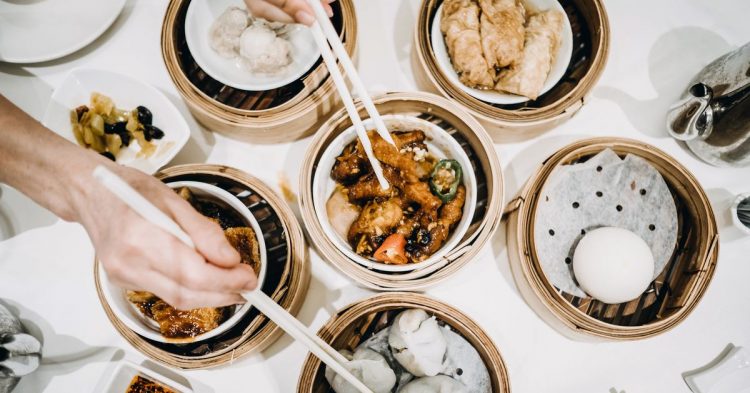 For over a century, American Jews have eaten American Chinese food on Christmas. The annual feast is a holiday tradition that is likely to go on as usual this year, even in the midst of COVID-19 — albeit in the form of delivery or takeout. This pastime has evolved to a near-holy tradition, parodied on Saturday Night Live, analyzed in academic papers, and reaffirmed by Supreme Court Justice Elena Kagan.

Perhaps the foremost expert on the practice is Rabbi Joshua Eli Plaut, PhD, executive director of American Friends of Rabin Medical Center, rabbi of Metropolitan Synagogue in New York, and author of A Kosher Christmas, the premier (and only?) comprehensive study of what Jews do at Christmastime.

I spoke to Plaut about Chinese food on Christmas, and why he used to sit on Santa Claus’s lap.

Both Jews and Christmas have existed for a while. When did Jews first ask, “What should we do on Christmas?”
It has been a question for as long as Christmas has existed, because Jews have always felt like outsiders. But how they felt specifically was really a function of their status in society. In Eastern Europe, for instance, Jews were not very assimilated. Christmas was a night of possible pogroms and violence, with so many celebrants, often drunk, going from house to house. Jews did not go to the synagogue to study. They stayed at home for physical safety reasons. If they did anything, they might play cards or chess.

In Western Europe, after the French Revolution, Jews were more assimilated. There, they had more freedom to wonder, “Do I bring a Christmas tree into my home? Do I have a holiday meal? Do I give out gifts?” The early Zionist Theodor Herzl was a secular Jew, and he had a Christmas tree in his salon. After the Chief Rabbi of Vienna came to visit, he wrote something in his diary like, ”I hope the Rabbi doesn’t think less of me because of this. Then again, what do I care what he thinks?”

Okay, so tell me when eating Chinese food on Christmas first comes into the picture. Is that a Jewish-American tradition?
Yes. It begins at the end of the 19th century, on the Lower East Side, where Jewish and Chinese immigrants lived in close proximity. The very first mention of American Jews eating in a Chinese restaurant dates to 1899, when the American Hebrew journal criticized Jews for eating at non-kosher restaurants. By 1936, a publication called the East Side Chamber News reported at least 18 Chinese tea gardens and chop suey eateries in heavily-populated Jewish neighborhoods. All of these were within close walking distance of Ratner’s, which was then the most famous Jewish dairy restaurant in Manhattan.

Jews would go out for Chinese food on Sundays, when they felt left out of church lunch. It was a gradual transition from the traditional diet of Eastern Europe, to eating American Chinese food, to eating other pan-Asian cuisines, like Indian food. I like to say that, within a hundred years of arriving in New York, the average Jew was more familiar with sushi than gefilte fish.

In the last 35 years, Chinese restaurants on Christmas have really become this sort of temporary community where Jews in the United States can gather to be with friends and family. It’s a secular way to celebrate Christmas, but it’s also a time to shut out Christmas and announce your Jewish identity in a safe environment.

Within a hundred years of arriving in New York, the average Jew was more familiar with sushi than gefilte fish

In Chinese-American cooking, if there is any pork [which is not a kosher food], it is usually concealed inside something, like a wonton. A lot of Jews back then — and even now — kept strict kosher inside the home but were more flexible with foods they ate at restaurants. Sociologist Gaye Tuchman wrote about this practice. She described [the plausible deniability of non-kosher ingredients] as safe treyf. [Treyf is the Yiddish word for non-kosher.] A lot of Jews considered the pork in Chinese food to be safe treyf, because they couldn’t see it. That made it easier to eat.

In your research for this book, did you come across anything about Chinese food and Christmas written from a Chinese-American perspective?
I actually found a citation from 1935, in the New York Times, about a restaurant owner named Eng Shee Chuck who brought chow mein to the Jewish Children’s Home on Christmas Day. If you were to interview Chinese restaurant owners, they’d tell you that Christmas is their biggest day of the year, outside of probably the Chinese New Year. If you want a more thorough understanding, though, you should probably go talk to some restaurant owners in Chinatown.

Sometimes my family eats Chinese food on Christmas, but we always go to the movies. When did that become an established Jewish Christmas tradition?
When Jews began to settle on the Lower East Side of Manhattan between the 1880s and the 1920s, they were poor immigrants. They worked in sweatshops and lived in tenement housing. In their time off, they would go to the newly opened nickelodeons. For between one cent and five cents, they could see a very early form of a movie. By 1909, there were 42 nickelodeons adjacent to the Lower East Side and 10 uptown in Jewish Harlem. Christmas was just another day off, so these early movies attracted big crowds.

We know from the Yiddish press that Christmas became a popular day for the opening of new Yiddish theater productions. It was a day off from work, so what do you do? You can stay home, or you can go to the nickelodeons, or the Yiddish theater. Eventually, decades later, you could go have a meal in a Chinese restaurant.

What do you usually do on Christmas?
For many years I was researching this book. This year, I’ll be with my family in a small town, where there are no real restaurants open. We will probably play a board game or watch Netflix.

What did you do on Christmas growing up?
I never went to Chinese restaurants. We’d go skating in front of the Rockefeller Center Christmas tree, and then we’d have hot chocolate with marshmallows. I have great memories of Christmas. My mother would take me to sit on Santa Claus’s lap. When I was writing this book, I asked her, “Why did you take me — the son of a rabbi! — to sit on Santa Claus’s lap?” She said, “Everybody in America does it, so why shouldn’t we?” She knew I was secure in my Jewish identity.