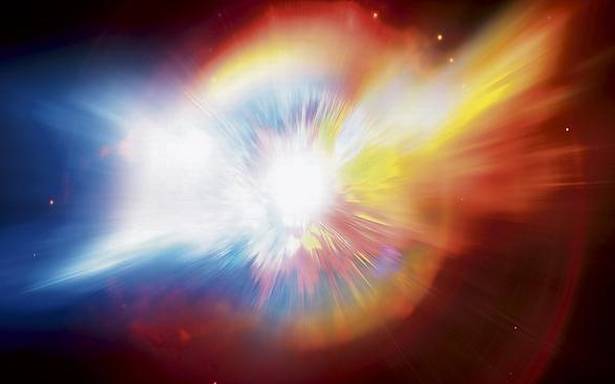 Many stars, towards the end of their lifetimes, form supernovas – massive explosions that send their outer layers shooting into the surrounding space. Most of the energy of the supernova is carried away by neutrinos – tiny particles with no charge and which interact weakly with matter. Researching the mechanisms of the so called Type II supernovas, a team from IIT Guwahati has come up with new insights into the part played by neutrinos in this dramatic death of massive stars. The collaboration includes astrophysicists from Max Planck Institute, Munich, Germany; Northwestern University, Illinois and University of California, Berkeley, in the U.S.

Fate of the star

All stars burn nuclear fuel in their cores to produce energy. The heat generates internal pressure which pushes outwards and prevents the star from collapsing inward due to the action of gravity on its own mass. But when the star ages and runs out of fuel to burn, it starts to cool inside. This causes a lowering of its internal pressure and therefore the force of gravity wins; the star starts to collapse inwards. This builds up shock waves because it happens very suddenly, and the shock wave sends the outer material of the star flying. This is what is perceived as a supernova. This happens in very massive stars.

In stars that are more than eight times as massive as the Sun, the supernova is accompanied by a collapsing of the inner material of the dying star – this is also known as core collapse supernova or Type II supernova. The collapsing core may form a black hole or a neutron star, according as its mass. “Our work is on these core-collapse events of type II supernova,” says Sovan Chakraborty of the physics department of IIT Guwahati, in an email to The Hindu.

Models of this process, dubbed the effective two-flavour models, have only taken into account the asymmetry between electron neutrino and the corresponding antineutrino. In a paper published in Physical Review Letters, the researchers from IIT Guwahati claim that a three-flavour model is needed to predict well the dynamics of the supernova.

The fast oscillations are important because the researchers find that these can decide the flavour information of the supernova neutrinos.

So far, this has not been done, and models have only kept terms involving a neutrino and its corresponding anti-neutrino. “We find that fast nonlinear oscillations of neutrinos are sensitive to three flavours, and neglecting the third flavour may yield the wrong answer,” says Dr. Chakraborty. “Thus, the presence of …[asymmetry between] the muon neutrinos and antineutrinos will be crucial for the neutrino oscillations, in turn influencing the supernova mechanism.”

Understanding this is important when one wants to measure the influence of neutrinos and their oscillations on supernova mechanism and heavy element synthesis in stellar environments.

Back to Top
Close Add post
X
CDC—No Longer Constrained By Trump—Issues Order That Makes Not Wearing A Mask On Public Transportati…ScienceTopline The Centers for Disease Control and Prevention, no longer restricted by the Trump administration, issued an extensive federal public health or…

How neutrinos aid in the death of massive stars

X
Saturn’s tilting axisScienceWhat caused the tilt to Saturn’s rotation axis?The tilt of the rotation axis of the gas giant Saturn may in fact be caused by its moons, scientists fr…
close