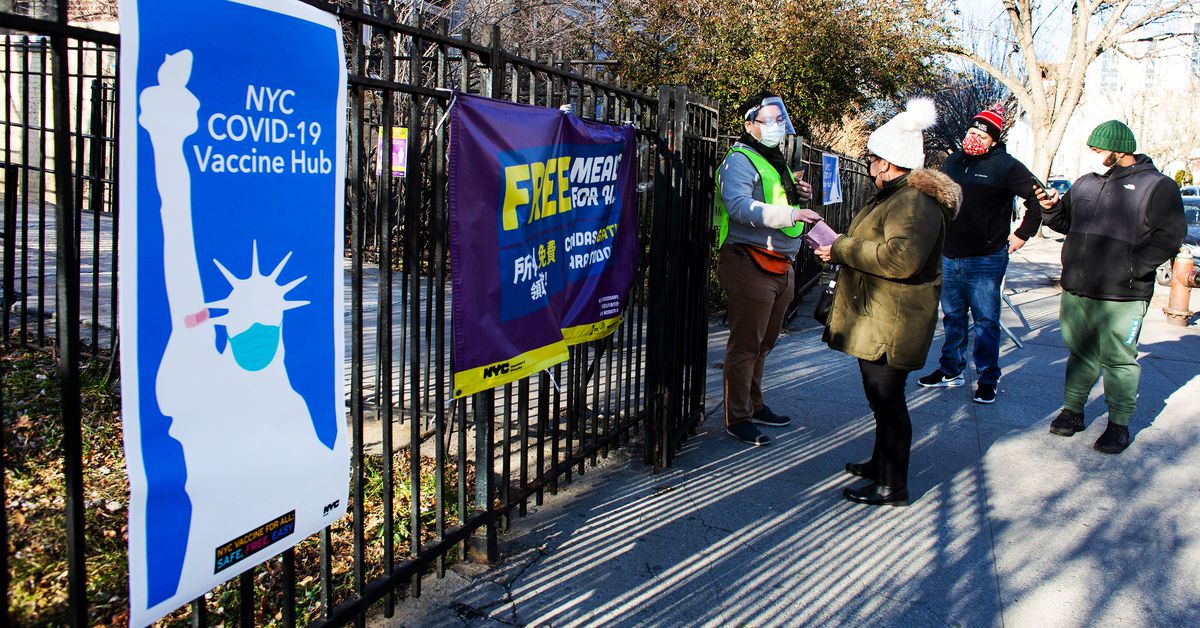 Since December, a handful of fortunate end-of-day shoppers have received coveted doses of the coronavirus vaccine by simply being in the right place at the right time. That place, during a pandemic, could be a Safeway or a Walgreens. Some of these recipients are young and healthy adults, and have likened their surprise immunization to winning the lottery.

As the country embarks on a decentralized Covid-19 vaccine rollout program, grocery stores and pharmacies are at the forefront of inoculating local residents and, in some cases, issuing leftover doses to whoever might be available. Some social media users have joked about hanging around pharmacies near closing time in the hope of receiving a leftover vaccine dose, instead of allowing it to go to waste.

Los Angeles County, for example, has no official standby line for the coronavirus vaccine, but hundreds of “vaccine chasers” — young people, entire families, and even seniors unable to secure an appointment — have flocked to sites countywide in the hopes of receiving an expiring shot.

State and local jurisdictions are being recommended by the Centers for Disease Control and Prevention to issue their first vaccine doses to health care personnel, residents of long-term care facilities, and, more recently, adults over 65 and anyone with underlying medical conditions. These are only recommendations, though. Governors and individual vaccination sites are in charge of implementing their own vaccine prioritization plans. As coronavirus cases rise, state officials are amending their vaccine guidelines to include a larger population of people.

The US is lagging behind its projected vaccination goal of 20 million people by the end of 2020; only about 9 million people have received the vaccine’s first dose as of January 11. The two available vaccines, made by Moderna and Pfizer/BioNTech, have to be injected within hours after the doses are thawed from subzero storage temperatures, which complicates their distribution. Health and state officials have begun urging medical providers to consider vaccinating lower-priority groups to minimize vaccine wastage. As a result of these logistical hiccups, a small group of healthy, low-priority people has been administered the vaccine as a measure of last resort.

Group of people I know got vaccinated because they were at the right place at the right time with many doses set to expire & be tossed.

A number of these random immunizations (that have been publicly documented, at least) have occurred in Washington, DC, where local health officials have encouraged pharmacists to adopt a zero-waste policy. A DC-based law student posted a viral TikTok of his Moderna shot, which he was offered while grocery shopping at a Giant Food. A DC-based reporter was inoculated at Safeway after hearing an in-store announcement that its pharmacy had extra doses left. A DC couple was able to get on a Safeway pharmacy waitlist to receive end-of-day vaccines for when priority patients fail to show up for one.

There have been a few instances reported elsewhere as well: A Louisville couple made news for receiving a Christmas Eve vaccine at a local Walgreens. “[A friend] called us, and we ran right up. It was pure luck,” the recipient told the Courier Journal. The pharmacy later said it sought to prioritize its excess doses to first responders, Walgreens staff, and senior residents as the news garnered attention.

Sudden time-sensitive incidents such as a malfunctioning hospital freezer in Ukiah, California, have forced providers to make rapid distribution decisions with little forethought. But there are also instances of those looking to jump the line if providers are disorganized. The Los Angeles Times reported that at one South LA vaccination site in early January, about 100 people received vaccines without being asked to show proof that they worked in the health care industry.

These stories of circumstantial — even chaotic — vaccinations might provide a semblance of hope for those who fall further down the priority list. According to Business Insider, pharmacies and grocery stores in the DC metro area are already fielding “tons of calls” from interested recipients eager to get on a vaccine waitlist. These last-minute lists in DC, however, have quickly filled up via word of mouth. A pharmacy manager in Pennsylvania told the local Fox News station that it only takes names of those eligible under the state’s 1A categorization, which includes health care workers and residents of long-term care facilities, for its “do not waste” list. (The Food and Drug Administration and the federal government have yet to issue guidelines on who these extra doses should go to.)

These waitlists and random occurrences aren’t necessarily cause for optimism, though, especially as the vaccination timeline for most Americans remains unclear and varies from state to state.

“There has been outsized media and social media attention to the number of people this has happened to,” Josh Michaud, associate director for global health policy of the Kaiser Family Foundation, told Vox. “It’s a good approach to not waste vaccine doses at the end of the day … but in the grand scheme of things, it’s going to be a marginal contribution to vaccinations. The bulk of vaccinations being done at pharmacies are for those who fit into the prioritization groups and made appointments.”

It’s possible that vaccine providers might no longer need to resort to waitlists or last-minute immunizations, Michaud said, since the federal government has revised their vaccine recommendations: “We’re seeing more states moving in that direction, so the phenomenon of finding a random person might become less common, simply because there will be more people who fit into those higher-priority categories.”

The public desperation for a last-minute shot signifies a top-down failure of the federal government: Officials have largely ignored expert warnings of the potential for logistical hindrances, and there is no cohesive communication campaign to inform Americans when they’re available for a shot. Even as providers do their best to minimize vaccine waste, the disorganized rollout makes it harder for higher-risk Americans to receive the first vaccine dose. This approach “undercut[s] the needs-based approach to those who are savvy and to those who realize what’s going on,” Arthur Caplan of the Division of Medical Ethics at New York University told Business Insider.

The US population has a long way to go to reach herd immunity — which may require 70-85 percent of the population vaccinated — in order for normal life to resume. Officials have maintained that the more people who get vaccinated, the better, and so the general interest toward these random store vaccinations is a good thing. But most members of the public won’t be able to skip the wait, unlike the lucky few on social media, no matter how often they stop by their local pharmacy.

An informed electorate is essential to a functioning democracy. Vox aims to provide clear, concise information that helps people understand the the issues and policy that affects their lives — and it’s never been more vital than today. But our distinctive explanatory journalism is expensive. Support from our readers helps us keep our work free for everyone. If you have already made a financial contribution to Vox, thank you. If not, please consider making a contribution today from as little as $3.

How random people have managed to get leftover coronavirus vaccines

X
News Analysis: Trump’s impeachment gave Republicans a chance to choose principle…WorldSoon after the Sept. 11 attack, in the hollow-eyed hours that followed, there was a shining moment on the steps of the U.S. Capitol, when members of C…
close