Home General How scarce will coronavirus vaccines be in the US?

How scarce will coronavirus vaccines be in the US? 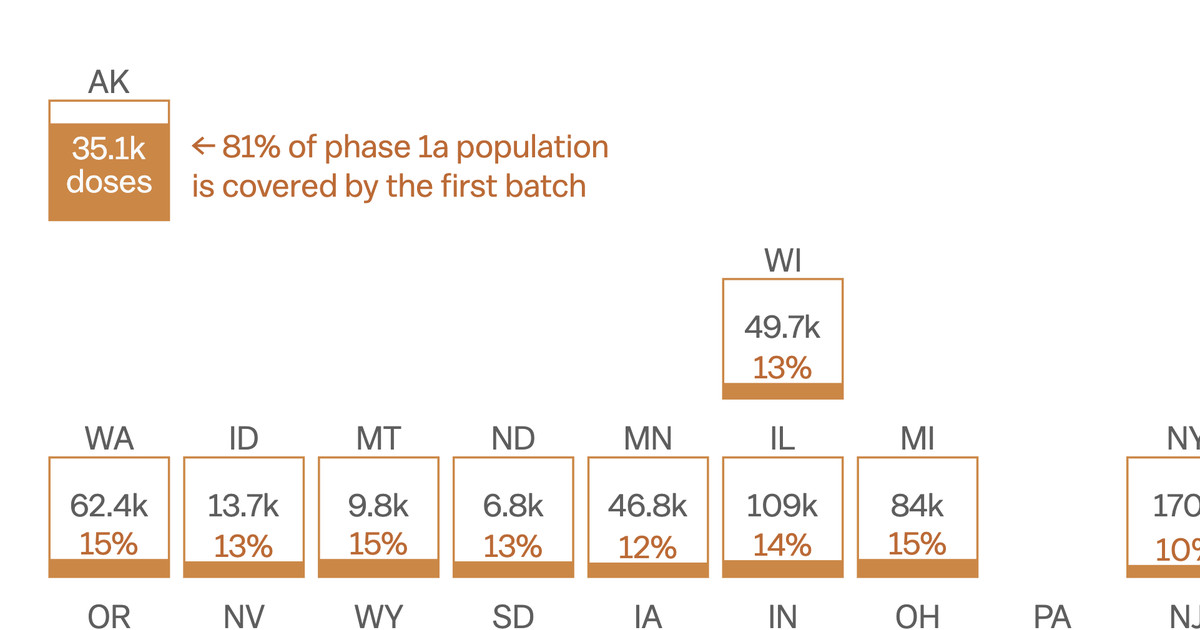 With a record number of Americans dying of Covid-19 every day, immunizing the public against the virus is more urgent than ever. But hundreds of millions of people in the US are simply going to have to wait — probably several months — to get a vaccine.

Instead of the 300 million doses the Trump administration originally promised before the end of the year, the two vaccine developers first in line for Food and Drug Administration approval — Pfizer/BioNTech and Moderna — are expected to ship 35 million to 40 million doses total before January. Since both vaccines are supposed to be dispensed at two shots per person, that’s enough supply for no more than 20 million people.

But even reaching that many people will take some time. The first batch of the Pfizer/BioNTech vaccine shipped from a Kalamazoo, Michigan, factory Sunday, following the FDA’s emergency use authorization Friday night, and will include only 2.9 million doses. (A scientific committee that advises the FDA will consider whether to recommend authorization of emergency use of Moderna’s vaccine on December 17.)

The vaccine developers say efforts to meet their initial year-end targets are being hampered by shortages of raw ingredients. And while both Moderna and Pfizer/BioNTech have vowed to ramp up production next year, the exact amount they’ll make still isn’t clear and the estimates keep shifting. Moderna currently says it’ll have 85 million to 100 million doses for the US ready in the first quarter of 2021; Pfizer plans to provide 50 million doses at the end of the second quarter and another 50 million in Q3, according to the Washington Post.

It’s not just Pfizer/BioNTech and Moderna that are falling short of their original targets: AstraZeneca and Oxford — another Covid-19 vaccine team that was supposed to deliver up to 300 million doses, or 60 percent of the US coronavirus vaccine supply — have been beset by safety and transparency problems that caused them to fall weeks behind on finishing their phase 3 US trial.

To be clear, the effort to identify, test, and manufacture a Covid-19 vaccine has unfolded at remarkable speed. By the middle of next year, we may have several effective vaccines to choose from. But while the vaccines offer hope for the end of the pandemic, they are far from a quick fix. For the foreseeable future, doses will be scarce — not even enough to cover the highest-risk groups, like health workers and long-term care residents. The federal government’s allocation strategy also means some states (such as Wyoming) will have more supplies for top-priority groups than others (like New York). This scarcity is forcing local health officials and administrators across the country to make ethically fraught decisions about which lives most urgently need protecting from Covid-19.

Who is likely to go first?

The effort to figure out who should get immunized first ultimately falls to the states, but they are getting advice from the federal government, which has better information on the safety and efficacy of the vaccines and decides how many doses states will get.

The Advisory Committee on Immunization Practices, an expert group that makes recommendations on vaccination policy to the US Centers for Disease Control and Prevention, put health personnel, along with staff and residents of long-term care facilities, at the front (phase 1a). In addition, two other influential health bodies have weighed in on the question of the highest-priority groups: The World Health Organization (WHO) and the National Academies of Sciences, Engineering, and Medicine (NASEM) also put health workers first, and, in the case of NASEM, first responders too. Again, though, local health authorities have the power to decide whom to prioritize (though ACIP is likely to have the most influence on US vaccine rationing decisions).

“Because all [ACIP] can do is make recommendations, those recommendations are going to be implemented in vastly different ways across the country,” said Lawrence Gostin, director of the O’Neill Institute for National and Global Health Law at Georgetown University. “And those [differences] have to do with whether you’re a red state or blue state, a mayor or governor.”

The initial shipment from Pfizer will cover only 12 percent of the people in ACIP’s phase 1a (again, health workers and staff and residents of long-term care homes), or 0.9 percent of the country’s adult population.

This means “states are going to need to make sub-prioritization decisions because the supply won’t cover the plan ACIP is proposing,” said Ruth Faden, the founder of the Johns Hopkins Berman Institute of Bioethics.

Most states have reported their estimates for expected doses in the first shipment, according to the state reports collected by Vox.

How many health workers and those in long-term care facilities will be covered by the first shipment of the vaccines?

The first batch of 2.9 million Pfizer/Biotech vaccines only cover a fraction of the 24 million health care workers and people in long-term care facilities across the country, the groups in phase 1a. The first order covers an average of 12 percent of this population across the nation. Some states would be able to immunize more, others fewer.

So far, it looks like some states with a higher share of health workers and long-term care home residents are going to be especially short on vaccine supplies. For example, places like Washington, DC, New York, and Ohio — where the population of those in phase 1a is over 10 percent of the state’s adult population, compared to the national average of around 7.5 percent — will be at a disadvantage. DC will only receive vaccines to cover about one-tenth of the health workforce, which is why officials there are petitioning the federal government not to tie the share of vaccines to its population.

On the other end of the spectrum, Oregon’s governor told the public that the first doses are “enough to provide vaccines to health workers — nurses, doctors and other support staff” — before the end of December. Alaska’s 35,100 doses, meanwhile, will cover 81 percent of its health workers and care home residents, about 5 percent of the state’s population. This is because it’s getting its total order for the month in one shipment to minimize logistical challenges in the sprawling state.

So distributing the vaccines by the state’s adult population means a young, healthy adult might be able to get vaccinated in some parts of the country sooner than others if the state has a relatively small high-risk population, including lower numbers of health workers.

States submitted their initial distribution plans to the CDC months ago under the assumption that 300 million vaccine doses would be available by the end of the year. Now, faced with a much more limited supply, those plans are evolving, and as of Friday, many states still didn’t know for sure how many doses they were going to get this year.

Still, there are a few things we can expect. Across the country, once phase 1a is complete, states will continue moving through their priority groups. And this is where things get murkier and local health authorities may diverge significantly in their distribution plans.

In phase 1b, the WHO prioritizes older adults, while NASEM puts people of all ages with comorbidities and older adults living in congregate or crowded settings, such as nursing homes, next. ACIP has finalized its advice only for phase 1a, but the committee has already signaled it will focus on essential workers for phase 1b, only reaching seniors and people with comorbidities in phase 1c.

In placing seniors and people with comorbidities ahead of essential workers, the WHO and NASEM are putting the greatest value on preventing deaths (since these groups are at the highest risk of Covid-19 death). If ACIP goes ahead with its draft plans, it would be “trading off infections averted with deaths averted,” said Saad Omer, director at the Yale Institute for Global Health. For states, these rationing decisions will be even trickier if supply shortages persist, especially in areas with large groups of front-line workers and long-term care populations that need to go first.

So even with an effective vaccine already being rolled out, there’s still a long battle ahead. That’s why Operation Warp Speed’s chief operating officer, Gustave Perna, compared America’s mass inoculation effort to D-Day, the military operation that culminated in the end of the Second World War.

“D-Day was the beginning of the end,” Perna said in a press briefing. “And that’s where we are today.”