How the pandemic brought a rising tide of hunger to Europe 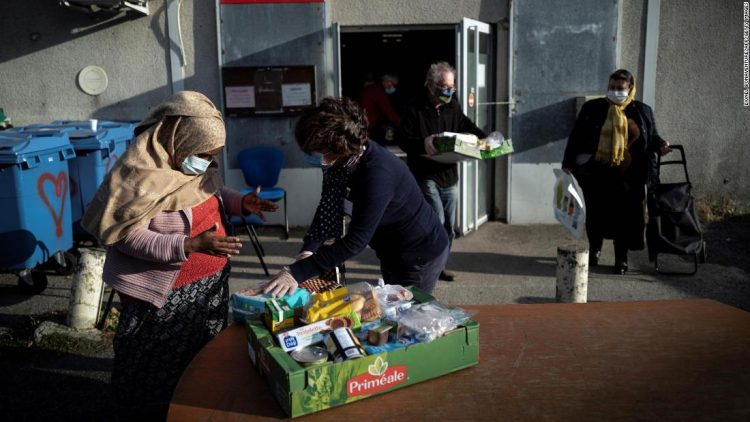 She struggled with mental health issues after fleeing an abusive relationship, moving herself and her children into an east London flat with nothing more than the clothes on their backs.

For the past few years, Patricia held down a job as a barista, but she was furloughed after the Covid-19 crisis exploded and the United Kingdom went into lockdown. As the money got tighter, she found herself resorting to a food bank to help feed her family.

“You feel like you’re going through it by yourself with your kids, and it’s hard to explain to them what you’re facing at the time when they just want to eat — they don’t really understand food poverty,” said Patricia, who we are only identifying by her first name to protect her identity.

“[Without help] I don’t even know how to describe it, I probably would have just been in a corner,” she told CNN. “Mentally, it would’ve just took me to another place.”

Like many others in the east London borough of Tower Hamlets — one of the most deprived areas in the British capital — Patricia turned to the First Love Foundation.

The charity — which gives out food to those in need on top of providing other services including housing and legal assistance — said it saw a 925% surge in demand during the early stages of the pandemic.

“When we saw Covid coming, that was a game-changer for us,” said Denise Bentley, founder of the First Love Foundation.

Bentley says the pandemic only added to the food insecurity already felt by many in the UK, especially in Tower Hamlets. “There’s this heaviness in the community, a heavy feeling of ‘this is just the way it is; we’re overlooked, this is my lot, this is the rest of my life’… it’s sad,” she told CNN.

The pandemic has only widened the ever-growing divide between the haves and have-nots.

In July, UN Secretary-General António Guterres said the virus had “laid bare” risks and inequalities known for decades, and warned that “entire regions that were making progress on eradicating poverty and narrowing inequality have been set back years, in a matter of months.”
But even in Europe — home to some of the richest countries and most generous social safety nets — concerns around hunger and deprivation existed long before the Covid-19 crisis.
In 2019, a report by Eurostat estimated that there were 92.4 million people in the EU who were at risk of poverty or social exclusion, equivalent to 21.1 % of the total population.
Another Eurostat report from 2018 revealed that 33.4 million Europeans were unable to afford a meal with meat, fish, or a vegetarian equivalent every second day — highlighting the sheer scale of the problem across Europe.

And when the pandemic hit, things got even worse.

More and more people in Europe’s biggest cities began to fall into food poverty and rely on food banks for help — increasing demand on an already overstretched network of largely voluntary organizations.

The Trussell Trust, Britain’s biggest food bank network, said they experienced a 47% increase in need during the early stages of the pandemic, and for the first time in its 70-year history, UNICEF announced it would feed hungry children in the UK amid the growing number of kids at risk.

More widely, the European Food Banks Federation (FEBA) reported a food demand increase of around 30% across their European network of 430 food banks — with a range of 6% to 90% in different countries — in comparison to pre-Covid times.

Jacques Vandenschrik, president of FEBA, says that although EU nations are often seen as being the gold standard for welfare programs, food banks are having to fill in the gaps left by individual governments — including smaller nations previously under authoritarian regimes.

“We do a job that in a communist or socialist country did not exist, because there was no need for a food bank, because the state would provide everything,” said Vandenschrik. “[Food banks] would like to disappear, they would like a situation where nobody requires food aid, where food insecurity has disappeared,” he added.

The stark reality is that many people across Europe are just a couple of missed paychecks, or a traumatic life event, away from potentially needing assistance from a food bank.

“It can happen to anyone,” said Patrice Blanc, president of French foodbank Restos du Cœur.

Blanc said a “tide” of hunger caused by the pandemic led to a 40% rise in food bank demand across France this year. The northern suburbs of Paris have been particularly affected, Blanc said, with hundreds of people queuing round corners of food banks every day.

“It’s not them that should be shamed, but society that should be ashamed,” said Blanc, adding that societal stigmas around food bank usage may be stopping people from reaping the other benefits they bring.

“Many of the people who are threatened or affected by poverty also have the issue of loneliness and psychological stress on their mind,” he said. “We have been pointing out to politicians and society for many years that it is not the task of Tafel to eliminate poverty, but it is our task, or so we see it, to support people.”

Brühl said that better welfare measures coupled with governmental action could be a way out for many who are struggling.

“The task of politics and society must be to put the topic of poverty more on the agenda, and through Covid, it’s all focused again in a burning glass.”