Home General How to Pretend You’re in Quebec City Tonight

How to Pretend You’re in Quebec City Tonight 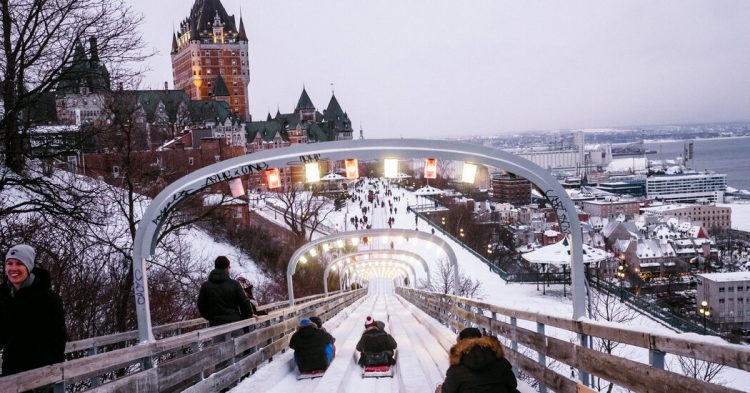 While your travel plans may be on hold, you can pretend you’re somewhere new for the night. Around the World at Home invites you to channel the spirit of a new place each week with recommendations on how to explore the culture, all from the comfort of your home.

When the snow falls and the wind howls, the people of Quebec City don’t hibernate. Rather, they bundle up and celebrate with one of the most picturesque winter carnivals in the world. Overlooking the St. Lawrence River, with cobblestone streets and quaint stone houses, Old Quebec looks like an enchanted snow globe village — especially at Christmastime. In fact, the historic district of this former French colony is a UNESCO World Heritage site, thanks in part to it being the only city in North America to have preserved its ramparts.

If I were there I’d be taking in sweeping river views from the promenade known as Dufferin Terrace and the Fairmont le Château Frontenac, the castlelike hotel where Alfred Hitchcock filmed scenes for “I Confess.” In the evening, I’d stroll amid evergreens and twinkling string lights on the Rue Petit-Champlain and stop into Notre-Dame-des-Victoires, one of the oldest stone churches in North America. Hours would be spent ice skating, warming up at an outdoor fire pit and refueling with hearty fare like poutine and tourtière (meat pie) from beloved restaurants.

But as the song goes, there’s no place like home for the holidays. Wherever you happen to be, you can embrace the coziness of the season like Québécois do — with maple syrup-inspired recipes, craft beer, outdoor pursuits and good cheer — even if a single snowflake never falls.

Cook up comfort with meat and maple syrup

“Blast some cheesy Celine Dion song on your iPhone at earsplitting decibels, find a good recipe for poutine — that trouser-busting dish of French fries, Cheddar cheese curds and gravy — and, if you are in chillier climes, go outside and build a snowman,” advises Dan Bilefsky, the Canada correspondent for The Times. Born in Quebec, Mr. Bilefsky has written about the “cultural skirmish over who deserves credit” for poutine: Québécois — or the rest of Canada. Happily, all you have to decide is which poutine recipe to make. Try one from Saveur, CBC/Radio-Canada, or Chuck Hughes, the co-owner and executive chef of Montreal’s Garde Manger and Le Bremner.

Host your own winter carnival

Take part in some typical Quebec Winter Carnival activities from your hometown (though perhaps skip the local tradition of ax-throwing). Make snow sculptures and go sledding or snowshoeing. Not living in a winter wonderland? You can string up white fairy lights, sing “Au Royaume du Bonhomme Hiver” with Renée Martel (to the tune of “Winter Wonderland”), and savor the Carnival grog, a hot, usually alcoholic drink. A recipe to make some at home with maple syrup, cranberry juice, cinnamon, cloves and sweet grass is on the Quebec Winter Carnival website.

On days it’s too cold to linger outdoors, learn or brush up on your French, the official language of government in Quebec (and a delicate subject in a majority French-speaking province surrounded by English speakers). Stick to your budget with “Want to Learn French? Italian? Russian? There’s No Time Like the Present” for language tools that are free or won’t break the bank.

Get cozy with a stack of detective novels

What better way to spend long winter nights than with intrigue and mystery set in a small Quebec hamlet? Light a fire, real or virtual, crack open one of Louise Penny’s best-selling detective novels and spend the evening with Chief Inspector Armand Gamache of the Sûreté du Québec police force. In the most recent book, “All the Devils Are Here,” published this fall, the inspector heads to Paris. But the 15 books in the Gamache series that precede it are steeped in the culture and cuisine of Quebec (with the occasional murder), beginning with “Still Life.”

Keep au courant with Canada’s Top Ten, the Toronto International Film Festival’s annual list of the country’s best films (10 features and 10 shorts). The 2019 selections include several from Quebec directors such as Louise Archambault, whose “And the Birds Rained Down” (“Il Pleuvait des Oiseaux”) is about older hermits living in the wild and a love that blossoms there; and Sophie Deraspe’s “Antigone,” a riff on Sophocles’ tragedy centered on an immigrant family in Montreal (it won best Canadian feature at the Toronto International Film Festival). Also on the list is “Matthias and Maxime” from the writer and director Xavier Dolan, the Cannes Film Festival regular who shared the Jury Prize in 2014 for his film “Mommy” with the French filmmaker Jean-Luc Godard. (The 2020 list was recently posted online.)

Sing along with Celine Dion

For a road trip across Quebec in 2018, Mr. Bilefsky, the Times correspondent, made a playlist of songs that he felt embodied Québécois identity and would also provide an atmospheric soundtrack to the province’s landscapes. There was music from Samian, an Indigenous rapper who sings in French and Algonquin; Leonard Cohen; Éric Lapointe; Les Cowboys Fringants; the Dead Obies; and Arcade Fire. Obviously, Celine Dion, born in Charlemagne, Quebec, was on the list with “Destin.” After all, you haven’t really sung Celine until you’ve done so in French.

How are you going to channel the spirit of Quebec City in your home? Share your ideas in the comments.

Stephanie Rosenbloom, the author of “Alone Time: Four Seasons, Four Cities, and the Pleasures of Solitude” (Viking), has been writing travel, business and styles features for The Times for nearly two decades. Twitter: @Stephronyt. Instagram: @StephanieRosenbloom