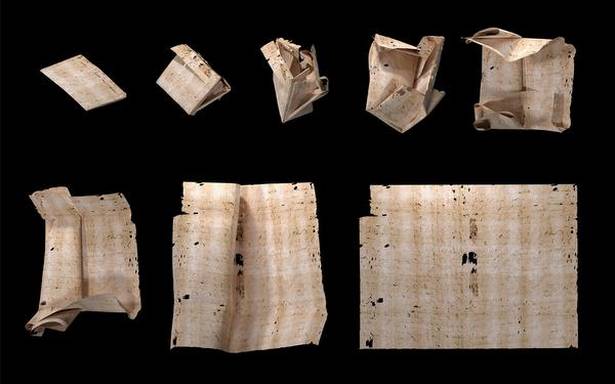 In 1926, a seventeenth-century trunk containing over 2000 unclaimed letters was bequeathed to the Dutch postal museum. The letters were closed using an ancient technique called letterlocking, in which the writing paper is intricately folded and secured to become its own envelopes. Now an international team of researchers has virtually unfolded and unlocked the contents of one of the letters and the findings were published on Tuesday in Nature Communications.

The team used a technique called X-ray microtomography. “The scanning technology is similar to medical CT scanners, but using much more intense X-rays which allow us to see the minute traces of metal in the ink used to write these letters,” explains one of the authors Dr. David Mills from the Queen Mary University of London in a release.

The team developed algorithms to virtually separate the different layers of the complicated folds in the letters.

In a world first, a team of researchers have read an unopened letter from Renaissance Europe – without breaking its seal or damaging it in any way. The highly sensitive X-ray microtomography scanner was developed at Queen Mary’s dental research labs.

“We were not interested in working on the project if the endgame was to tear open the unopened letters. The unopened letterpackets preserve invaluable letterlocking evidence,” explains lead author Jana Dambrogio in an email to The Hindu. She is from the Wunsch Conservation Laboratory, Massachusetts Institute of Technology (MIT) Libraries, Cambridge, and has been studying the intricate details of letters for twenty years.

The study revealed that the letter, dated July 31, 1697, was written in French by a legal professional named Jacques Sennacques, from Lille (a city in northern France), who requires a “legalised” death certificate for a relation, Daniel Le Pers.

“Jacques doesn’t say why he needs this document, but it’s clearly an urgent request as he reminds Pierre that he’s asked for it before. The letter is important because it shows that family members were able to communicate across borders thanks to an efficient postal system. It also sheds light on the worries of ordinary people – most letters we have are by the elites, but this mundane letter reveals the more day-to-day business of people at the time.” says one of the authors David van der Linden, from Radboud University (The Netherlands), in an email to The Hindu.

“This is a great example of the everyday business of a lawyer more than 300 years ago. The people whose lives are recorded in the trunk were ordinary people in extraordinary circumstances – often separated from their friends, families, and patrons for reasons of religious persecution, or simply the enduring need to make money. These letters poignantly capture their attempts to maintain vital human connections across vast and sometimes dangerous distances,” adds Dr. Jana Dambrogio.

A seventeenth-century trunk of letters bequeathed to the Dutch postal museum in The Hague. The trunk belonged to one of the most active postmaster and postmistress of the day, Simon and Marie de Brienne, a couple at the heart of European communication networks. Courtesy of the Sound and Vision The Hague, The Netherlands. The trunk is part of the Brienne Collection.

The studied letter required at least eight folding and locking steps to transform the flat sheet of paper into a compact letterpacket. Dr. Dambrogio explains that there are hundreds of folding sequences in the collection and the virtual unfolding pipeline has helped study them

She says that the team is also interested in using this X-ray technique to study origami. “A challenge in origami is to accurately measure folded objects so that we can better understand if they truly ‘exist’ from a mathematical standpoint – if they can be folded without stretching the paper in any way. Another area of interest is to study important origami works whose designers have long since passed away and we have no record of how they were constructed,” she adds.

RELATED:  Blue Origin Launches And Lands Its First Space Tourism Rocket Of The Year, With Human Flights In Sight