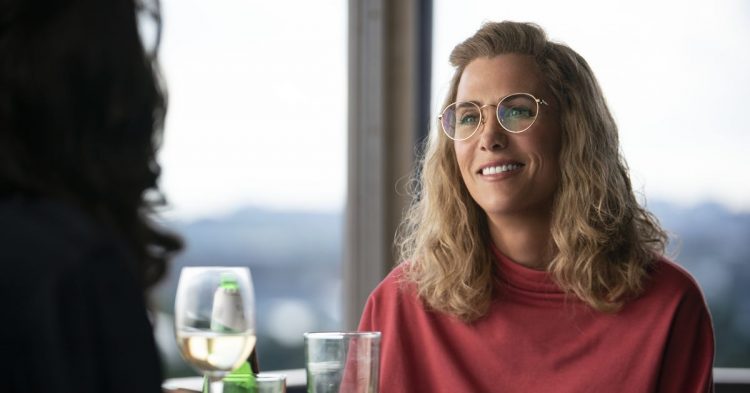 Wonder Woman 1984 swings for the fences in its 150 minutes of runtime. The movie, the second in DC’s latest franchise, is both a return of Gal Gadot’s Diana Prince and a wistful look at how lonely her life is. Chris Pine’s Steve Trevor is back too, despite his fate at the end of the first film; his comeback plunges the movie into a romantic reunion, unrequited love territory. At the same time, Pedro Pascal’s dastardly oil tycoon Maxwell Lord is descending into insatiable madness and succumbing to his thirst for power, while also dragging the US, entrenched in the Cold War, into all-out nuclear warfare.

What we end up with is part-romance, part-’80s period piece, and part-clunky global political commentary. Oh, and it’s also a superhero movie.

But in its attempt to be all these things at once, WW84 does a disservice to what could have been its greatest asset: Kristen Wiig’s devious performance as Barbara Minerva, a.k.a. Cheetah.

The iconic comic book villain gets some screen time in the first and second acts of the movie, allowing Wiig to flex her mastery of social awkwardness and cringe comedy as we meet the bookish Barbara. She and Diana are coworkers at the Smithsonian, and they quickly build a friendship after their first workplace meeting.

But after Barbara and Diana make wishes that grant Barbara the superhero strengths and sex appeal she envies of her new friend (and give Diana her boyfriend back), the film largely forgets about Barbara. She becomes nothing but a secondary villain, a footnote in the larger story.

Barbara’s relative lack of screen time doesn’t allow us to explore what makes the character tick — how evolving from a sheepish scientist to a sexy femme fatale affects her psyche. Perhaps the movie showed its hand in the first place: We never learn much about who Barbara is, anyway, beyond that she’s nerdy, lonely, and would trade everything in the world to be stylish, popular, and admired. But this surface-level adaptation is a waste of a character who, in the comic books, is Wonder Woman’s complicated, fascinating arch-enemy.

Like fellow supervillains the Joker, Lex Luthor, Magneto and others, Cheetah is beloved and renowned for having her own array of traits and flaws — she’s more than just “evil.” The beauty of these bad guys is that while we might not agree with them, we can fully understand why they act in the way they do and be a conduit to think about our own fallacies and tragedies.

And a shallow Cheetah isn’t just a disappointment for the viewers. It actually shortchanges Wonder Woman herself.

Why is Cheetah, umm, a cheetah?

Barbara begins the film as an insecure, bookish nerd. “Lonely single woman” is a trope that a lot of superhero movies rely on to create their villains, particularly female villains —like Catwoman in Batman Returns, Poison Ivy in Batman & Robin, and even Harley Quinn from Suicide Squad and Birds of Prey fame. A common flaw in some of these portrayals, though, is that the nerdy-to-sexy transformation is more concerned with aesthetics than character traits. These transformations ultimately leave the character’s intelligence, emotions, aspirations, and interior life unexplored.

That lack of curiosity is on display in WW84, as Barbara’s happiness is solely determined by the way she looks. She goes from self-conscious to wearing skin-tight outfits, and ends the film as an anthropomorphic cheetah, without much explanation. And that surreal evolution says plenty about how the movie sees her.

Barbara’s transformation into Cheetah in the comic books is, like a lot of comic book origin stories, messy and weird. Her story has been written over and ret-conned multiple times, but usually, it involves a deity named Urzkartaga who grants Barbara godlike powers; Barbara either actively seeks out these powers or is cursed with them against her will. While these stories can be uncomfortable to read now (a lot of older comic book stories don’t age well because of outdated, casually sexist views) and strange (one version of Barbara’s origin story is that her transformation to Cheetah goes sideways because she’s not a virgin, condemning her to a life of pain in human form), they at least tell us more about the character, what these new demigod-like gifts mean to her, and how they affect her life.

Granted, delving into the complexities of adding another god into the mix and how that shakes up Barbara’s evolution Urzkartaga might have been too convoluted to spin into a story on screen. But what we got in WW84 had almost no depth at all: Barbara just wants to be beautiful, strong, and desired, and that is all that drives her.

From what little we do know of Barbara’s personal life in WW84, it doesn’t seem like she’s got it too bad. She’s smart and has a good job at the museum. She regularly brings food for a homeless man on her walks home from work. The worst part about being Barbara is that she doesn’t get the attention of men whom she has crushes on. When she gets her initial powers from the mystical dream stone that the FBI turns over to her for inspection, she’s as happy as she’s ever been, far less lonely and much more respected by her peers. But we don’t see how this so-called “monkey’s paw” negatively affects her life, save for not remembering to give her homeless friend food and maybe being a little too physically aggressive in public.

Because we don’t know how truly bad or how good Barbara’s life was before her transformation, it also doesn’t quite work as a power fantasy. It could’ve been more powerful if WW84 explained how, despite how smart she is, Barbara’s been overlooked at work for promotions, for example; we only get scant traces of how ignored she is by everyone. The film would have even benefitted from just a small explanation of how Barbara found herself interested in gems and the ancient world in the first place.

The lack of foregrounding hinders the impact of Barbara’s ultimate transformation into Cheetah. We’re left to infer based on what little the movie gives us as to why Barbara is now a feline, in particular; Barbara turns into a Cheetah because she needs to stop Wonder Woman from undoing all of the wishes from the wish-granting rock, and even though she kicked Wonder Woman’s ass in her current form, maybe she needs to transform into Cheetah — an “apex predator,” she tells Lord — to ultimately defeat her. I guess. Who knows?

But even if this generous read is the extent of it, there’s no real moment where we see Barbara reflect upon her lost humanity or weigh what it means to turn into a furry cat-human. We don’t even see the moment in which she turns into a cat! Maybe she likes her new form, despite not showing any inclination of wanting to turn into a cat before arriving near the film’s climax all covered in fur. Maybe she hates this trade but is forced to stay as a weird, vaguely hot cat-person because it’s more agile than her human body was before. Either one of these storytelling options would be valid, and it’s a shame we didn’t get anything remotely close to Barbara’s psychological state or interior life in WW84.

The most frustrating part of the film’s portrayal of Cheetah is that it could have been an opportunity to show Wonder Woman’s own flaws and heroism in relief.

In the opening sequence, during the Amazonian CrossFit games at Themyscira, a very young Diana is portrayed going up against Amazons in their peak who are older, taller, wiser, stronger, faster than her. Yet, thanks to her demigod blood and ingenuity, she begins beating each one in an Ironman-type race. But bad luck knocks her off her horse, and though she makes a sterling recovery and almost wins the entire thing, Antiope, the Amazon general who also mentors Diana, disqualifies her. Diana throws a tantrum as she watches another Amazon win instead.

I loved this scene, because it showed that Diana, despite being good-hearted and wanting to protect people, also has an ego. She’s in love with winning and always seeking approval, which director Patty Jenkins gets at in the first movie. In the similar training sequence from the original, Diana is seen smirking as she’s kicking every Amazon’s ass, including taking down Antiope herself. As she defeats each one, Diana looks up at her mom Hippolyta, as if proving she’s the best will spur some kind of positive reaction. She wants her mother’s praise, which led to Diana’s biggest flaw as an adult: Diana absolutely hates losing.

When Barbara starts getting stronger and displaying the same powers as Diana, Diana’s desire to be the best could have bubbled up, showing that, despite being a demigod, she was just as human as the rest of us. It’d be more beguiling if Diana’s beef with Barbara wasn’t just about stopping Maxwell Lord and righting the wrongs of the magic rock, but also because Diana can’t fathom being second-best. Does she want to save her friend or is she threatened by her? Maybe both.

It would have been more uncomfortable to see Diana weigh being a goddess and her love of Steve Trevor, if just Barbara was in the picture and not Maxwell Lord. Eliminating Lord from the story entirely could have allowed for more time devoted to Barbara and Diana’s story — granting them more emotional depth, and more room to flesh out their parallel stories about loneliness, ego, admiration, and love. You know, all the things that Lord received throughout the movie.

As is often the case with the comic books, Diana grappling with her own flaws and her own humanity is more interesting to me than defeating a villain. Her superhero strength, invulnerability, and super speed do not guarantee that she’s always better than the rest of us. Overcoming the ego and anchoring that power with responsibility is what makes Diana a hero. It’s a shame we never go to see that journey, but perhaps if we’re lucky, we might get to see it play out in the just-confirmed third movie — perhaps one where Barbara gets her rightful story to become Cheetah.