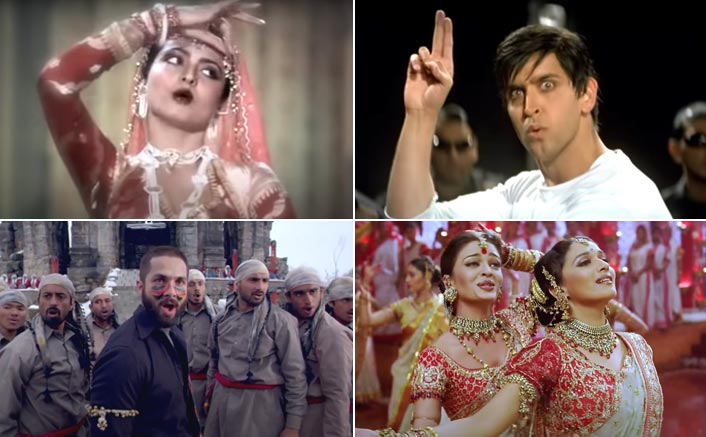 Bollywood movies are incomplete without dances – and there is no denying that! We all love to see the beautiful choreographies that place in the Hindi film industry. And some of these dances hold a special place in our heart.

Hrithik Roshan’s astonishing moves in Main Aisa Kyun Hoon to Shahid Kapoor’s high energy performance in Gandi Baat & Bismil still hold a special place in our hearts. Not to be left behind, the leading ladies of Bollywood too have shown us their moves in spellbinding choreographies. From Rekha In Dil Cheez Kya Hai to Madhuri Dixit-Nene & Aishwarya Rai Bachchan in Dola Re Dola – their expression is still fresh in mind.

From complicated dance moves to the stars’ expression and their costumes and set designs – here’s our pick of 10 Bollywood dance choreographies that are pretty tough but the actors aced with grace and beauty. Check them out!

If there is any leading lady in Bollywood who can match the steps of Prabhudeva, it is Madhuri Dixit-Nene. The actress was able to keep up to his energy levels and complex step in this 2000 film and proved what a good dancer she is – yet again. Prabhudeva choreographed this Pukar track.

Another song featuring a challenging choreography in Bollywood is Muqabal Muqabala from 1994 film, Hum Se Hai Muqabala. Also choreographed by Prabhdeva, this song is set in against a Western setup where his dance moves – especially the isolations – are mesmerizing. The ‘running man’ step and more were totally jaw-dropping.

Remember the moment where he appears in the white suit? I don’t think any of the young actors can match that level. The song was partially recreated in the 2020 Bollywood film, Street Dancer 3D.

A Prabhudeva directorial, Gandi Baat featuring Shahid Kapoor was also choreographed by him. Shahid is a trained dancer but the moves in R…Rajkumar was something that could have been a challenge for him too. Those jumps and floor work with the insane amount of energy is one of the toughest Bollywood routines we have seen. Only a few actors may be able to pull it off with the same ease as Kapoor.

Making her way once again in our list is Madhuri Dixit-Nene along with Aishwarya Rai Bachchan. Choreographed by the late Saroj Khan, the show was a unique dance duet that saw the beautiful ladies show off their expression along with some classic Indian dance moves. The steps in the songs are a blend of the Kathak and Bharatnatyam dance forms.

Dola Re Dola from Devdas has gained much love and recognition that any duets featuring two Bollywood actress have always been compared.

Our list cannot be complete without mentioning Hrithik Roshan. The actor, who is trained Shaimak Dawar, pulled off this Prabhudeva choreography that still astonished us. When we look at the dance moves, we still wonder – How? Just how did the choreographer think these moves and what control does HR have to pull them off with such grace.

I tried copying the steps when the song released and failed miserably.

What do we saw about this? Rekha’s performance in Dil Cheez Kya Hai from Umrao Jaan is a perfect mix of elegance, dance, Indian culture and some breathtaking choreography. Choreographed by Gopi Krishna, the Bollywood song is still fresh in our mind, and NO ONE can replace Rekha.

Shot on top of the Ooty train (the Nilgiri Mountain Railway) in mountainous Tamil Nadu, this Farah Khan choreography saw Shah Rukh Khan, Malaika Arora and other dancers set the screens on fire. The headbang is still something we do every time the song is played. In case your wondering why it is on our list, the reason is the actors dancing on the train – while it is moving.

Bismil from Haider is a manifestation of the traditional folk dance Dumhal of the Kashmiri valley. Performed by the menfolk of the Wattal tribes, the dance sees the performers move in a ritual manner and dig a banner into the ground on set occasions. The energy, those jumps and expressions make it one of the toughest choreographies in Bollywood movies. Sudesh Adhana choreographed it.

Another Gopi Krishna choreography, this song was released in 1966. Set as a dance-off between ladies fighting to be crowned the Rajnarthaki (Royal Dancer) of Vaishali, it sees Vyjayanthimala winning the title. Even with it being over 50 years old, it is refreshing to watch and see how much dances had evolved in Bollywood.

Agga Bai from Aiyyaa saw Rani Mukerji in a never seen before avatar. Vaibhavi Merchant choreographed this track that saw her move her hips (and other limbs) to belly dance steps. The grace and ease of this performance is something only a trained belly dancer may achieve, making it a tough Bollywood choreography. This film also saw Rani perform a Lavani number.

Which is the touchest dance choreography in Bollywood according to you? Let us know in the comments.