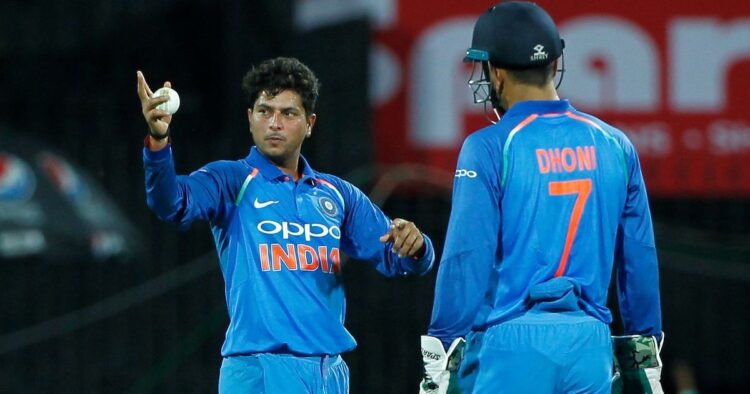 Michael Vaughan, ex-England skipper believes left-arm wrist-spinner Kuldeep Yadav has remained the same since he arrived on the scene of international cricket in 2017, and the opposition batsmen have figured him out.

Indian leg-spinner Kuldeep Yadav struggled in the first two ODIs against England and was replaced by pacer T Natarajan for the final 3rd ODI. The left-arm spinner went wicketless in the two games. In the first ODI, he was hit for 68 runs in 9 overs. In the 2nd ODI, Kuldeep Yadav was hammered for 84 runs in 10 overs.

Michael Vaughan: Kuldeep Yadav Was Helped By MS Dhoni From Behind The Stumps

There was a time when Kuldeep Yadav was an irreplaceable member of the Indian team, especially in limited formats ODIs and T20Is. But his recent struggles in limited formats have caused a worry for India’s spin bowling department in the limited-overs.

Former England captain Michael Vaughan believes Kuldeep Yadav has remained the same since he arrived on to the scene, and the batsmen have figured him out. Michael Vaughan also said that there is no MS Dhoni to help him from behind the stumps anymore.

“Clearly, when MS Dhoni was behind the stumps, he (Kuldeep) had a captain and a think tank who could help him out,” Michael Vaughan said on Cricbuzz.

“I think, more so, it was the fact that Kuldeep Yadav was not seen by many teams, and he probably surprised many teams. And MS Dhoni behind the stumps intimidated the batsmen anyway because he is MS Dhoni.”

“Just a yard away from where you are striking the ball. But I think it was also a fact that Kuldeep Yadav was new onto the scene, a young leg spinner and it always takes a bit of time for batters to use to the deliveries. What’s he got, how is the googly coming in, what kind of variations he’s got?”

Kuldeep Yadav has had a tough last few years in international cricket. His figures in the ongoing ODI series read 0-152 in 19 overs. He was preferred over spinners Yuzvendra Chahal and Washington Sundar in the first ODI against England but produced regrettable figures of 0/68 in nine overs while other bowlers excelled and he was given another opportunity in the 2nd ODI failing which he was dropped from the 3rd and final ODI.

The chinaman spinner has only played 7 ODIs from January 2020 for India. He wasn’t even a regular in the Kolkata Knight Riders (KKR) squad for the Indian Premier League (IPL) 2020 campaign.

Michael Vaughan: Kuldeep Yadav Hasn’t Got Better As He Has Probably Stayed At The Same Level

Kuldeep Yadav is down on confidence and is struggling as in his last 7 ODIs, he has conceded more than 50 runs every time in his spells and taken just six wickets.

“Looking at him, I don’t think he got better. He’s probably stayed at the same level. In IPL cricket, if international cricket, if you are not bringing something different to your game, particularly as a leg-spinner – a subtle variation, change in pace, and angle change – so, I think he has been found out a bit,” Michael Vaughan added.

“He has stayed at the same pace, very very slow. He’s got a slow leg-spinner and slow googly. These players got all technology to watch delivery over and over again on the video screen. They can see absolutely everything – any clues Kuldeep Yadav gives before he bowls those deliveries.”

“That is what has happened. Kuldeep Yadav has been found out a bit, I don’t think he has not brought anything new to his game. The challenge for him is to go to the IPL and bring in something different,” he signed off.

Notably, Kuldeep Yadav has time and again missed out on a berth in playing XI despite travelling with the team consistently. He played one out of the 4 Test matches against England but did not get a place in the squad for the T20I series. The 26-year-old chinaman spinner Kuldeep Yadav finally played the 2nd Test against England after the one against Australia in January 2019.  He debuted in all three formats in 2017 but has only played 7 Tests., 61 ODIs, and 21 T20Is.