Home News I made a mistake: Kashmiri-footballer-turned-militant’s last confession

I made a mistake: Kashmiri-footballer-turned-militant’s last confession 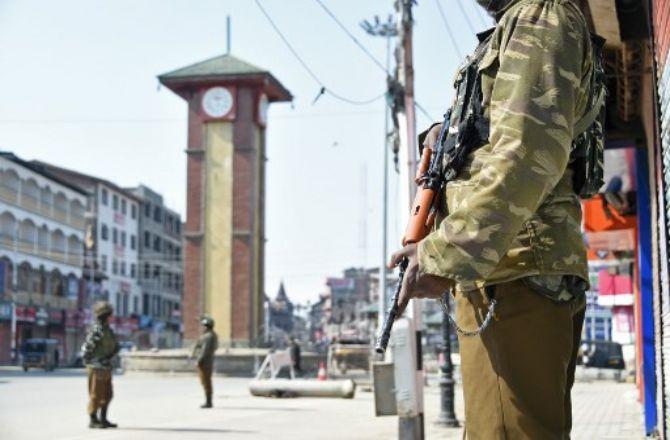 A footballer-turned-militant from Sopore regretted joining terrorists’ ranks, according to his last conversation which went viral before he was killed by the security forces in a gunfight last week.

The phone conversation between Amir Siraj (A), and apparently his father (B), reveals how Amir was indoctrinated and regretted the decision of joining the terror outfit.

Amir’s family has called the audio clip fake and said that no such conversation took place between him and his father.

SSP Sopore, Javed Iqbal told IANS , “There is a possibility that he might have called his father in his last moments, it happens under such situations. However, I can’t confirm the authenticity of the clip right now”.

“If he called his father but he denies having any conversation with Amir, then may be the conversation did take place but the father has his reasons to say so, that’s a possibility too”.

A. We got caught.

A. In Kreeri. There is another one with me. Now, I wanted to surrender but there seems to be no way out. They are forcing us to do this. They warned me they would kill everyone in my family if I even thought of surrendering.

B. My dear, is there no way you can escape?

A. No there isn’t. I made a mistake. I was manipulated. They forcibly took my picture with a weapon and made it go viral. I wanted to come home but they warned me they would kill everyone in my family, father, mother, brother, everyone, if I ever did that.

B. What will we do? What will Boba do without you?

A. I made a mistake. I didn’t know better. I didn’t know where this path would lead me. Tell my brother and my friends to never think of following this path I took. Make sure they work towards building their future.

B. What will your mother and your sister do without you?

A. Tell everyone that the path I took has no future.

B. My dear, I did tell you to make something of your life that very day.

A. I wasted my life and I can’t come back now. I just don’t want anyone to go through what I did. They gave us a chance. Both the army and police gave us a chance to surrender but our own people threatened us. The enemy is always the one you hold close. I wanted to come out of this life. I wanted to come back to my parents. I would serve you, work hard and make something of my life but I don’t have that chance anymore. Now my fate is sealed. But I want you to make sure that what happened to me doesn’t happen to any of my friends or family.

B. My dear, if you can still find a way out, please try.

A. There is no way. Don’t tell anyone in my family. I have to accept my fate and I pray no one gets to die like this…I asked everyone to forgive me for my mistakes and transgressions and I want you to tell those I hurt to forgive me. I want to come home, make something of my life but it’s too late now.

B. What will your mother do?

A. I would surrender now if I could. Army and police gave us every chance, it’s the people I thought to be our own who force us to die like this. I don’t want you to get hurt because of me.

B. I had told you the path you took was a wrong one.

A. There is another person with me. He is hurt and…(End Of Conversation).

Amir Siraj (22), a BA final year student and a football player from Khawaja Gilgat, Sopore, had gone missing in the afternoon of June 24. It was later found that he had joined the terrorist outfit Jaish-e-Mohammed. Last week, Amir along with another Jaish terrorist, Umar Abrar, was killed after a long-drawn gunfight with security forces at Wanigam Payeen, Baramulla.

Sources said that Amir apparently did not have any past terror links, however, he was indoctrinated in Sopore’s Adipora village, which has a strong ideological base for terror recruitment.