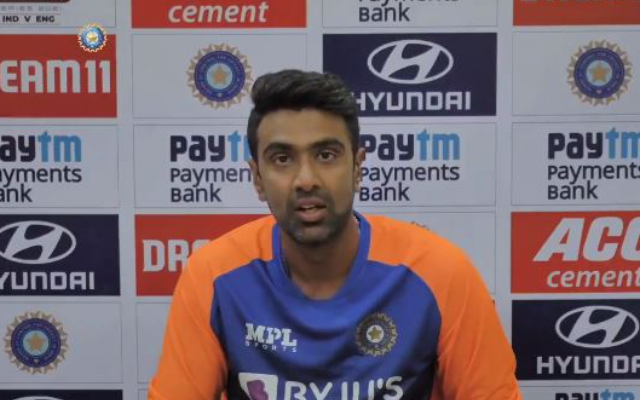 Ravichandran Ashwin has put all those talks about the deteriorating pitch in Chennai to rest after smashing an enthralling hundred on Day 3 of the 2nd Test between India and England. At the end of day 2, former England players such as Michael Vaughan and Graeme Swann raised questions over the pitch being used for the 2nd Test.

Though not everyone was against the Chennai pitch as Shane Warne came out talking about how conditions have been the same for both sides from ball one regardless of which team batted first. In all this agony, India‘s Ravichandran Ashwin launched one of his best knocks in Test cricket as the local boy from Chennai played a fighting knock of 106 batting down the order at 8 helping India put up a score of 286 in the 2nd Innings.

Ravichandran Ashwin not only did he score an all-important century batting down the order but also picked up a 5 wicket haul during England’s first innings. In the final few minutes of the 4th Innings on Day 3, Ashwin also managed to scalp Rory Burns for the 2nd time in this series.

‘Last time I was sweeping, I was 19 years old’ – Ravichandran Ashwin

At the end of Day 3, Ashwin spoke about how he wanted to bring the sweep shot into the game to counter England’s left-arm spinner Jack Leach but the only hindrance in between was the last time he swept multiple times during the same match was when he was 19 years old.

“I will sleep well through the night, that is all that I am thinking. Even after the last Test, we spoke about how we are going to counter Leach and probably bring sweep to the game. Last time I was sweeping, I was 19 years old, I hit a bit of sweep shots well today. I am thankful the plan has paid off. Sort of had a very good day.”

The off-spinner further credited India’s batting coach Vikram Rathore for the change in his batting gears in the last few Test matches. The last time Ashwin played a witty knock-in Tests was during India’s tour of Australia where Ashwin batted close to four hours in a partnership with Hanuma Vihari to help India play out a historic draw in Sydney.

“I can’t say it’s been happening in the last three days, I have been practising with Vikram Rathore (batting coach), I would love to credit him with how my batting has come through over the last four-five matches. I don’t know when the next Test is going to be here, but I am pleased.”